A sleepy, southern town where the pace is so slow, I could conceivably age out of menopause while waiting for a red light

I may have mentioned once or seventeen times that I was born, raised and still live in western New York and that everyone in my immediate family up and scampered for greener, warmer, prettier, gamblier, Golden-Gate-Bridgier pastures long ago. My parents moved down to Southern Pines, North Carolina, my brother to Las Vegas and my sister to San Francisco.

Leaving me to rhyme out loud WHAT THE HELL? DO I SMELL? all by myself in western New York in the dead of several winters to anyone who would listen which was no one because everyone either abandoned me for greener, warmer, prettier, gamblier, Golden-Gate-Bridgier pastures or stayed put and froze to death.

For awhile, I took it personally.

Then I realized that my family moving to those places meant that I was going to have some pretty awesome places to visit because leaving your high-strung, uptight kin who already suffers from abandonment issues thanks to a five day stint in the neo-natal unit at birth because her twin brother hogged all the umbilical cords in utero which left her malnourished and tense and questioning her place in this cruel world, means that you are morally and ethically obligated to let her visit you anytime she wants.

You’re probably legally obligated to as well but I’m too lazy to look it up.

Then I thanked my parents and my brother and sister for not moving to Buffalo or Camden, New Jersey or anywhere in Pennsylvania. 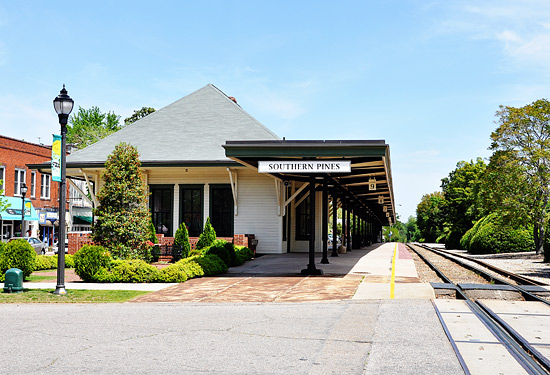 This is the little train station that sits smack dab in the middle of Southern Pines.

Can you even stand it?

There’s something so Fried-Green-Tomato-ish about it, don’t you think?

Except there’s no Whistle Stop Cafe and no Idgie or Ruth or Big George stirring a pot of steaming hot barbecue, presumably with bloody remnants of a murdered wife beater’s corpse floating around in it. 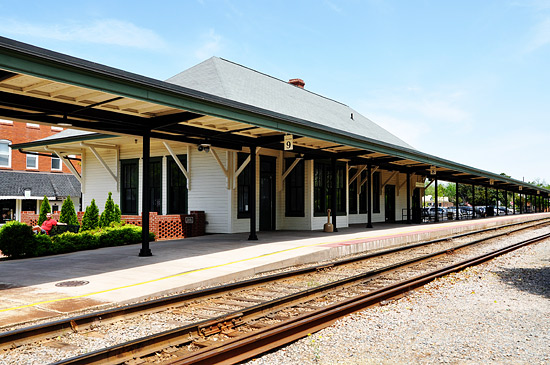 The train pulls in almost every night around between 11:00 p.m., and midnight with its whistle echoing past the shops, through the town and all the way into the spare bedroom windows of my parents’ house.

It’s a comforting sound, almost like the town is welcoming me home, wishing me a good night and whispering to me not to let the bed bugs bite and then softly laughing because it knows all too well that no bed bugs will be biting since I inspected every inch of our hotel room the previous night before I’d let Nate and the kids unwrap themselves or the luggage from the shrink wrap.

I love that train whistle.

Except when I’m exhausted from a full day of driving to and from Myrtle Beach, narrowly escaping Jaws, losing at Scrabble three times in a row to my mother who can’t keep her grubby little hands off the triples and then repeatedly explaining to my husband that no, we cannot have sex anywhere in the entire state of North Carolina because my parents might hear us and no, you only wish the whistle was that loud and yes, actually, it would be the end of the world since they still think we ordered the kids from the Pottery Barn catalogue. Then, and only then, does the train whistle irritate me to the point of yelling FOR GOD’S SAKE, I DON’T GIVE TWO SHITS THAT YOU ARE ARRIVING, WHOEVER YOU ARE.

Unless you are Anderson Cooper, in which case, I very much give two shits that you are arriving. Three, even. 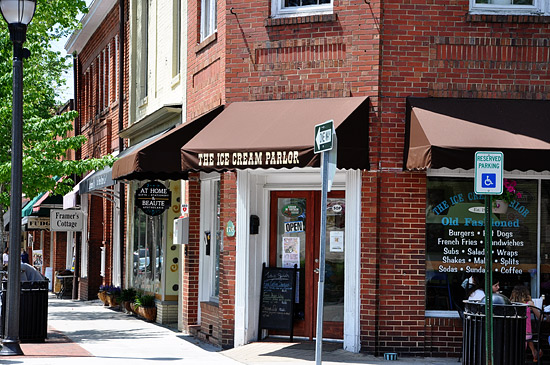 Every good southern town needs its own ice cream shop.

And it absolutely has to be on a corner and have “parlor” somewhere in its name or it simply doesn’t count.

Somewhere out there is a town zoning board with my name on it. Spelled correctly, in big neon lights, with the words “smart, talented and gorgeous” prefacing it.

Not that I’ve given it much thought. 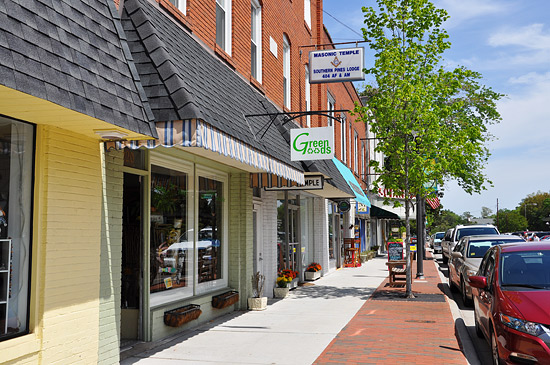 This is Green Goods, an eco-friendly store right on Main Street. 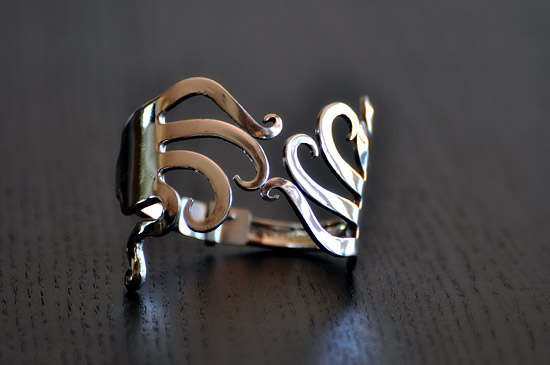 It’s where my mother, an avid fan of recycling herself, bought me this fork bracelet a few years ago.

Is this not the coolest thing?

It almost made me forget about earlier that day when she smacked me upside the head for tossing an aluminum lid into the trash can instead of the recycle bin.

She’s freakishly strong for her age. 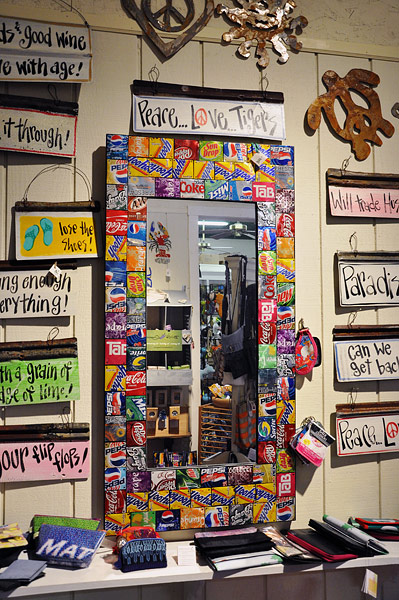 I thought this would look amazing in Zoe’s dorm room at college next year! Except, what is up with all the Yoo-Hoo? Couldn’t they have thirsted for something a little more color-coordinated? 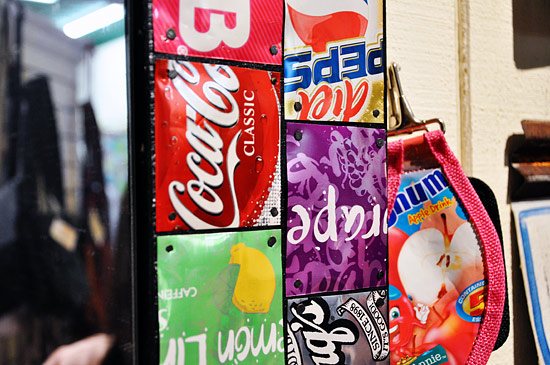 OH MY GOD I REMEMBERED SOMETHING.

Twenty plus years ago, when my ex-husband Dave and I were looking for our first home, we went to an open house that was advertised as having a second family room in the finished basement. The realtor showing the house would not shut up the entire time we were there and as we walked downstairs into the basement, he yammered on loudly and enthusiastically about the brand new wall-to-wall carpeting and bar, both installed by the bachelor who owned the house.

Poor guy. He was probably hoping that we’d never even notice that the walls were covered, from floor to ceiling, with thousands and thousands of empty beer cans.

The sheer amount of blood, sweat and cirrhosis that went into those walls was impressive, to say the least. That is, if I could have said anything at all, which I couldn’t, since I was pretty much rendered speechless.

One of the few times in my life that that has ever happened.

Another time was when my mucus plug dropped out of nether regions and splashed  into the toilet.

Just to give you some perspective. 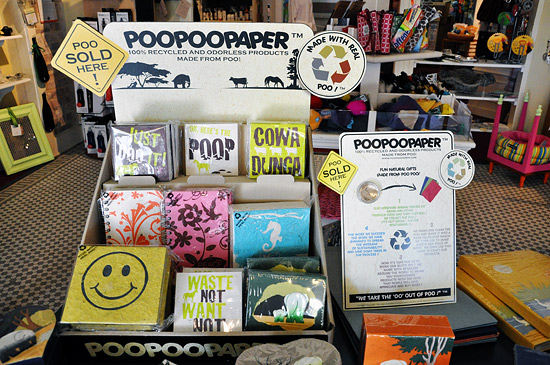 Look at what else they sell! 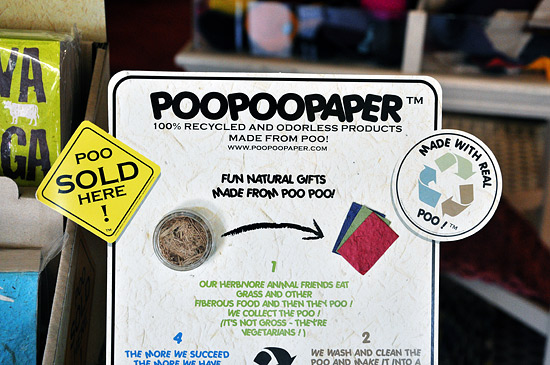 Believe it or not, this stuff was actually kind of cute and hey, talk about re-purposing!

I do believe I might have found Oliver’s calling in life. Who knew pooping behind the couch could one day be considered a humanitarian effort?

I wound up not buying any of the PooPooPaper because then I’d have had to bring it back to mother’s house and she’d be all Well, isn’t that just the niftiest idea? And I’d be all Yep! And before you know it, someone would be all OH MY GOD, IS THAT A COLANDER IN THE DAMN TOILET? And then frantically rifling through a desk in search of a valid Power of Attorney to get her mother committed. 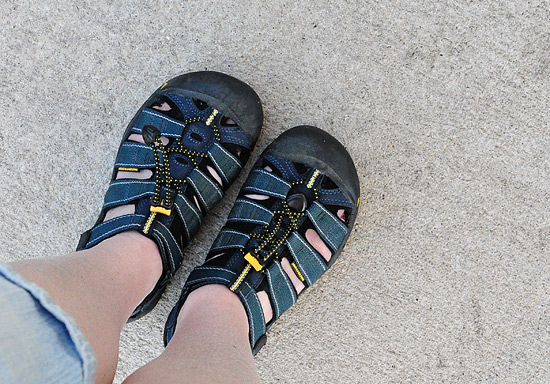 These are my new Keens. Child size 4.

They have nothing to do with my love of Southern Pines. I just like ’em. Even though my kids hate them and think they make my feet look like somebody beat them to death with an ugly stick.

And no, I have no idea where the entire right side of my shorts are. They were there when I put them on in the morning. 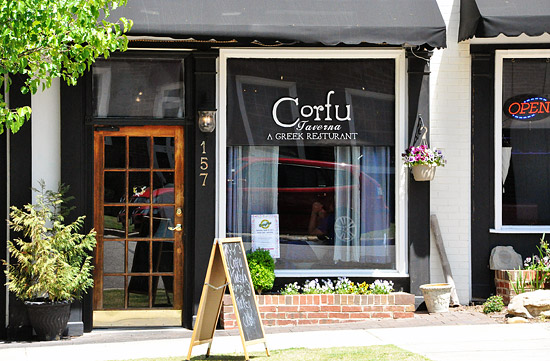 Corfu, the best Greek food in Southern Pines, bar none.

Well, except my mom’s own kitchen.

Unfortunately, not everyone is lucky enough to eat dolmades and pastitscio and avgolemono and kourabiethes in my mom’s kitchen but really, Corfu is the next best thing.

And bonus! Corfu doesn’t stuff their toilets with strainers or slap their customers when they accidentally throw recyclables into the trash or sneak cigarettes in their bathrooms under the guise that it helps them with their bowel movements. 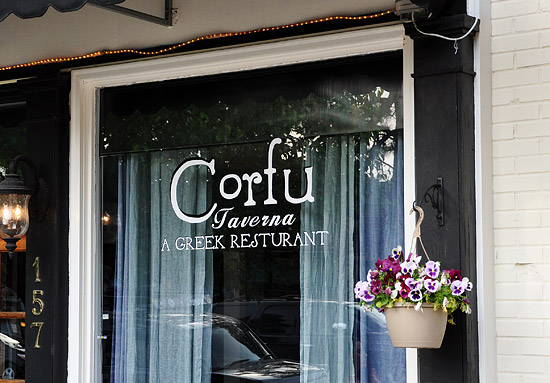 Trust me, their food is much better than their spelling. 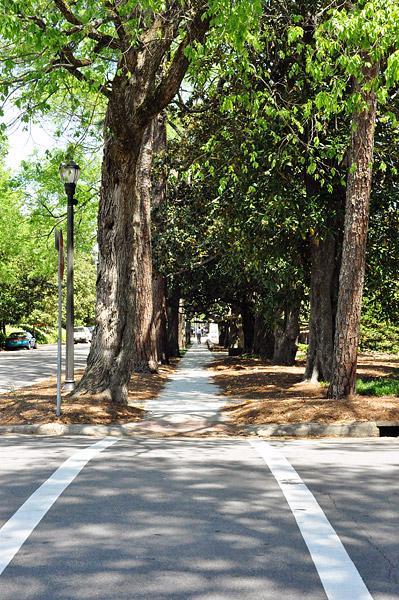 13 thoughts on “A sleepy, southern town where the pace is so slow, I could conceivably age out of menopause while waiting for a red light”