Are you allowed to issue an Amber Alert for your waist?

There were several moments in San Francisco when I thought that I had died and gone straight up to the pearly gates and they actually opened for me without bribes or coercion or a WHO ARE YOU AGAIN accompanied by a DNA swab and eyeball scan.

Or when I stepped foot into the Harry Mason shop.

Or when, after walking four years up hill to get to the top of Coit Tower I spotted, through my hysterical tears, a bus parked outside the tower and realized that we weren’t going to have to finagle me a pair of prosthetic legs out of twigs and tree bark and then hire a sherpa to get us back down to civilization.

And then … there was the moment I first laid eyes on this in Ghirardelli Square: 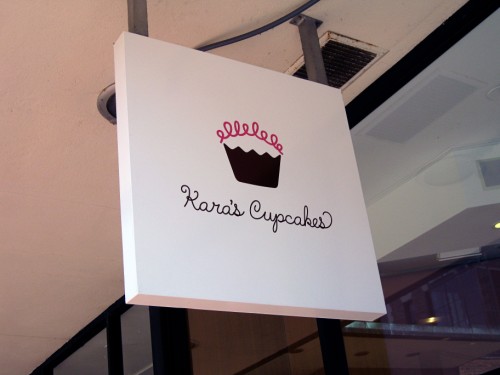 If you asked me to describe this place in three words, I’d cry and run in circles for five minutes and then hide under my bed in a fetal position because being put on the spot makes me channel my inner two year old. I’d drag Nate over here to tell you that I speak the God’s honest truth but I can’t because he asked me an hour ago what I was going to do with the rest of my life and now I’m too dizzy to crawl out from under here and go find him and besides, I DON’T WANNA AND YOU CAN’T MAKE ME SO THERE.

But if you gave me a day or so to think about it, I’d come up with “Bye Bye Waist” but only because “Multiple Simultaneous Orgasms” is way too naughty for this blog. 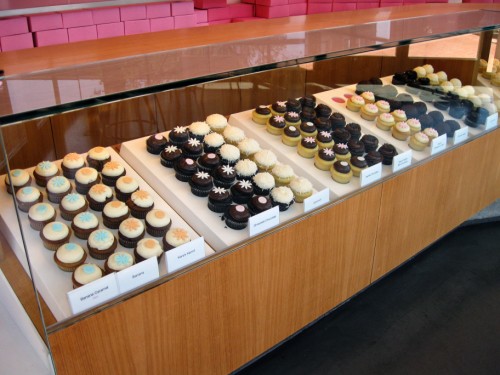 Just look at them. I tried to concoct a plan to distract the employee so that I could crawl into the case and shove all of them in my purse or down my throat but Helena refused to stand outside and yell HELP! ANGELINA AND BRAD JUST TRIED TO ADOPT ME because apparently she didn’t want to make a spectacle of herself. I was all “Helena, you make a spectacle of yourself all the time at home, what’s the problem?” and she was all “But Mom, that’s at home and besides, I know you’ll always love me unconditionally, no matter what I do” and I was all “That’s true, as long as you do as I say, so start screaming” and she was all “But what if I get arrested? Or Brangelina sues me?” and I was all “Who cares? It’s cupcakes.”

But she wouldn’t go for it. 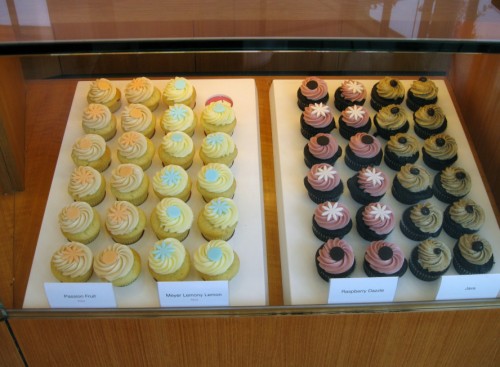 They were really good. Totally worth the $3.25. And even bail and a few attorney’s fees, I think.

And then, in Monterey, we came across the Eighth Wonder of the World: 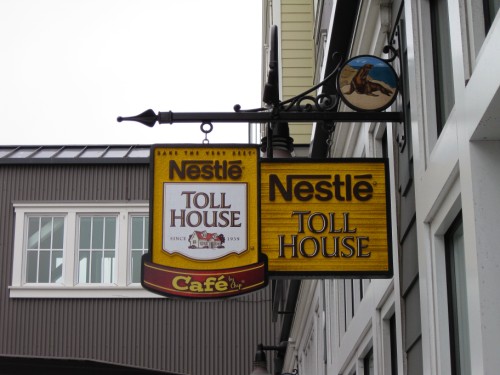 Excuse me while I pass out from sheer ecstasy.

When I looked up and saw this sign, angels zoomed around my head on green polka dotted Segways and the Mormon Tabernacle Choir belted out Hallelujah while wearing Speedos and riding plaid hippos down the sidewalk.

Sometimes my hunger-induced hallucinations freak me out.

Nevertheless, I told Nate to just leave me be and go on about his business and come back for me in about eight years so that I could become morbidly obese without distraction. 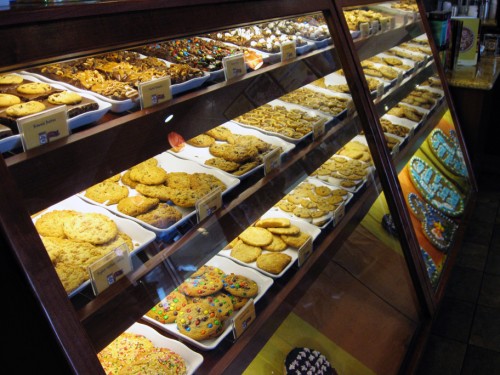 Have you ever seen anything so obscenely decadent in your life?

I had one of everything.

Then we walked down Cannery Row a bit and came across the Candy Factory, otherwise known as Nirvana. 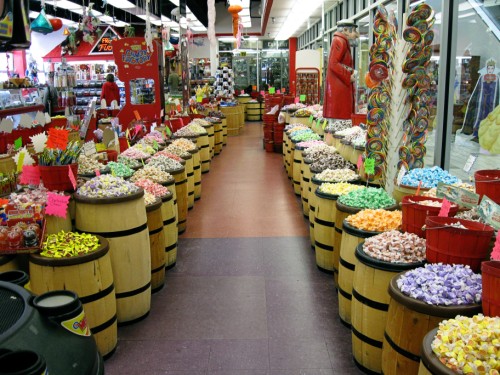 We almost lost Helena in the Butterfinger barrel –  she dove in and tried to eat her way to the earth’s core. Luckily, Nate hates candy so he had not slipped into a sugar-induced coma and was alert enough to yank Helena out by her ankles.

I would have totally been there if I hadn’t been distracted by the Milky Way barrel.

I’d say like mother, like daughter but that wouldn’t paint a very flattering picture of me, now would it? So I won’t. 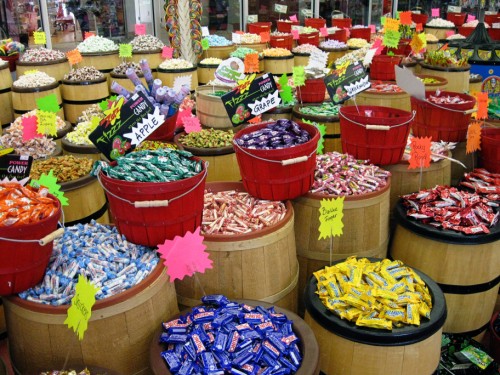 I don’t think it will come as any surprise that our luggage wasn’t the only thing that weighed more on the trip back.

But at least the airline didn’t charge me for the extra chin.

26 thoughts on “Are you allowed to issue an Amber Alert for your waist?”