She loses about an inch of height a year. Pretty soon, I’m going to have to look under the coffee table for her.

She golfs a couple of times a week in the summer. She just golfed last week with my 79 year old dad and my 39 year old husband and held her own, as she always does. It was 210º outside.

I don’t golf anymore period. It doesn’t matter what the thermometer says.

She bowls during the winter.

I tried to bowl but even the lightest ball was too heavy for my pathetically weak wrists.

She’s incredibly physically fit and has better looking legs than I do.

She used to live down the street from us when we were growing up. I loved her house. It was old and had gold carpet in the kitchen and a beautiful hearth and a scary basement.

I lived with her for a short time when I was losing my mind during a two year period and she knew I needed some space. She’s always been there like that.

One time when I was really young, I was in her bathroom and found one of her lipsticks and played with it and forgot to turn it down before I covered it and I smooshed it. I started to cry and went to my aunt and admitted my crime, wondering how she would dish out punishment. She asked me if I had learned a lesson, told me she was proud of me for telling her and gave me a hug. I’ll never forget that.

She retired from Xerox after a long, long, long time.

We grew up always having white paper handy to draw on.

She lost her husband about thirty-five years ago. It scarred her, it changed her, it saddened her but it didn’t stop her.

She used to call me up when I was a kid and ask me to go on bike rides that would make my ten year old lungs and legs weak with effort. She never broke a sweat.

She’s got more energy in her right ear lobe than I do in my entire body.

She’s got great taste in earrings and I borrowed a beautiful gold pair from her when I got married to Nate.

She’s the one everyone stays with when they come to visit because she’s got an extra bedroom with two twin beds and a long, gold couch that easily fits my brother. It’s older than I am. The couch, not my brother. We’re the same age. My brother and I, not the couch and I.

We don’t have any spare bedrooms in our house.

She knits and crochets and makes drop dead gorgeous afghans.

We have one of her afghans on our couch and one of her blankets currently resides on Helena’s bed.

She has the most beautiful angel tree at Christmas. I always stare at it, admiring all of her angel ornaments and try to guess which ones are new that year.

She bought us beautiful Lenox Christmas ornaments, one for each of us, with our names on them. I love those ornaments. We all do. We each hang our own on our tree every year.

She volunteered for Ronald McDonald house for over twenty years. When Zoe was young, Aunt VeVe introduced her to Ronald McDonald and Zoe was awed into silence. That didn’t happen often AT ALL.

I used to go over to the house when Aunt VeVe was volunteering and sit next to her and do some of my homework on their Mac computers because we didn’t have a computer.

She makes a special effort to get Zoe and Helena gifts for their birthdays and Christmas that they will love. She always calls me weeks in advance for ideas and badgers me until I give her specific suggestions.

She’s got great taste in kids’ clothes. I always love what she chooses.

Sizes, not so much but that’s OK because she always includes a gift receipt.

She’s got a very loud voice but she doesn’t realize it. So, when she exclaims “Oh my God, why is she so fat? She’s never going to fit there!” when someone tries to squeeze into a seat next to us at a wedding, I have to turn to her and whisper “shhhhhhhhhhhh.”

She keeps her condo at 83º. We sweat when we’re there but no one wants to ask her to put on the air because it’s her house. No one except me. I’ll just say “Holy crap, Aunt VeVe, it’s hotter than Hell in here” and she puts on the air. I’m subtle like that.

She drives by herself to New York City at least once a year to visit her 80 year old cousin and do up the town.

She drives by herself 800+ miles down to North Carolina to visit my parents. She takes two days to do it and won’t listen to me when I ask her to fly instead.

She doesn’t listen to my advice much.

I don’t like driving to the next county by myself. I’m a wuss. I think I mentioned that already.

In the past fifteen years, she’s traveled to Russia, Australia, Alaska, Japan and she went on an African safari and she’s been to a lot of other places that I can’t remember off the top of my head.

The last time I went someplace exotic was never.

I did go to Hawaii and France. But that was over twenty-five years ago for both so I don’t know if that even counts anymore. My old passport is currently at the bottom of Helena’s toy box.

She will go to extremes not to be a bother. Like not calling me when her washer line breaks and floods her condo as she frantically tries to turn her water off, can’t and winds up calling 911and then has to stay in her bedroom for two days to escape the noise of the fans as a cleaning crew fixes her carpet.

I tell her to call me when these things happen. We will come and help her.

And she says OK but then she never does.

Like when she was involved in a golf cart accident and smashed her knee to smithereens and had surgery and waited to call me until she was back home with a huge brace on her leg.

I repeat my instructions to call me when stuff like this happens, for God’s sake and I will take care of her. I need to know that she’s OK. OK?

She says OK but I know she won’t.

Like when she had a bad car accident three miles from my house which shut down the main road and required several fire trucks and ambulances and police cars and she refused medical treatment and was driven home by a police officer because she didn’t want to bother her niece. I found out the next day when she called my mother in North Carolina who then called me in New York to see what I thought about the whole thing.

And I said I would have had an opinion ready and waiting for her if I had only known about it.

I called her, confirmed she was OK, asked if she needed anything and then yelled at her in sheer frustration, asking why she didn’t call me, for shit’s sake, what the hell was the matter with her?

She doesn’t like to be yelled at and told me so.

I don’t yell at my aunt anymore.

She did tell me when she was having heart valve replacement surgery. My mom flew up to stay with her and we were both with her in recovery and I’ll never forget the feeling of despair I had when I saw her for the first time after surgery. I had never seen my aunt look frail and helpless. I expected her to wake up at any moment and tell the doctor how to do his job.

She recovered incredibly quick, surprising everyone, including her doctor, but not me. I knew she would. Because that’s Aunt VeVe.

She always invites us to dinner when my parents come to visit and stay with her. She makes the best breaded baked chicken.

She always feels guilty for asking Nate to help her out with something, whether it be her phone, television or computer. I keep telling her not to, that Nate is happy to help her, she is not a bother.

She doesn’t believe me.

She has never missed any of my kids’ birthday parties.

She was there for my surprise 30th birthday party, as well as my surprise 40th and I fully intend on seeing her at my 50th. But I don’t want a surprise party. Everyone hear that?

I have an 84 year old aunt and she is one of the strongest, independent, capable, intelligent, caring women I have ever had the privilege of knowing. 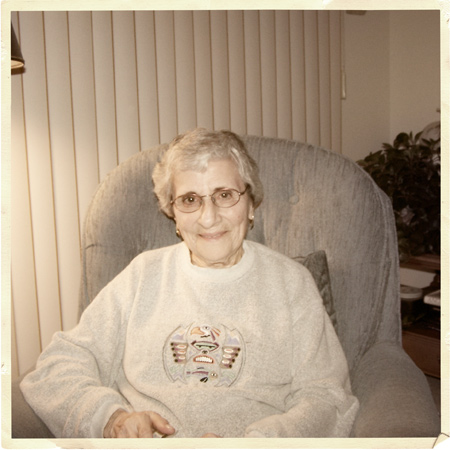