I have athlete’s feet! Without fungus.

Yesterday, I flew off my treadmill for the last and final time and as I was sitting there on the cement floor looking about wildly for my both my knee caps, left elbow and all my wits, I pondered why my treadmill likes to occasionally fling me through the air like a warped frisbee:

Hypothesis: I have lost so much weight that the treadmill cannot distinguish between me and air and shuts down automatically.

Hypothesis: The GFCI breaker is tripped.

Conclusion: The culprit about 25% of the time. Nate has replaced the GFCI breaker but it still trips occasionally, causing the treadmill to stop dead in its tracks and hurl me across the room and before I know it, I’m french kissing the cement floor and/or wall, depending entirely on the degree to which I was doubled over with muscle cramps while jogging at the time. I don’t even know what a GFCI breaker is, but I’m thinking whatever it is, it probably suffers from an inner ear infection that throws off its balance. Nate tells me to reign in the crazy, that the GFCI breaker has no human attributes and that it’s probably just a wiring issue. I like my explanation better because it means the damn thing has ears so it totally hears me when I holler YOU MISERABLE STUPID ASS PIECE OF CORRODED SHIT from way across the room where I lay prostrate after having been tossed like a hacky sack by the treadmill, thanks to a certain miserable stupid ass piece of corroded shit.

Hypothesis: The treads of my ancient sneakers, once rough and deeply creviced, have gone all Benjamin Button on me and are now smoother than a baby’s bottom. 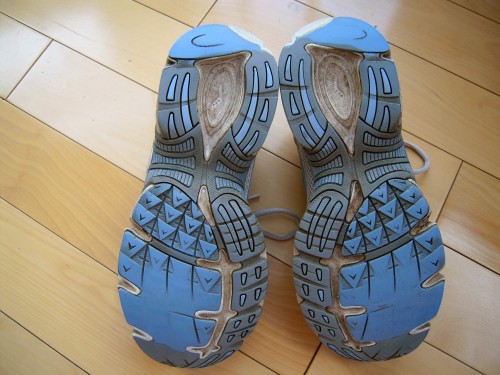 Let me introduce to you my sneakers.

They look about ten years older than they really are which, come to think of it, is the hallmark of everything I own, including my entire wardrobe, upstairs carpet, hair and that general area between my neck and my knees. 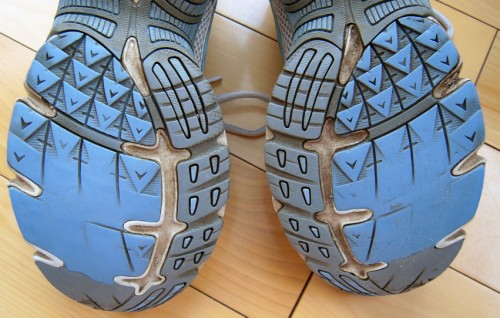 You know, I could just spread some bacon grease on the bottom of my sneakers before mounting the treadmill and be done with it. It would serve the same purpose but at least then, I could have a little snack in between my heart attacks and charley horses, especially while lying prone on the ground with nothing better to do than grow compound fractures all over my body.

I can’t believe I actually said “mounting the treadmill.” 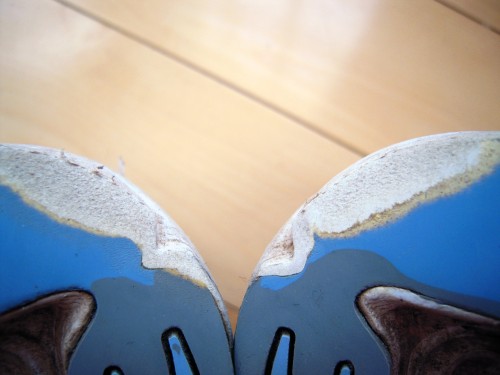 I’m not sure what happened here but I feel compelled to actually type the words I DID NOT GNAW ON MY SNEAKERS SO SHUT UP out loud lest you think my compulsive eating habits include rubber, plastic and foam.

But only because I don’t have enough Weight Watchers points for those kind of delicacies.

Although they’re probably loaded with fiber.

So yesterday was the last straw and I decided then and there while bleeding out on the cement floor of my basement that there was no point in me losing weight and getting healthy and abstaining from scarfing down a dozen donuts at one sitting if all it got me was winding up dead as a size 8 from a particularly nasty case of blunt force trauma.

So off to Dick’s Sporting Good’s I went and came home one hour later with these: 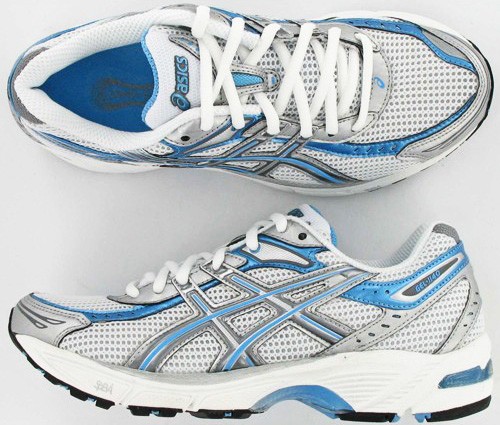 I kind of feel a bit athletic! Well, at least my feet do.

As long as that’s not the plural of athlete’s foot because I most definitely do not have that. I am allergic to fungi of all kinds.

Except mushrooms. Love me some ‘shrooms!

The edible kind. Not the other kind.

I fully expected to pay well over $100 for a pair of good running shoes and I was pretty proud of myself for being able to walk into Dick’s Sporting Goods of my own volition knowing that fact, without having to hold an actual gun to my own head. Because money and me? We’re tight. So tight that you usually have to use a crowbar to wrench it free from my cold, dead hands, even while I’m alive. We don’t part ways easily or frequently, money and me, which pretty much explains the existence of my entire wardrobe, several pieces of which probably experienced the eighties much harder than you ever did.

But these ASICS were last year’s model and on sale and I picked them up for $60 and I did the happy dance all the way home but not in my brand new sneakers because I didn’t want to get them dirty.

I did, however, wear them last night on the treadmill and I was not flung, tossed, thrown, heaved or hurled anywhere. I’d like to attribute that to my new shoes and not to the fact that the GFCI breaker apparently gulped down some amoxicillin and held its miserable stupid ass piece of corroded shit equilibrium in check.

So far, these shoes are totally worth $60. Now, if they can manage to beat my shin splints into submission, they’d be worth $100 and then some. No crowbar necessary.

30 thoughts on “I have athlete’s feet! Without fungus.”