I hope they taste more color-coordinated than they look

Time and I have an acrimonious relationship. I chase it all around my house, leaping through the air and tackling it, sitting on its head, stuffing it inside a box, wrapping it with excessive amounts of packaging tape and then ultimately flinging it down the stairs into the basement so that it never sees the light of day again.

It returns the favor by sneaking up the stairs, chewing through the door, rearing its ugly head and yelling IS THAT ANOTHER WRINKLE ON YOUR FACE OR ARE YOU JUST PISSED TO SEE ME? And then it burps really loud, scratches itself inappropriately and scampers out the window, running away from me yet again.

This year, at the beginning of December, I told time to STICK IT WHERE THE SUN DON’T SHINE, ASSHAT and then Zoe, Helena and I made these for gifts. We put our own spin on them because anyone who is familiar with Bakerella knows that trying to replicate her artistry is an exercise in futility and anyone who is familiar with my artistry knows I avoid exercise like genital warts, especially if it results in a self-esteem smackdown. I don’t know about you, but my self-esteem gets its daily recommended allowance of suck every time I pass a mirror. No additional emotional upheaval or exercise needed.

Or genital warts, for that matter. 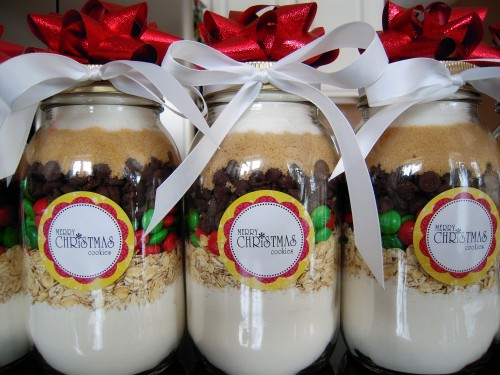 Bakerella suggests that you pack each level of ingredient down tightly and I’m here to tell you SHE MEANS IT, BUSTER. As you can see, we don’t have pecans in our jars. It wasn’t for lack of trying because I happen to love pecans and have been known to inhale them from clear across a room on those occasions when I’m too lazy to actually walk over and get them.

But even after stomping on top of these things with my bare foot for a good five minutes, we still couldn’t fit in any pecans.

I wore socks. They were reasonably clean. 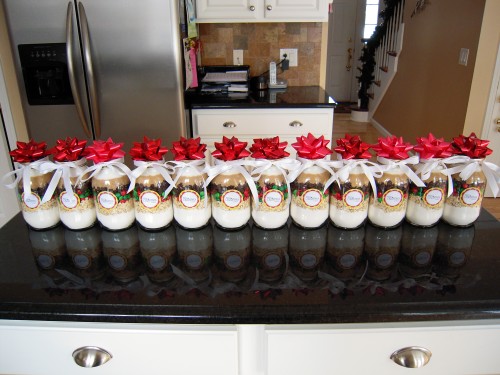 We didn’t do the fabric cover on top of the jars either. Oh, we tried and even made six separate trips to Joann’s for (1) fabric; (2) more fabric; (3) different fabric; (4) ribbon; (5) more ribbon; and (6) completely different ribbon. When all was said and done, however, our red & white snowflake patterned fabric tops made the jars look like homespun rejects from the local pizza parlor on Little House on the Prairie.

Yes, I know there were no pizza parlors on the prairie. But wow, wouldn’t life back then have been so much better with them? Then, if you were too tired to make dinner because you had been up since dawn chopping wood and hunting fish and skinning rabbits and sewing deerskin rugs and hemming your bloomers, you could just throw a couple of lanterns at your husband and tell him to hurry up, hitch up the wagon and go get that meat supreme with extra cheese two towns over. 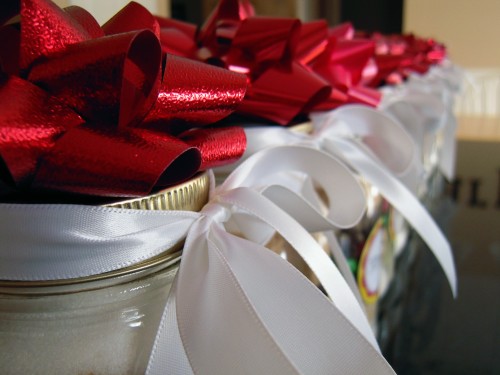 We wound up using simple red bows and white satin ribbon, for a decidely non-homespun look.

By the way, know how many stores around me carry bows?

Know how many of those stores carry red bows?

Guess which store it was? 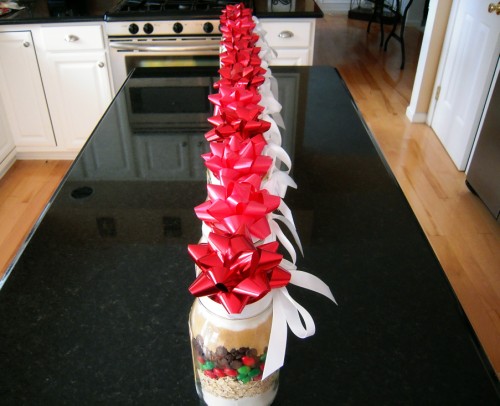 But it was all worth it, if only for this picture. It was fun to line them all up like this. It kept my anal-retentive, obsessive-compulsive tendencies occupied and out of my hair for almost an entire hour.

Heaven, I tell you! 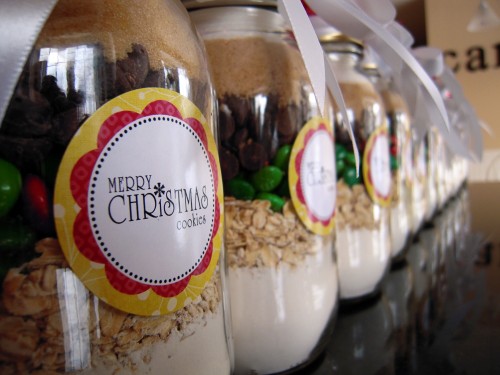 I made the labels in Photoshop. Looking back, I should have made the green more … well, green, so as to better match the M&Ms. But I didn’t and now, this glaring spectacle of poor judgment has caught the fixated attention of those same anal-retentive, obsessive-compulsive tendencies which are now busy swarming all over me like heat seeking missiles, demanding to be fed. 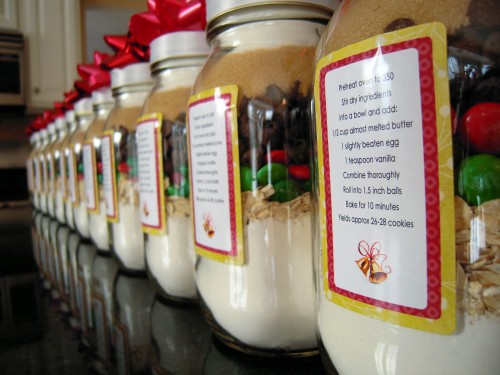 These are the back labels. Just pretend their borders are M&M green, please?

Excuse me a moment while I attempt to distract my aforementioned tendencies by organizing my linen closet via color and size and thread count.

And then maybe, if they behave themselves, we’ll even refold some towels with a straight edge.

This was a pretty fun project to do with my girls. Kind of chaotic, especially with a 9 year old and a 15 year old who are incapable of a reaching an agreement on who died and made the other Boss of the Universe. And they’re messy as all get out too.

The jars, not the kids. OK, OK, the kids too. But especially the jars. My kitchen looked like Betty Crocker exploded all over it when we were done. I’m not even going to tell you where I’m still finding sugar because you’ll just be grossed out.

For anyone interested in making these, Bakerella has the recipe and even a downloadable template for the labels. We bought the smooth canning jars at Hobby Lobby for under $2 each. I already had the blank printable labels but if you don’t have any, you can just print out your design on cardstock and simply glue it onto the jars. I, myself, try to avoid glue. We don’t get along.

I’d say, between the jars, bows, ribbon and all the ingredients, we probably spent about $65 total for all of these. We made twelve which comes out to a little over $5 per gift.

AAACK. I just did math again on this blog. That’s, like, twice in the last month! What’s up with that? I hate math! Maybe I’ve got multiple personalities?

ALL OF US, SHUT UP ALREADY.

Oh! One last thing … I’m embarrassed to admit that I have no idea how these taste. In all of our endeavors, we completely forgot to actually bake a batch for ourselves. And by “we” I mean the girls and me, not my multiple personalities. Nor my tendencies.

Anyway, I could have held off posting this until I bought more ingredients and whipped up some of these cookies so I could tell you first hand how wonderful they are but it appears time has kicked my ass once again and is hightailing it down my driveway as I type. I suppose I could chase after it but I believe that qualifies as exercise and exercise = genital warts to the tenth power.