The other day, I stumbled into my bathroom at 6:00 a.m., and bumped into Helena, my eighteen year old, who hates mornings almost as much as she hates math.

At least, I was pretty sure it was Helena but I rarely see her nowadays so I didn’t recognize her right away. This girl glowered at my entrance, scowled at my “I need to get to the sink” and shot me a death stare when I reached in front of her for my flat iron, so I suspected she was my Helena and not some disheveled, bedheaded teenager who had pilfered my jammie bottoms. She tossed her soppy, toothpaste-y toothbrush onto the vanity, threw her wet towel onto the floor atop their damp predecessors from the two days prior and stalked out of the bathroom, mumbling something about it being too fucking early to deal, and I was 99.9% sure it was Helena. When she entered her bedroom by hurdling the three-foot high, overflowing laundry basket that she had dropped in the hallway directly in front of her bedroom door three weeks ago instead of bending over, picking it up and carrying it into her room, there wasn’t a shred of doubt left in my mind that was Helena.

Here’s a fun fact: that same laundry basket has since grown roots and now serves as a luxurious, high-rise Airbnb for Ollie.

Zoe moved out years ago to live with her boyfriend, Kyle, who eventually became her fiancé and then, as of this past October, her husband, and unless Kyle insists on dressing like this in public, I don’t anticipate Zoe moving back home anytime soon. 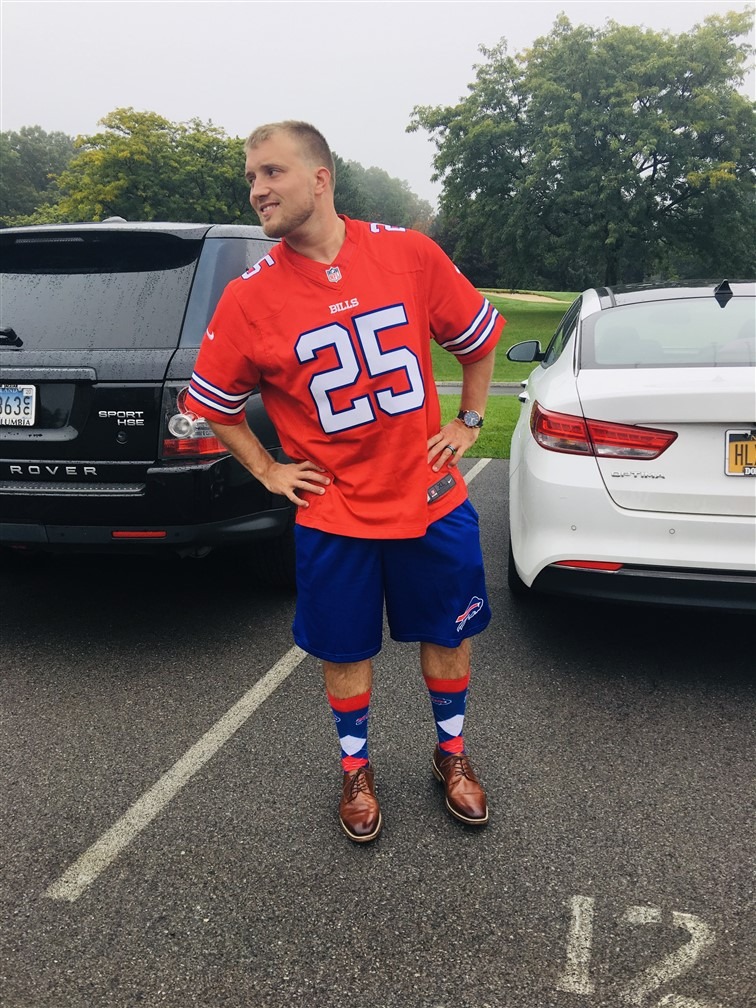 Helena doesn’t have a boyfriend, or not one that I’m aware of, but I’m just her mom so what do I know? However, it’s still only a matter of time until she moves out and I know this because I happened to casually drop a hint about her paying rent and she yelled FINE! I’M MOVING OUT! WAIT, WHERE’S YOUR SUITCASE?

And with Helena, goes Ollie and his fluffy, Tide-scented condo. Because I am too old for his shit, literally and figuratively, but mostly literally. He weighs 7 pounds and almost all of it is poop.

And then I will be alone in my house. As in, all by myself.

I have never lived on my own. NEVER. I went from my parents’ house to my college dorm, took a hard left at 19 and lived with a douchebag for awhile, then returned to my parents (I’M BACK!)  then to a college apartment with two roomies, then back to my parents’ house after graduation (I’M BACK! WHY ARE YOU CRYING?) until I got married a few months later, and then had a baby. Twice.

I have always had a roommate, be it a parental one, a college one, a spousal one, or one who can thank me for her belly button.

I am not at all sure that I can live by myself. I mean, have you met me? What if I can’t stand myself? I wouldn’t describe myself as easy-going, unless I was tipsy and even then, I’d argue with myself and wouldn’t let myself get a word in edgewise and then I’d stomp off somewhere where I couldn’t find me. For God’s sake, I fold my towels with a straight edge and use a level when spreading peanut butter and those may be the most laid-back traits I own.

With our schedules, Helena and I rarely see each other, except for the occasional early dawn rendezvous in the bathroom, when neither of us is particularly happy about it. And we tangle. Oh, do we tangle. She’s 18 and thinks she knows everything and I’m 52 and know I know everything, or at least what she doesn’t know. I love that kid with every fiber of my being, despite the fact that she drives me batty more than anyone else on this planet. No one gets my blood boiling quicker than she (except Charlie Hunnam but for entirely different reasons) and then she’ll send me an “I love you” text out of nowhere and I completely forget my plan to sell her to the same band of gypsies that my mother threatened to sell me to back in the day and my faith in humanity is restored.

We’re equal parts frustrated and enamored with each other at all times, with equal parts being a 70/30 split and I just argued with myself that 70/30 is not equal and then I countered with “but unequal parts isn’t a thing” and now I’m equal parts annoyed with myself and now I want to move out on myself.

Regardless, I know Helena’s here, even if I don’t necessarily see her here and I take comfort in that, even on those occasions when I come home in broad daylight to a house with every single goddamn light on, courtesy of someone who has no clue what an electric bill looks like.

I am looking forward to some things, like a clean bathroom vanity, no hair-clogged tub drain, sleepovers with my significant other, no poop behind the couch (Ollie’s, not Helena’s), a lower heating bill because my side door won’t be left wide open during every season, and seeing my bathroom floor sans towels and leggings and hoodies and pretty bras, the kind of bras I covet and that used to fit me once upon a never and that I could now conceivably wear as earmuffs.  And I’d be lying if I said I wasn’t looking forward to not discovering my wet laundry atop the dryer while those same leggings and hoodies and bras spin inside of it, enjoying the last remaining minutes of what used to be my permanent press cycle. And bonus! My garage can stop worrying that its entire left wall will be taken out because I will now be able to park smack dab in the middle of it instead of squeezing in next to Helena’s car.

Because Helena won’t be here. And either will her wonderfully weird, goofy, screwball sense of humor, which she lets fly almost as often as her attitude. At the moment, the thought of her leaving is much more bitter than sweet and I’m not certain all that I will gain is worth all that I will lose.

I’m well aware that Helena moving out is the natural order of things and that it is what she is supposed to do, what I raised her to do, and her sister before her. That is my job, right? It’s the job of all parents – to build a moral foundation for our kids and arm them with the knowledge, skills, confidence, spare sheets, towels and spoons they’ll need to forge their own path and do great things in this world, like establish universal health care or cure cancer or outlaw winter and its asswipe cousin, the pothole.

There will be no one here to take care of, and I have no idea how to not take care of someone. I’ve done it in one form or another since I married my first husband at 24 years old. For almost thirty years, someone’s life or comfort or happiness depended entirely, or in part, on me. The last few years alone have seen me take care of my parents as they were dying, my Aunt VeVe before Alzheimer’s stole her mind, and my brother while he recovered, regrouped and returned to Vegas.

My identity has become so enmeshed in the caring of others that I fear I’ll have none once Helena leaves. My brother is flourishing elsewhere and other than in memory, I am no longer a wife, no longer a daughter, and, for all intents and purposes, no longer a niece. Who am I if not the mom who throws out an “I love you, have a great day at work!” over my shoulder as I run down the stairs, followed almost immediately by WHY IN THE EVER LOVING FUCK ARE YOUR SNEAKERS ON THE KITCHEN COUNTER, HELENA?