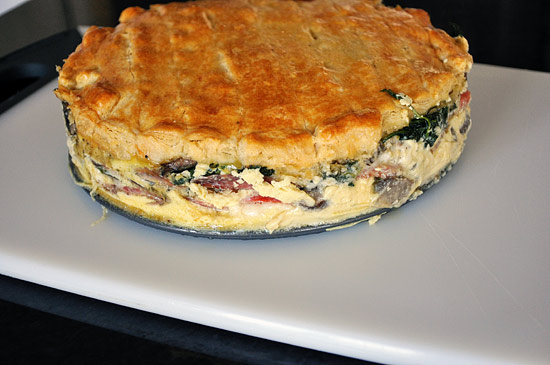 Up until last week, I had never owned a springform pan because I don’t trust bakeware that comes in a package marked “Some Assembly Required.” This isn’t Christmas and I’m not Santa or any of his elves. I once assembled a bike for Zoe and had eleven screws left over. I wouldn’t let her ride it without first blowing up all of our inflatable pool toys and duct taping them around her body, just as a safety precaution. I spent many an afternoon chasing what appeared to be a gigantic pink octopus humping a grumpy green alligator on training wheels all over the neighborhood because Zoe refused to learn how to use her breaks.

I don’t like to bake and I readily admit that I’m easily daunted by the likes of a cookie sheet so I did everyone a favor and stayed far away from the springform pan and by everyone, I mean all those good people on the eastern seaboard who don’t care to hear FOR SHIT’S SAKE, WHO INVENTED THIS STUPID GODDAMN THING followed by loud banging every minute on the minute from a small kitchen in western New York. And anytime I had a hankering for cheesecake, I’d simply throw away everything in my pantry and slash a tire or two so that when Nate came home, I could declare that we had nothing in the house for dinner and I couldn’t get to Wegmans because some batshit crazy lunatic had slashed my tires and then I wouldn’t be lying. Then we’d go to The Cheesecake Factory for a bite to eat and when I say bite, I mean we’d gorge ourselves until our arteries begged for mercy and lapsed into cholesterol-laden comas.

But then last week, a friend showed me this Taste of Home recipe for Italian Brunch Torte which calls for the use of a springform pan and it sounded so delicious that I decided right then and there to get over myself and stop being a big, whiny crybaby and buy the stupid pan already so I could make the torte for dinner because holy hell, have you priced tires lately?

If you’re not a big, whiny crybaby too,  here’s what you’re going to need:.

After you buy all the ingredients and no one takes you up on your offer to pay them a million dollars to make this dish for you, here’s what you do:

Assemble the springform pan. This took me about 45 minutes because I am mechanically, mentally and height challenged, although I’m not sure the height deficiency came into play here.

Grease the pan, if necessary. Mine was non-stick so this was unnecessary for me. Yay!

Place your pan on heavy-duty aluminum foil and wrap it around the pan. Just wrap the outside of the pan. Don’t do what I did which was to wrap the inside of the pan as well. In my defense, the directions said “securely wrap the foil around the pan” and I didn’t know what direction constituted “around” so I decided to err on the side of caution and wrap the pan in every possible direction I could think of.

Who knew I was an overachiever? I mean, besides everyone?

I’m not sure what purpose the foil serves but if it’s supposed to catch any liquid that might leak through the bottom of the pan, it doesn’t work. But only for people who are named Andy, who are mechanically, mentally and height challenged and who assemble their springform pans in such a way as to allow liquid to seep out the bottom, through the foil so that it splatters onto the bottom of their ovens, burns to a crisp, sets off their smoke alarms and makes them question their very existence.

It probably works for everybody else though. 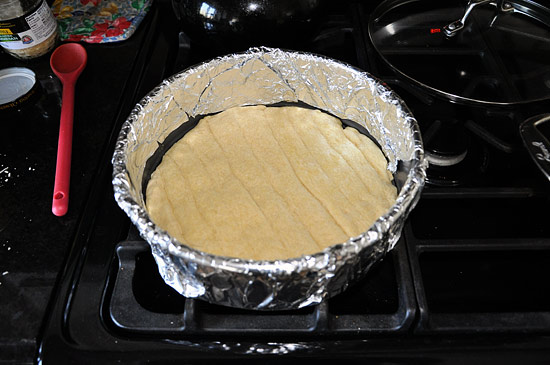 For the remainder of this post, you are under strict orders to pretend that the foil inside the pan does not exist.

IT IS A FIGMENT OF YOUR IMAGINATION.

Now, separate one tube of crescent dough into eight separate triangles, press them onto the bottom of the pan and then bake at 350° for about 10-15 minutes or until set.

You’ll probably notice that my dough is not triangular. It’s rectangular. That’s because by mistake, I bought crescent rounds instead of crescent rolls because the packages look exactly the same and sit right next to each other on the store shelf. PILLSBURY HATES ME.

Also? The rounds aren’t round at all, they’re really long rectangles, as seen above. Which is no big deal considering the rolls aren’t rolls either, they’re actually triangles. PILLSBURY HATES GEOMETRY TOO.

Way to screw with my torte, Pillsbury. And about a bazillion years of elementary math too.

Just so you know, the rounds/rectangles worked just fine and were probably easier to use than the rolls/triangles. 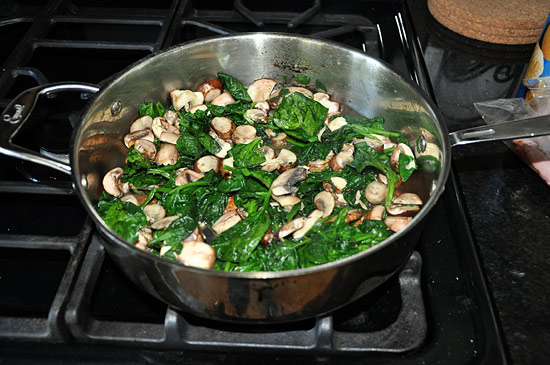 While the dough is baking, saute the spinach and mushrooms in oil in a large skillet until the spinach is wilted.

If you’re like me, you never cook spinach and therefore have no idea what it’s supposed to look like when it’s wilted.

If you’re like me, you’re too uptight to leave the skillet for even a minute to Google images of wilted spinach for fear of burning the house down.

If you’re like me, you then do the next best thing which is to picture yourself getting hot and heavy with your husband and at the exact moment he thinks you’re going to scream OH MY GOD, YES, YES, YES out of sheer ecstasy, you instead surprise him by excitedly shrieking OH MY GOD, DID YOU TAKE THE CHICKEN OUT OF THE FREEZER LIKE I ASKED?

Voila! There you have the perfect image of wilted spinach, which I’m assuming looks something like disappointed, green penis.

You’re supposed to then place the mushroom and spinach mixture between two paper towels and blot to remove the excess liquid, but I think that’s only if you use frozen spinach? I used fresh so I skipped that step since I didn’t have any excess liquid.

And wow, wouldn’t it be nice to be able to say that more often? 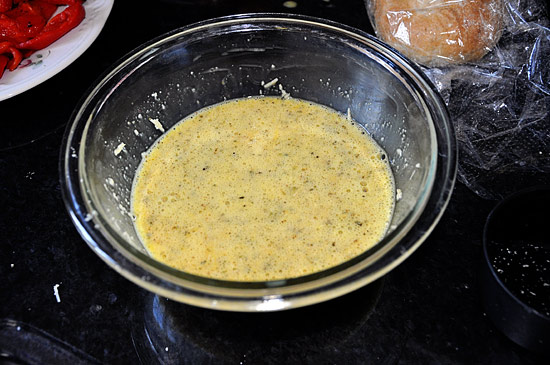 In a large bowl, whisk six of the eggs, Parmesan cheese, Italian seasoning and pepper.

Would you believe I almost cleaned my counter and wiped the sides of the bowl before taking this shot?

I blame it on accidentally snorting pepper and sneezing half my brains out of my head. 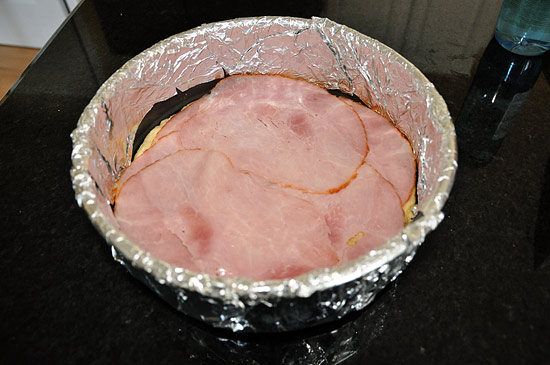 By now, your dough should be pre-cooked so you can started layering. Start with half of the ham.

And while you’re at it, STOP LOOKING AT THE FOIL.

Don’t think I don’t see you. 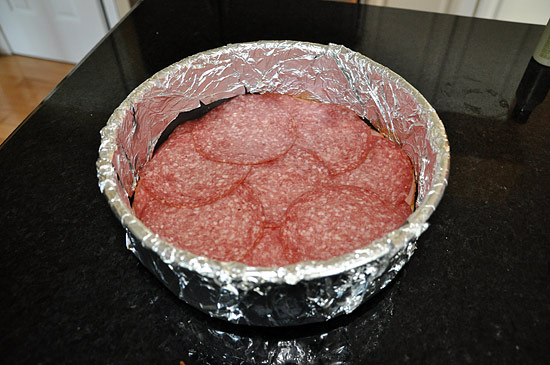 Then layer half of the salami.

Be sure to take a moment to appreciate the symmetry of the dish at this time. 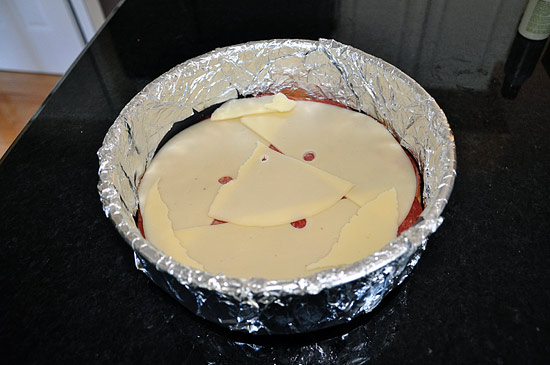 Then layer half of the provolone cheese.

Be sure to notice the instantaneous and absolute asymmetry that will occur with this layer. You might have to take a moment and sit down to fully appreciate the horror of it all. If so, it’s perfectly acceptable to ask your youngest child to slather Cortizone all over your face and stab you in the heart with an Epi Pen. 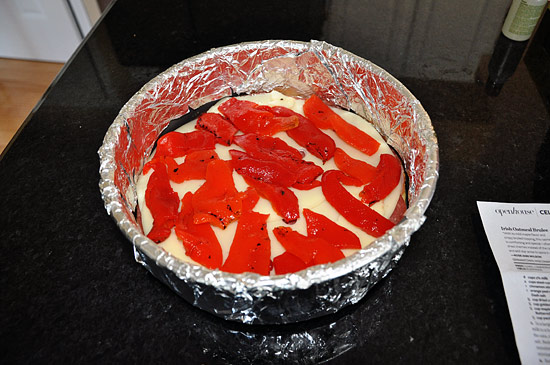 Continue layering with half of the roasted sweet red peppers.

You don’t want to know how long I spent trying to get all those little black specks off of those suckers before having a come-to-Jesus talk with my psyche.

Just in case you did want to know. 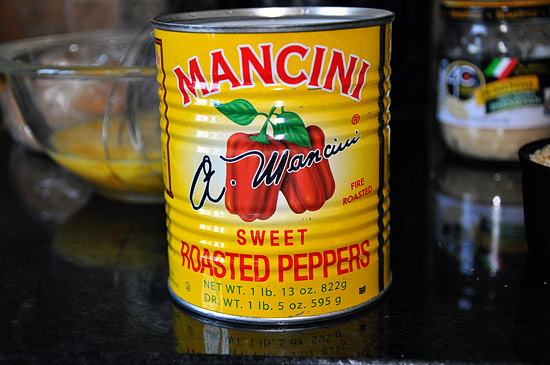 By the way, these are the roasted sweet red peppers I used. The recipe calls for 24 ounces but I only used about 3/4 of this entire can and it was more than enough.

My kids yelling EWWWWWW, GROSS! DO WE HAVE TO EAT THAT had nothing to do with my decision. 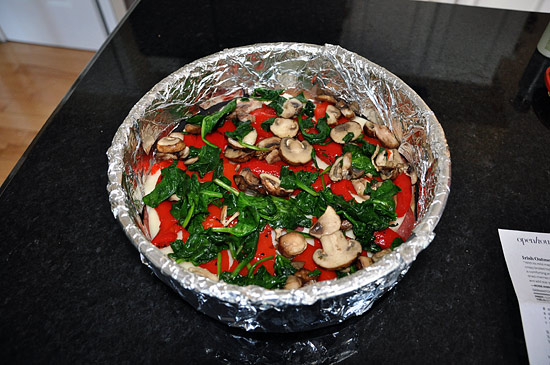 Continue with your layering. This is half of the mushroom and spinach mixture.

Is it just me or do the mushrooms look sort of like small penises?

What is it about this mixture that makes me think of genitalia?

Should I be worried? 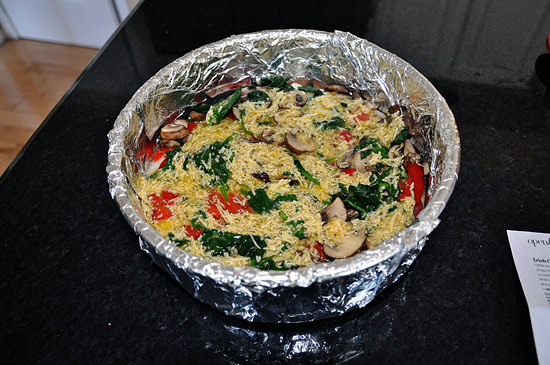 Next, layer half of the egg mixture.

Then, repeat all the layers. 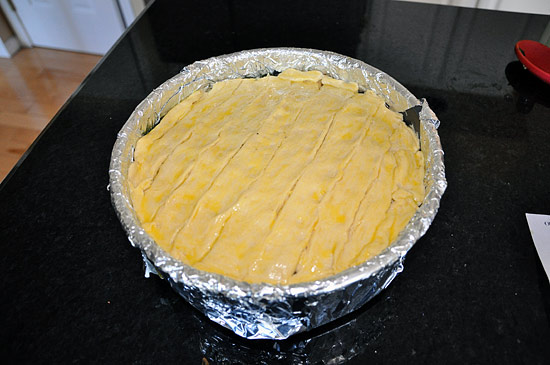 After layering, separate the second tube of crescent dough and cover the pan with it. Make sure to yell KISS MY RHOMBUS ASS, PILLSBURY while you do so, just on principle alone. Plus, it’s a great stress reliever.

Whisk the remaining egg and brush it over the dough.

Bake it at 350° for about 60 to 75 minutes. I had to cover it loosely with a sheet of foil after about fifteen minutes to prevent burning. You’re supposed to bake it until it reaches 160° but if you can find a thermometer in my kitchen island drawer without stabbing yourself underneath your fingernails with a cooking utensil, go for it! I, for one, am allergic to tetanus so I just baked it for about 70 minutes until it was golden brown,which was right around the time I almost asphyxiated on the smoke from the drippings.

Here it is, right out of the oven. 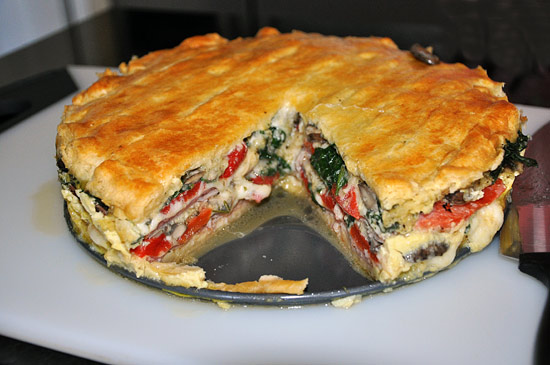 I let it sit for twenty minutes before cutting into it but as you can see, there was still some liquid on the bottom. This was quite surprising, considering the bottom of my oven looked like a forest fire had pooped all over it.

That was me, bitch slapping the springform pan. 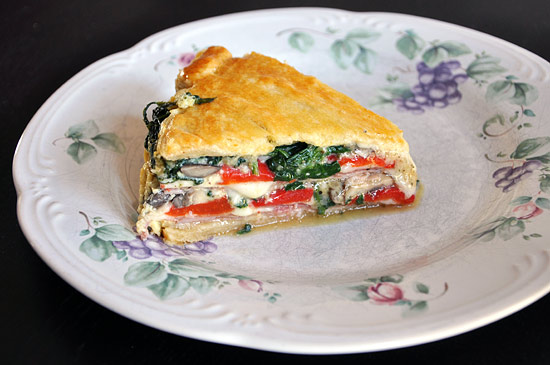 It was delicious, albeit a little salty, maybe from the ham? Salami? Cheese? Profuse sweat and anxiety?

Here’s the full recipe from tasteofhome.com. I hope you enjoy it!.