We’re one week into the school year and if you asked me what I like best so far about the fourth grade, I’d have to say the clothes. I was over the flared jeans 2.4 seconds after they came back with a vengeance a few years ago and my email campaign protesting their revival, directed to those in charge of all things vogue and sent to Chief.Asshat.In.Charge@CanFashionPossiblySuckAnymore.com began in earnest the day my then ten year old Zoe declared that jeans with a three feet wide flare under which she could conceivably hide a Buick were not bell-bottomy enough.

This year, skinny jeans are “in” and I’m so stinkin’ excited because both my girls, the fourth grader and the tenth grader, are wearing them which means I can now drag my old jeans out from the eighties and, provided I perform a little liposuction with a turkey baster and our Bissell steam cleaner beforehand, potentially squeeze my left thigh into them and then hang with my daughters while appearing hip and trendy and not at all like the homeless bag lady they’ve become accustomed to seeing at the dinner table.

Not the acid washed, two toned ones. I don’t want to scare anyone.

I’m talking about my eighties jeans, not my left thigh. Or my right, for that matter.  My thighs are not acid washed or two toned, despite whatever shenanigans my veins may be up to behind my back. Or legs, as the case may be.

Helena, my fourth grader, also has several long waisted tops which I absolutely adore and for which I’m willing to pay a million dollars in the form of an IOU written in blue glitter glue to the first designer who comes up with something comparable for a 42 year old premenopausal mom of two who has been known to gouge the eyes out of those poor unfortunate souls in Wegmans who unwittingly catch a glimpse of her belly button as she reaches for a twelve pack of Bounty.

If you ask Helena what she likes best about being in fourth grade, without hesitation, she’ll shriek DEODORANT at the top of her lungs and stick her armpit in your face in case you need a visual aid.

Because apparently, part of hitting the big time for fourth graders is the responsibility of a gym locker into which they throw a pair of shorts, a t-shirt, a sweatshirt and sweatpants, together with the aforementioned Holy Grail.

Helena jumped off the bus last week and came running into the house, waving a yellow note while yelling excitedly OH MY GOSH, I NEED DEODORANT. OH MY GOSH. OH MY GOSH and I was all “Oh honey, you don’t even smell yet” and she was all I WILL SMEAR DOG POOP ALL OVER MY BODY IF THAT’S WHAT IT TAKES.

So I read the yellow note with dread because even though we live a mile away from the gym locker in question, I could already smell the sweaty stench of a t-shirt and shorts after they’ve been stowed away in a dingy, metal locker for upwards of three months, having never reaped the benefits of a wash, spin or rinse cycle and let me tell you, it smelled like EU DE TOILET in my head which means it will smell like EU DE BUSTED SEWER LINE in real life.

Helena simply cannot wait to grow up and be like her big sister and I know that rubbing deodorant under her arms is just another cog in the wheel of imminent adolescence but I’d be lying if I said that I didn’t stand in that kitchen and, ever so briefly, considered making a deal with God whereby I would stop nagging him for a mid-life crisis already if He, in turn would agree to go all Benjamin Button on Helena so that I could shove her back into my womb and pretend the last five minutes had not happened.

So off to Target we went and we walked into the deodorant aisle a/k/a NIRVANA and Helena stopped dead in her tracks in sheer awe and I’m not exaggerating when I say that the gates of Heaven opened and rained down an M&Ms and Skittles combo upon Helena and then a big, golden unicorn wearing a rainbow copped a squat on her head. It was just that awesome. 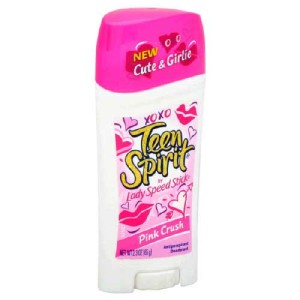 Speaking of Nirvana and teen spirit, can I take a moment to tell you how pleased I was to discover that my fifteen year old has Smells Like Teen Spirit on her iPod? Not that I was a big fan of Kurt Cobain or the whole grunge movement of the nineties because I wasn’t. Long, greasy hair still makes me throw up a little in my mouth. But I did like that song and now I know that Zoe likes it too, which means we have something in common, which means I’ve got another weapon in my arsenal for those occasions when she wants to date an older, tattooed, pierced felon to prove she’s nothing like me. Little does she know of my dating history. However, I’m saving the BEEN THERE, DONE THAT weapon for something more egregious, like when she comes home drunk for the first time and pukes on her father’s shoes.

As a side note, I’m aware that Lady Speed Stick invented Teen Spirit long before Kurt did but nevertheless, I’d like to put it out there that I wouldn’t mind whatsoever if you guys wanted to name something in my honor. I’m totally for pimping myself out for maximum exposure and just for the record, I don’t care what it is, a deodorant or a tampon or even an erectile dysfunction pill. How about Andy’s Handy Randy Candy?

And by the way, don’t even think about naming Andy’s Handy Randy Candy after your cousin Andrew. I’ve got the U.S. Patent and Trademark Office on speed dial.

We got back home and Helena threw the deodorant at me and immediately whipped off her shirt, scrunched up her face, raised her arms to the sky and shouted OK! I’M READY!

And I stood there with the stick in my hand and looked at my tiny nine year old, standing there in her little white undershirt with underarms smoother than a baby’s bottom, so excited and impatient to cross this next milestone into adolescence and I had to choke back some tears, right before I hollered NO WAY. YOU CAN’T MAKE ME and made a break for it.

And then she chased me all over the house until she cornered me in the bathroom and stuck her armpit in my face, at which point I relented and reluctantly became a grown up.

It took several attempts to show her how to apply the deodorant because she could not maneuver it adequately within the cramped confines of her little armpit, leaving me to wonder how it is that, with little effort, she can make that tiny, seemingly innocuous thing emit a fart sound loud enough to wake the dead.

We managed to smear a light coating on each armpit and Helena spent the remainder of the day walking around the house and sniffing her underarms every ten minutes to confirm it was working.

And when I asked her what she smelled like, she thought for a moment before she declared “Smells Like Teen Spirit, Mom.”