The problem with having a creative burst is that it’s just, well, that … a burst. A brief respite from the daily grind, coupled with momentary surges of inspiration and imagination that build up into something monumental in your brain but, for whatever reason, are not translated into reality. They’re temporary and fleeting, lasting only until such time as the entire process *bursts* and then deflates because it’s no longer fun and has become something approximating work with a capital UGH.

Then you either wind up with painted but unadorned walls for months or a husband who complains ARE WE EVER GOING TO HAVE SEX AGAIN, depending on what your creative burst was all about in the first place.

A couple of months ago, I had a creative burst for Helena’s recently painted bedroom and by recently, I mean sometime back in January. The term “recently” is relative, just like the phrase “in a minute, honey” which really means “whenever the hell I get around to it, I don’t care what the big hand and little hand say.”

This past week I finally managed to bring my creative vision into fruition:

This is now the only wall decor hanging in Helena’s bedroom but it’s huge and made up of six separate pieces so really, it’s like having a whole bunch of art stuffed in the room, albeit in one spot. And bonus! If you stare at it long enough, you don’t even notice the floor, desk and bookcase decor which is best described as Dirty Laundry Art Deco.

This is what you’ll need to use if you ever find yourself suffering from a similar creative burst: 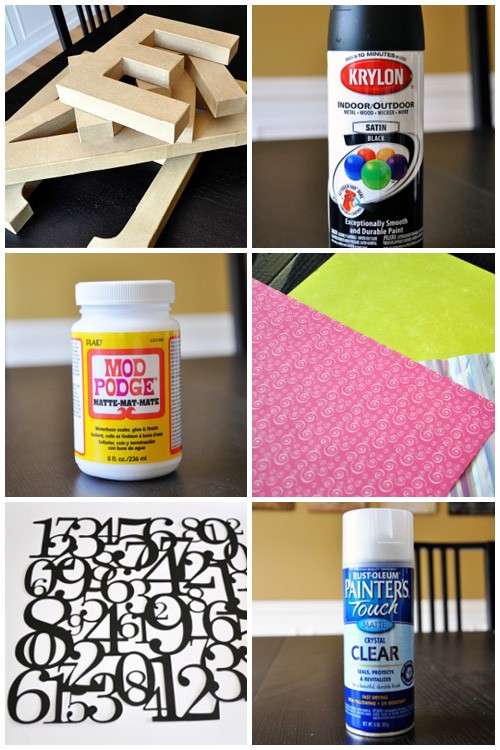 And this is what you will do with all this stuff: 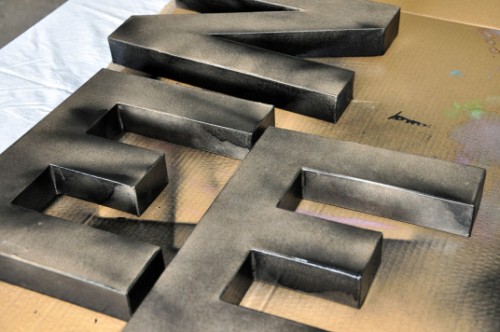 First, spray the front and sides of all the letters with black spray paint. It took three coats to get the kind of coverage I wanted. Make sure you do this outside in a well ventilated area and only after you’ve gone grocery shopping. Why? Because when you almost asphyxiate yourself on the fumes, the only response you’re going to get when you stumble into your kitchen and choke out a barely discernible “I can’t breathe” is most likely going to be “Chicken again for dinner? Can’t you make lasagna? Mom? Why are you sleeping on the floor? Can I go to Katie’s tonight instead? Mom?” 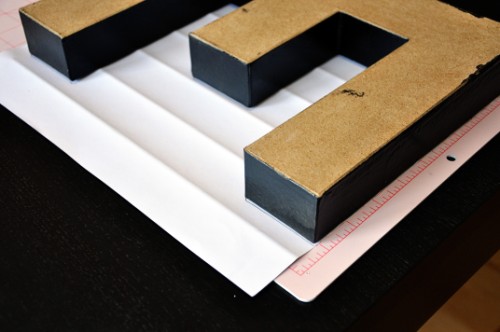 Trace around the letter and then cut out your pattern using sharp scissors, but only after screaming at the top of your lungs FOR CHRIST’S SAKE, WHERE THE HELL ARE MY SCISSORS? CAN I JUST HAVE ONE THING IN THIS HOUSE TO CALL MY OWN? BESIDES THE WASHER AND DRYER?

Then Mod Podge the paper onto the letter. Of course, I don’t have a photo of that step because no way was I going to have my brand new Nikon D90 anywhere near Mod Podge. Let’s review, shall we? Did I ever tell you the story about how I once Mod Podged my boobs together? Exactly.

When it comes to Mod Podge, you need a light hand and you need to work quickly. Using a sponge brush, lightly cover the back of the paper as well as the front of the letter you are adhering it to. Do not slop the stuff all over the place. Mod Podge has a tendency to migrate to places unknown. Remember … UNIBOOB. Quickly position the paper on top of the letter and press down and out to smooth out any wrinkles or bubbles. I use a credit card for this. Just make sure it’s a canceled one lest your husband grabs it, hops on line and buys up the earth on eBay, hollering defensively WELL, THEN? WHY’D YOU GLUE THE MASTERCARD TO MY HAND?

Then, using a light hand, apply two or three thin coats of Mod Podge on top of the letters, allowing the coats to dry in between. This will give the letters a nice matte finish. Remember … a light hand. UNIBOOB TO THE TENTH POWER. 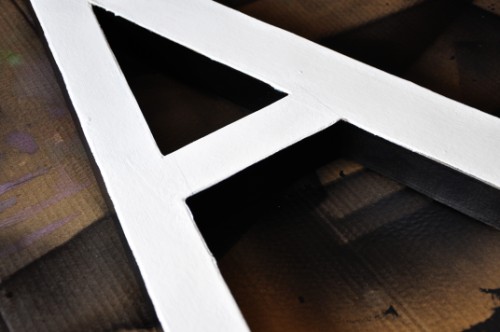 For the “A” I painted the front of it white and then, using the same steps as above, simply Mod Podged sections of the numbered overlay to fit on its surface. I say “simply” because it sounds a lot better than saying “Son of a bitch. Shit. Dammit. Shit on a stick, why won’t this work? It’s too long here. It’s too short there. Why can’t I get the “6” where I want it? Hey! Who the hell took the 8? YOU ARE DEAD TO ME.”

When you are all done Mod Podging and have determined that no part of your anatomy is glued any other part of your anatomy, go ahead and seal your letters. All this means is that you spray them with at least two light coats of the sealer in a well ventilated area. As with the spray paint, it’s a good idea to make sure your pantry is stocked beforehand.

And there you have it! 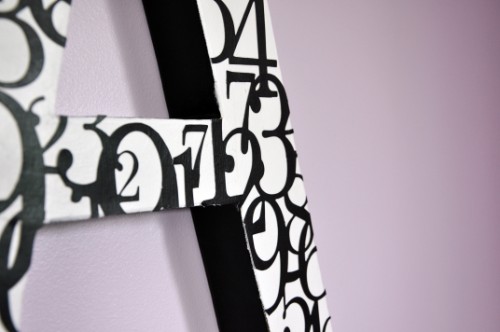 See? You can’t even tell where I went all Smoky Robinson on it and stained it with the tracks of my tears, can you? It’s a miracle! 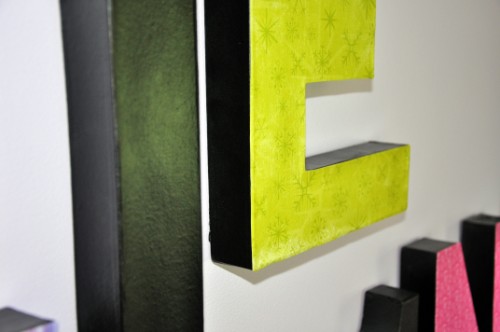 I kept the “L” just plain black because I felt the whole piece needed a bit of simplicity in the middle to “ground” it.

Actually, I just didn’t feel like being crafty anymore. But that doesn’t make me sound as smart. 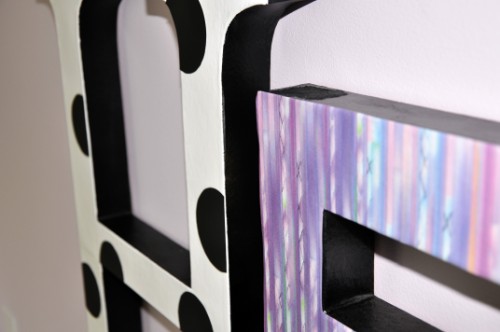 The “H” was done exactly the same way as the “A” except I used circles cut out of black cardstock and a whole lot less profanity.

Oh, and you can see that the top of the “E” bears the scar from where I ripped the price tag off of it before I painted it. I am rather proud of myself for conquering my OCD and anal-retentive tendencies by not spending 4.5 hours sanding the utter crap out of it. Go me! 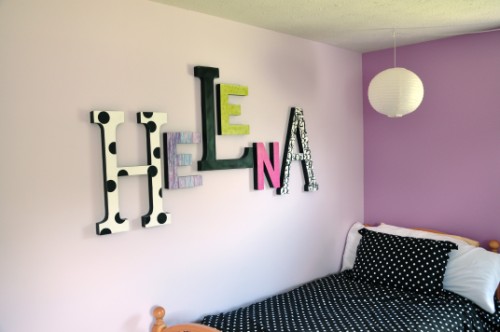 Yes, this photo sucks because I still don’t know what settings to use on my Nikon D90 when I’m shooting indoors in this kind of light but you get the idea, right?

Now, I’m just waiting for a few more bursts of creativity to hit me so that Helena can get some decorative throw pillows for her bed, stuff for her three remaining naked walls and some cornice boards for her windows. And then, because I’m pretty much over my quota of crafty cussing for the year, we need a big honkin’ burst to hit Nate square in the head so that he can build her a new black bed.

But first we have to catch him and get him to hold still to make him a better target so if anyone wants to help me chase Nate around the yard for a few months, Helena and her room would greatly appreciate it.

29 thoughts on “Mod Podge isn’t just for gluing mammary glands together, you know”