When we went to IKEA in February, we bought a dining room table and eight chairs. After a combined total of two husbands, seventeen years of marriage and numerous dining rooms which held nothing but echoes, I was so damn happy to finally have a dining room set that I didn’t care the one we just bought came with white seat cushions.

That lasted until we got it home and assembled it, whereupon I banned all red sauce from our house because WHO’S THE NUMNUTS THAT INVENTED WHITE SEAT CUSHIONS? HAVE THEY NOT SEEN ME EAT SPAGHETTI?

I ran out to Jo-Anns when they were having a big sale and spent hours picking out the perfect fabric. After waiting in the cutting line for twenty minutes, I heaved my chosen bolt of fabric on top of the counter, earning a fourth herniated disc in the process, only to be informed (1) the fabric was not included in their sale; (2) it sold for $38 a yard; (3) I would need at least three yards of it; and (4) no, they had no idea that the universe hated me.

I wound up using a 50% coupon and paid $19 a yard so it wasn’t as excruciating as, say, getting a bikini wax without adhering to the whole trim as a prelim thing because that little tidbit of advice never came up on a Google search of “what to expect when you have a complete stranger pour hot wax on your nether regions and rip the hair off your hoo-ha.”

Now, for the chairs, you’re going to need a staple gun, scissors and the ability to make up new and unique curse words on the fly. 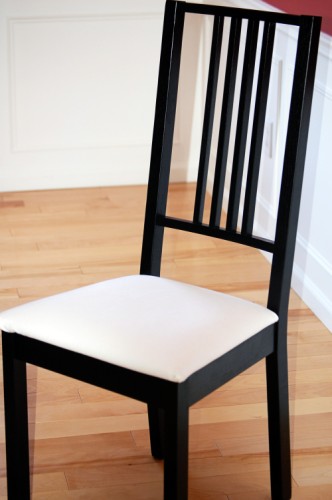 This is what I started out with. I normally adore a black and white combo but again, I ask you … who in their right mind wants a white seat cushion on a dining room chair? For that matter, who in their left mind wants one?

For those of use who have completely lost our minds, don’t feel obligated to answer. 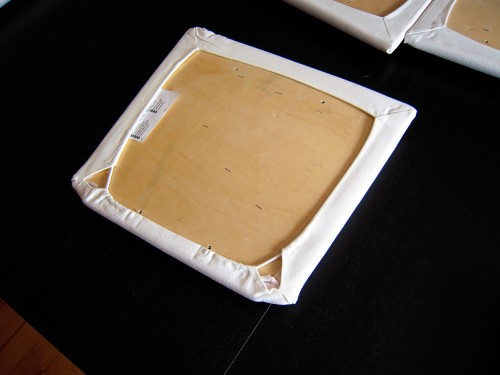 When I took the seat cushion off the chair, this is what it looked like. And when I say “I” I totally mean Nate who was absolutely thrilled to disassemble the same furniture he had just spent four hours assembling.

He loves me to death. He forgets that sometimes and I have to remind him but that’s OK. That’s what wives are for, right? 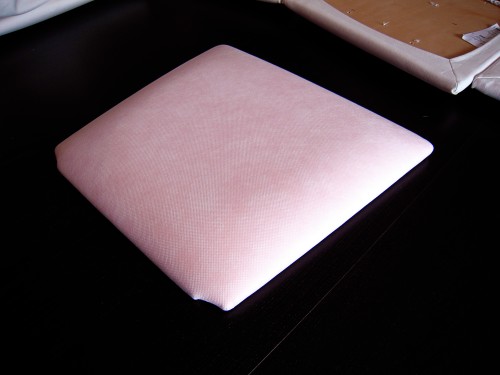 The white cover turned out to be a slip-cover which was easily removed (and revealed pink padding underneath) and I took this to mean that IKEA knows perfectly well no one wants to eat spaghetti bolognese on a white seat cushion without having the option to throw the cushion in the washing machine or the garbage, depending on the spray pattern and whether your mouth happened to be shoved full when you sneezed twelve times in a row. 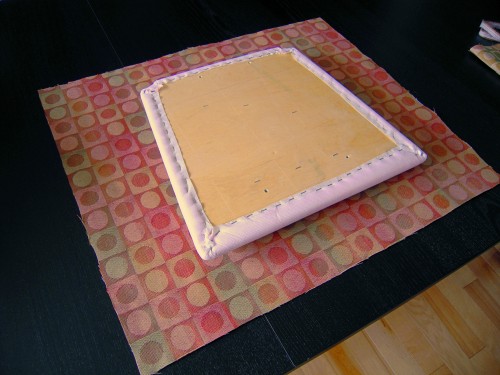 I’m allergic to risks so I’ll just sit here and twitch and rub Benadryl all over my body.

Whatever you decide to do, after you do it, put the cut fabric right side down on your surface. Then place the cushion upside down, centered on top of the fabric. 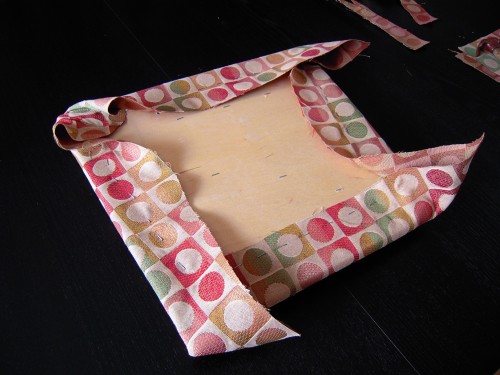 Now this is where it starts to get interesting, just in case you’re dozing off over there because you’re bored to death.

Pull the fabric tight over one side of the cushion and staple it once in the middle of that side. BAM.

Then place two staples immediately to the left and to the right of that first staple, pulling the fabric tightly each time. BAM BAM. BAM BAM.

Once you do this on one side, repeat the process on the opposite side, making sure to pull the fabric tight before each staple to prevent buckling. Then keep alternating between the two opposing sides, pulling and stapling until you get about 1½ – 2 inches from the corners. Repeat with the other opposing sides.

BAM to the tenth power.

Some tutorials suggested this process was easier with two people. I found that adding another person into the mix while using a staple gun was cumbersome and simply doubled the amount of fingers that could be used as target practice. Besides, it didn’t take long before Zoe realized how much it would suck to text without her left thumb and bailed on me. 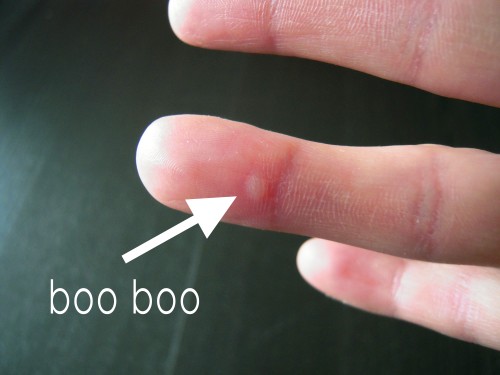 My first of many owies.

Yes, my skin is dry. No, I was not descended from elephants.

Did you just call my mom an elephant? 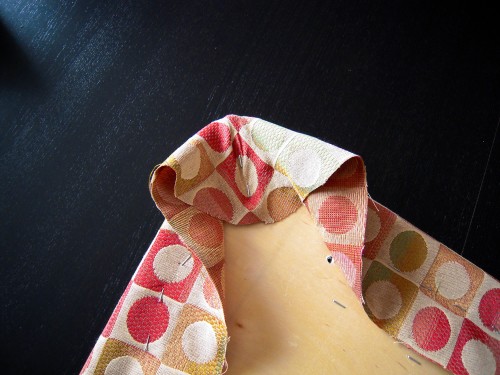 The dreaded corners. Although, honestly? I actually liked doing them best of all and ultimately found them to be the easiest part! Then again, I’m also compelled to run over a pothole with my left tire if I just ran one over with my right because I think they cancel each other out and won’t affect my car’s suspension so, there you go.

You’ll probably have to trim your material a bit, just so you don’t have so much excess fabric to staple down. Then, just tightly pull the corner of the fabric down and give it a good stapling. I only needed two staples here but I had others where I used a good four or five. It all depends on how much fabric you’re working with and how you choose to vent your anger after your husband decides to help out by offering “constructive” criticism from the living room sofa. 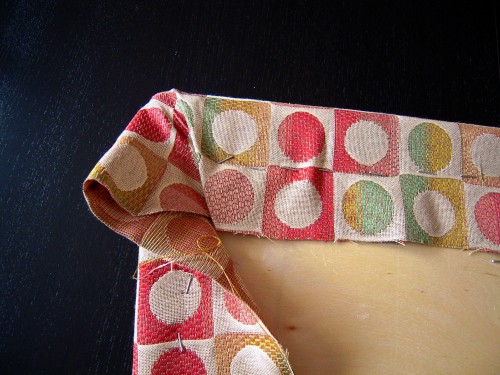 Then, fold down one side of the corner. You might have to fiddle with the material, tucking it in a bit here or there so as to achieve a smooth fold with no buckling. Staple staple staple. 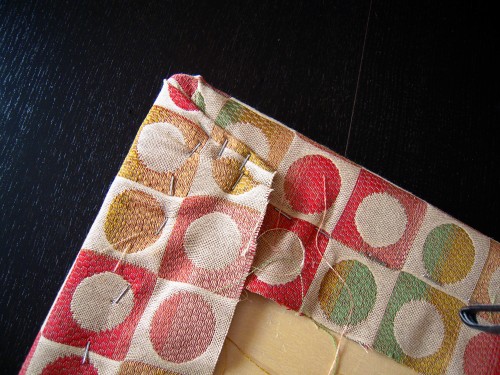 Then fold the other corner, fiddling with the material as you need. Staple staple staple.

Do this for all four corners, or however many corners you have. Although personally, I would not suggest purchasing octagonal chairs EVER. Unless you like having blisters for hands. 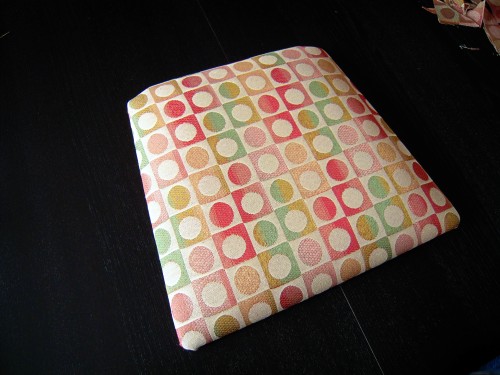 This is what it will look like when it’s all done. 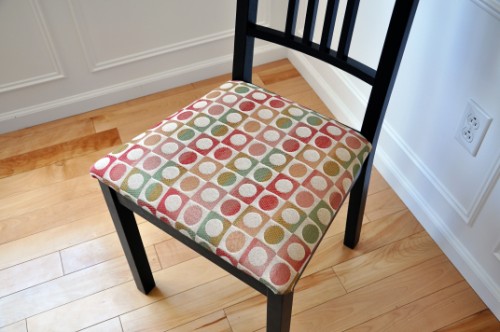 And this is what it will look like after you yell to your husband YOU KNOW, IF YOU REALLY WANT TO BE HELPFUL, STOP TALKING AND START SCREWING. But only after you explain to him in no uncertain terms that by screwing, you mean with the drill in the garage, not the one hanging below his belt buckle. 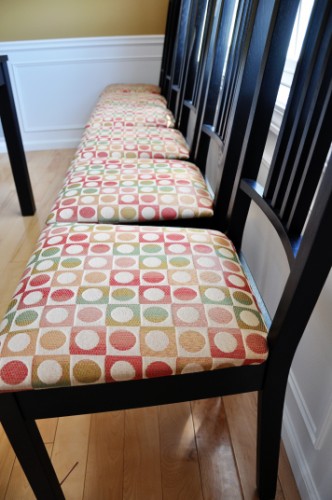 Not including the time it took for my blisters to heal, it took me about two whole days total to do eight chairs. 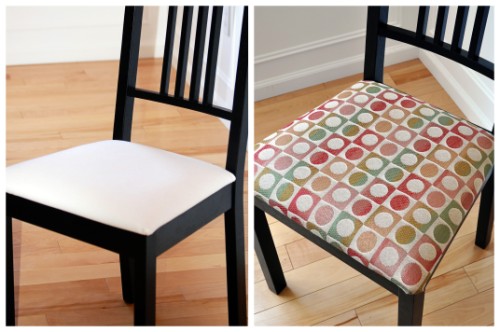 After tackling this project, I am no longer afraid of a staple gun.