The Art of Name

In my previous life as a custom designer, I worked on a slew of projects involving clients’ cherished photos and when I’d reveal the finished pieces, very often the clients would become very emotional and weepy and I mean that in an Oh my goodness, it’s beautiful, I love it, I think I shall cry sort of way, and not in a HOLY SHIT, WHAT THE HELL DID YOU DO TO MY FACE, ARE YOU ON CRACK? kind of way.

That scenario never happened, thank God. If it had, I’d have become very emotional and weepy in a YOU’RE RIGHT, I AM TOTAL SCUM, I HAVE NO BUSINESS BREATHING AIR kind of way.

I enjoyed making people cry back then. I still make people cry today but now it’s limited to those who were yanked from my womb and it’s for entirely different reasons and honestly, it’s not half as much fun.

I also enjoyed making clients smile and the one product that was almost guaranteed to make my clients flash a wide grin was my Name Art. 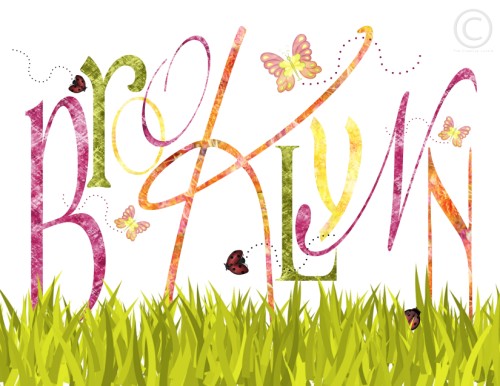 I designed these pieces using creative typography and various graphics that I either made or purchased from a variety of sources.

I had always been obsessed with typography and at the time, I collected fonts like other people collected purses or coins or children or ex-spouses or STDs.

PSA for the day: stay away from that last group. They’re icky.

It took several weeks but I was able to restore most of my fonts, thanks to Carbonite.

Can’t say the same for my mind.

If Carbonite ever gets into the business of restoring sanity, they will make a fortune. Maybe they’ll restore mine, on the house? I mean, I did come up with the whole idea in the first place. 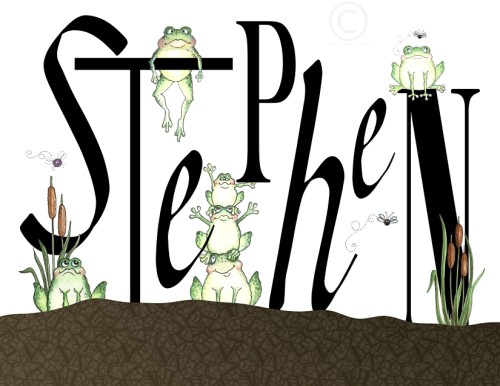 I designed Name Art for both boys and girls and while I originally thought that frogs would be more of a boyish theme, I soon discovered they were pretty popular with the girls.

Who’d have thunk it?

By the way, Nate is closing our pool today and just five minutes ago, skimmed out a massively obese frog from the deep end. I helped by jumping up and down, shrieking GET IT, GET IT, GET IT, AAAAACK and flailing my arms all about because I like to do my part, whenever possible. We make a good team, Nate and me. 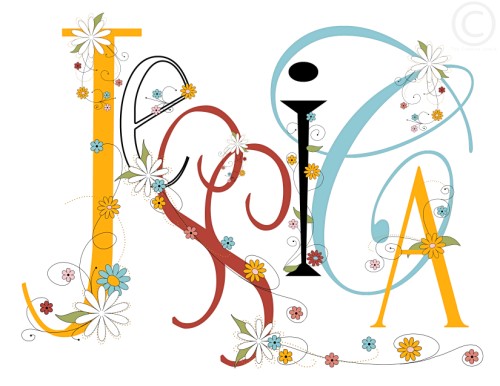 Sometimes a client would order a name in one theme … 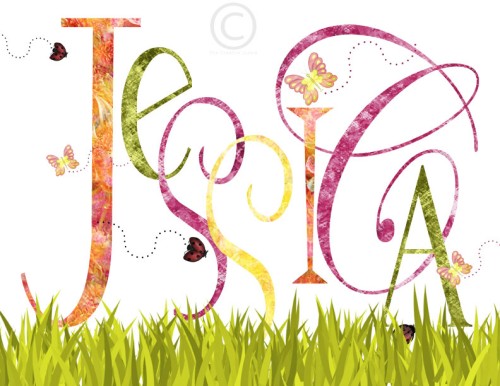 And then change her mind somewhere along the way …

But I was fine with that because I totally understand that it’s a woman’s prerogative to change her mind and this applies not only to Name Art, but also to hair color, holidays with in-laws, impromptu sex before the kids come home and new paint for the laundry room, regardless of whether the room was just painted yesterday by her husband in a color of her own choosing, which color looked awesome on the paint swatch but when rolled onto the wall, made the entire room glow as if Chernobyl threw up all over it.

Being a woman has its advantages! Approximately 23 days out of the month.

I didn’t mind switching a Name Art theme for a client because I liked creating them. They made me happy.

I became a little disenchanted with all the unsexy, endless, tedious, dreary, behind-the-scenes crap of my business and for a short time there, I turned into a bitter, deranged hag.

It’s but a distant memory now, though. Except for the flashbacks. 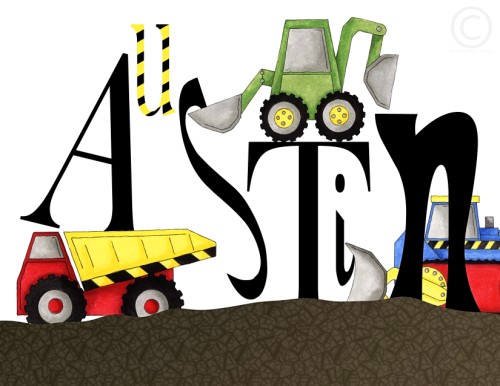 I just wanted to create stuff.

Why couldn’t I just create stuff?

Because they can’t buy it if they don’t know about it. Because the “If you build it, they will come” mentality exists only in movies starring Kevin Costner and I didn’t live in the middle of a cornfield.

But did I think about any of that as I stood in line at the county clerk’s office to file my shiny new DBA paperwork oh so many many moons ago?

No. I was too busy thinking about Photoshop.

They’ve been my downfall more times than I can count.

I can count pretty damn high, too. 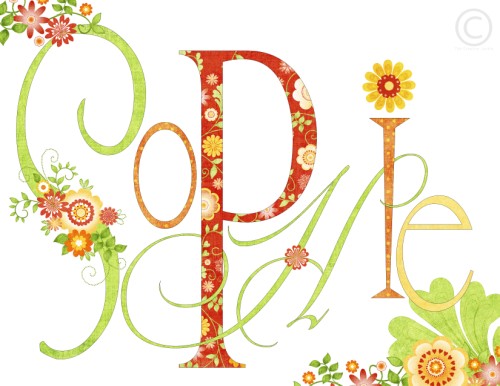 This was my favorite theme. 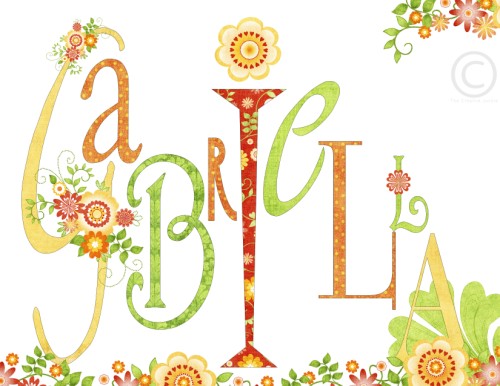 Aren’t you all thankful I worked from home? 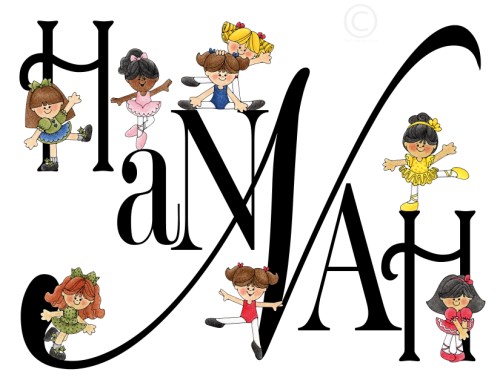 I had quite a few clients whose little girls took dance classes.

My youngest, Helena, took dance when she was three. On the day of the recital, I spent two hours trying to get a bow to stay in her hair and finally resorted to a combination of zip ties and cement. The recital itself lasted five hours, two minutes of which were allotted to Helena’s group and that was just long enough for the girls to shuffle onto the stage, giggle, completely forget their routine, pull the bows out of their hair, attempt a few pirouettes and a final curtsy, all while waving furiously at their parents. 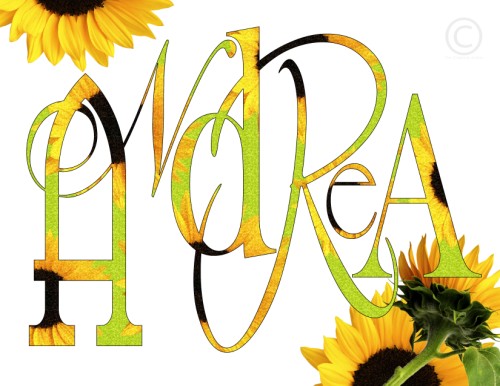 Can anyone look at a sunflower and not feel happy?

Is that even possible?

If it is, I don’t want to know about it. The world is a much nicer place that way. 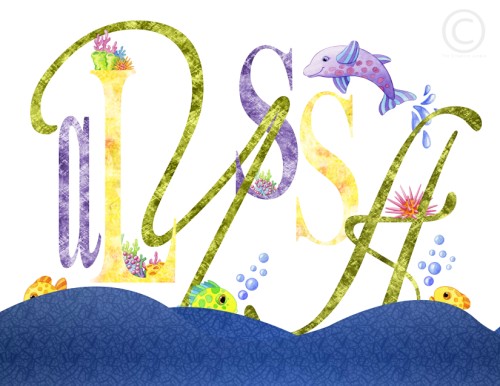 As with the frogs, I thought the ocean theme would be more boyish.

It’s astonishing how often I’m wrong in life and this is why I do not live in Vegas.

That, and the heat. Humidity notwithstanding, 110° is freaking hot, people. Can we all agree on this?

If I had a dollar for every time I was wrong, I’d be typing this from my own private Hawaiian island while Dirk, my ocean boy, fetches me some lemonade. 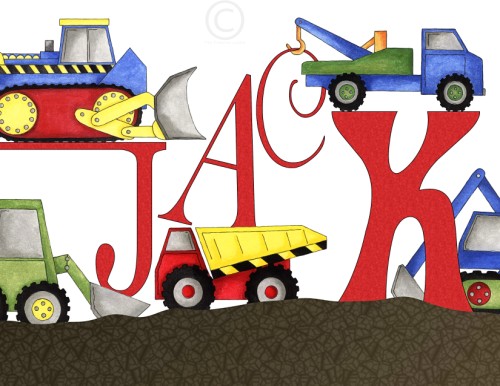 I wasn’t wrong about the construction theme, though.

I never did create one for a girl. 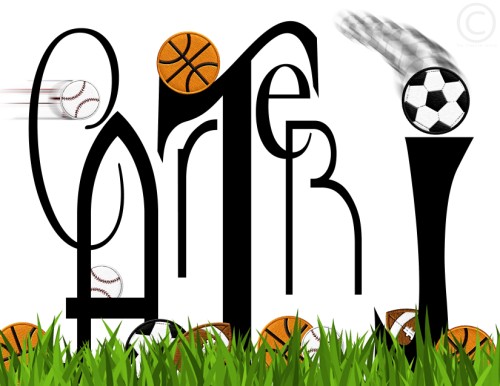 Same with the sports theme. Where were all the feminist clients, I want to know?

This particular client wanted her son’s middle initial “J” included. I say this because I can just see you peering at your monitor, slowly mouthing the name and wondering where in the world I learned how to spell.

All I can say in my defense is that I simply want what I want, the way I want it.

Oh, and I was abandoned in the NICU by my parents for several days after I was born, under the pretense that I had to gain weight. Apparently, my twin brother hogged all the good stuff while in utero.

It’s amazing I function at all, really. 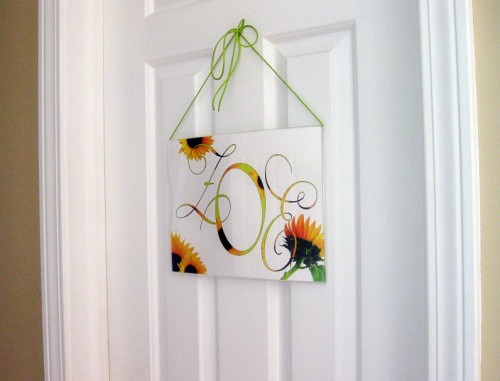 How in the world this substandard ribbon passed my inspection is inexplicable, although I’d like to think it’s because I’m an enigma.

But more likely than not, since this piece was for Zoe’s bedroom door, I just wanted to slap it up there speedy quick by whatever means necessary so that the door would look pretty. Maybe then, no one would suspect that a real, live toxic waste dump lay on the other side of it.

Every now and then, I get that creative itch and toy with the idea of offering Name Art once more.