This year’s cookie mix jars – who knew OCD tendencies could taste so good?

Last week I posted that I woke up crafty one morning and made some personalized hand sanitizer bottles for teacher gifts.

I woke up crafty quite a few mornings this month because I also made thirteen cookie mix jars.

As a side note, I think my husband secretly likes it when I wake up crafty because that means I’m actually excited about something and it’s morning and I’m in bed. Half the work is already done for him.

Cookie mix jars are probably not the best gift to make if you are prone to OCD tendencies because truth be told, the whole process is messy and lopsided.

Which is weird, don’t you think? I mean, you would think that someone who likes to fold her towels with a straight edge and who, after running over a pothole with her left tire, will immediately run over another with her right to establish equilibrium, wouldn’t be messy or lopsided, right? But I drive around in an eleven year old Honda with nine month old bird poo on the window and my left boob is bigger than my right.

God has a weird sense of humor sometimes.

Or I’m just an enigma! 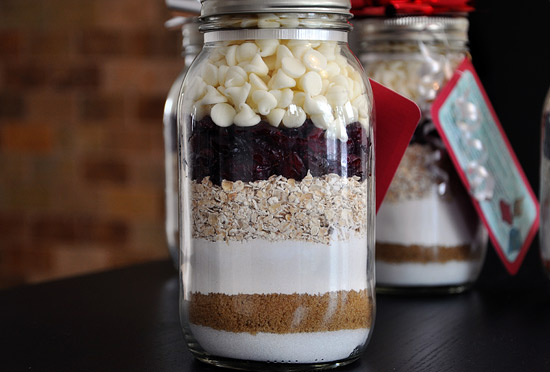 I tried out a couple different recipes and just so you know, it was all in the name of science and had nothing to do with it being the week before my period. I wound up using a recipe from the Launder, Fold, Repeat blog because biting into the twelfth first cookie was pretty much like Christmas in my mouth.

As Zoe and I layered the ingredients, we quickly discovered two things: (1) A rolled up piece of paper in the mouth of the jar worked just as well, if not better, than our plastic funnel because it was more flexible and it wasn’t covered in dog saliva and hidden under the couch with Oliver and his stash of seventeen left gloves and three pair of dirty underwear; and (2)  it was a lot easier to line up the ingredients in assembly line fashion and have one person constantly ask “You added the sugar? Are you sure? How about the baking powder? You didn’t just add the baking soda twice? Because they look exactly the same. You know that, right? So, you’re absolutely sure it was baking powder? SWEAR TO GOD ON THE LIVES OF MY FUTURE GRANDCHILDREN” and have the other respond “Please tell me I’m adopted.” 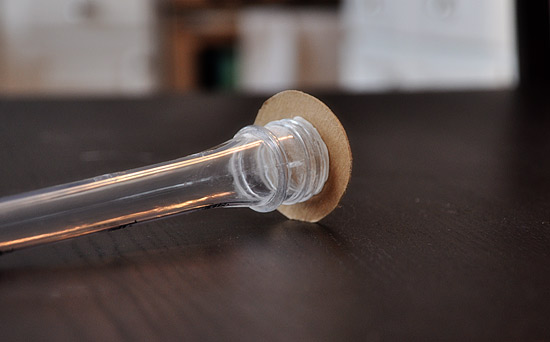 At one point, I had to take a turkey baster, a piece of cardboard and my glue gun and unleash my inner McGyver all over them to construct a device that we could use to pack down each layer to ensure everything would fit snugly into the jar.

I never felt so resourceful in all my life! And that’s coming from someone who once defrosted a chuck roast with nothing but her armpit, a butane lighter and sheer will.

This is where cookie mix jars and OCD tendencies do not mesh.

Because apparently, the Internet could not care less about middle-aged, uptight, premenopausal, lopsided women who make Christmas gifts while wearing aqua yoga pants from the eighties cinched at the waist with safety pins. Nowhere online could I find miniature levels that could be inserted into canning jars to ensure that all layers of ingredients were at precisely 180 degrees and parallel to one another.

My jeans were dirty. Stop being judgy.

WARNING: The following previews have been rated TWITCHY! MY EYE IS TWITCHY! and should not be viewed by people who octuple check the alarm on their clocks, organize their cheese according to color and height, or who are prone to anaphylaxis and do not have epi pens readily available. 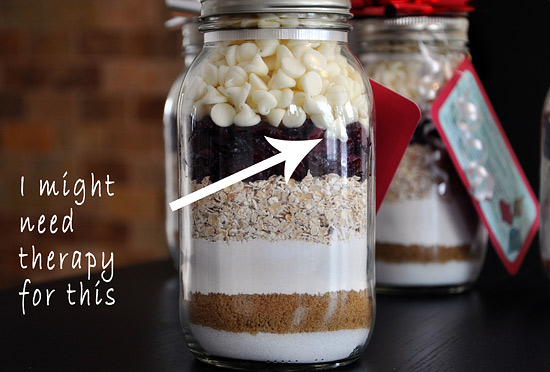 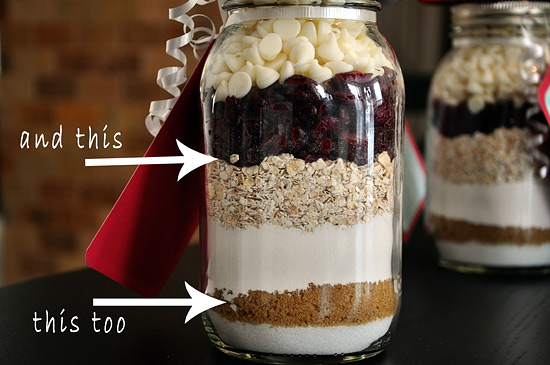 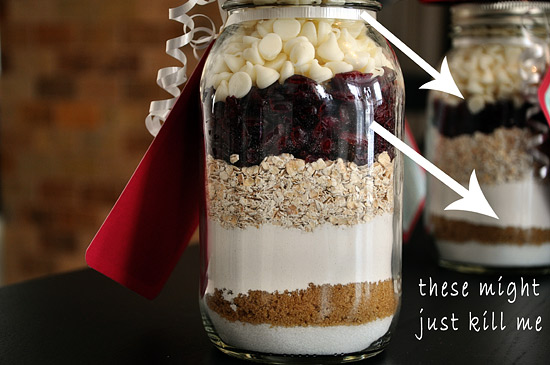 I don’t add the swatch of material at the top of the jar under the lid like most people do because that looks a little too homespunny for me and I’m about the farthest thing from homespun you can find because I don’t live in a little house on a prairie nor do my kids call me Ma and the last thing I churned was a stream of profanity when I discovered last week that the Whiskey River BBQ Chicken Wrap sandwich at Red Robin has 62 grams of fat in it.

Instead, I like to just plop pretty bows on top of the jars and call it a day.

I also attached a tag with curling ribbon to each jar. 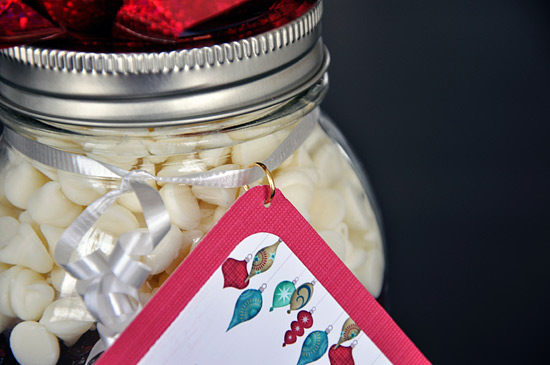 I didn’t like how the tag looked when it was attached directly to the ribbon because hello? Have we met? So I used a jump ring instead. I happened to have a bunch of them on hand and I liked the way they allowed the tags to hang neatly and gently alongside the jars instead of sticking out at a 43.7934 degree angle.

These are the tags I designed in Photoshop, printed out, trimmed and mounted onto red cardstock:

I used the Peace on Earth kit from Sweet Shoppe Designs. Three years later and a few thousand smidges to the left, nudges to right and teensy-weensies in all sorts of different directions, I was done.

Smidges, nudges and teensy-weensies are the lot in life for those with OCD tendencies. It’s a burden but we manage.

By the way, would you mind inching over to the left a teensy-weensy? You are not viewing this in the absolute center of your monitor. Don’t ask me how I know. I just do. Even from way over here. 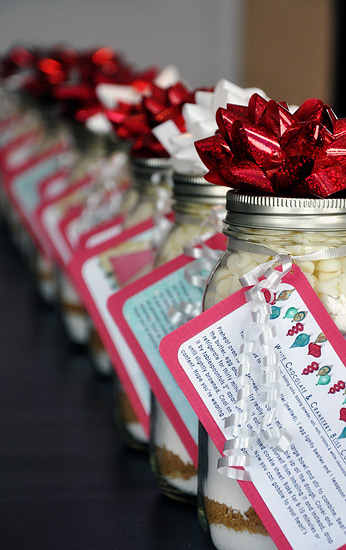 And here are the finished jars! 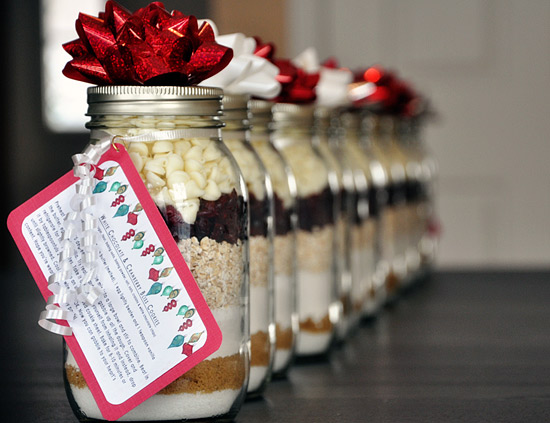 All in all, I’d have to say I’m pretty happy with them. 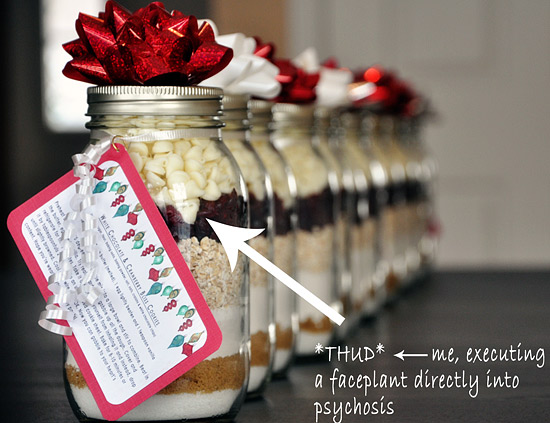 OH MY GOD, SOMEONE SHAKE A JAR OF PENNIES AT IT AND MAKE IT STOP.

42 thoughts on “This year’s cookie mix jars – who knew OCD tendencies could taste so good?”