I have a To-Do list so long I could probably hang the moon as a Christmas ornament from the earth with it. Up until yesterday, Get Eyebrows Threaded was at #31 but then I glanced in the mirror and was surprised to discover that a pair of stark white caterpillars had set up house on my forehead when I wasn’t looking.

Get Eyebrows Threaded has now moved up to #1, followed by #2: Now dye those suckers brown before people start asking you if you’re a natural albino.

I leave you with a post I wrote last year when I first started getting my eyebrows threaded and discovered a whole new world of face deforestation.

I had my eyebrows threaded.

On the very long list of things that bother me about my body, I’d say my eyebrows probably rank at #17, ahead of my gnarly knuckles which are so big, you can see them from space even without binoculars, but behind my thighs which, while ugly, are at least useful in a HEY, MOM, CAN YOU RUB YOUR THIGHS TOGETHER? WE WANT TO ROAST MARSHMALLOWS AND DINGBAT HERE FORGOT THE MATCHES kind of way.

When I was young, my eyebrows were fine. Actually, I could insert any number of body parts in that sentence and it would still ring true. Even if I italicized the “fine” so as to give each body part that nice OOOOOOOH, BABY, THAT’S SMOKIN’ HOT factor.

Something happened after I turned forty. Everything that was once smoking hot on me just went up in flames. Some smoldered for years prior, like my waist which ran away from home after my first baby and never once sent a postcard to let me know it was alive and living in sin with my thick, glossy hair, and others spontaneously exploded, like my skin which was once smooth and clear and then seemingly overnight, turned into crepe paper.

Over the past several years, my eyebrows have become bipolar. Sometimes they’re calm and rational and sometimes they’re completely manic, as if they just swallowed a bottle of tobasco sauce. More often than not, they’re unpredictable and unruly, just like my children. And no matter what I do to them or how much I scream at them or pluck them or tweeze them or wax them or yank them up by their ankles and try to shake the piss and vinegar out of them, they ignore me.

Are we talking about my eyebrows? Or my children? I forget. Did I mention that my mind was one of the first things to skedaddle when I hit the big 40? Actually, it might have been a lot earlier than that. I can’t remember because my memory ran away right around the same time.

So anyway, I decided that I would get them threaded.

We’re definitely talking about my eyebrows now, not my kids! I think.

Eyebrow threading is a hair removal method that simply uses cotton thread to remove unwanted hair. The thread is twisted and rolled along the surface of the skin, entwining the hair and yanking it from its follicles.

Did you feel that?

That was the gale force wind caused by the men fleeing my blog. All four of them.

Eyebrow threading is popular in large cities like New York City and Los Angeles but I live about three miles north of the middle of nowhere so when I called around for an appointment, I was met with a variety of responses, including: (1) Eyebrow what? Why? Did they fall off?; (2) We don’t have sewing machines here. Is that even legal, what you’re asking?; and my favorite, (3) I think JoAnn Fabrics does it. And you can use their 40% off coupon!

I think eyebrow threading originated in India and the Middle East, but I’m not sure. I’d google it for you but I’m hesitant to set a precedent like that because what’s going to happen if you come to expect that kind of effort from me? I’ll tell you what’ll happen. Everything will go smoothly for awhile and you’ll start thinking I’m one of those really smart people and then you’ll begin to actually depend on me and my plethora of knowledge. Until the day comes when I reveal my true identity as a Google moron and supply you with inaccurate information. So instead of learning how to duct tape a hem and staple on a button so you can get your daughter ready for prom, you’ll unwittingly learn how to hot wire your neighbor’s 1973 Corvette and next thing you know, you’re living in prison, married to some large boned woman named Pete.

Welcome back, testosteronies! You heard me type 1973 Corvette out loud, right? And there was that faintly whispered implication of women engaging in lesbian sex. Am I right? What is it about owning a y chromosome that makes you so predictable?

So as to avoid the entire prison debacle, I’m going to ignore Google entirely and instead, show you this video where you can be mesmerized by all sorts of threading, including eyebrow, chin and neck:

That was the sound of testosterone, passing out. 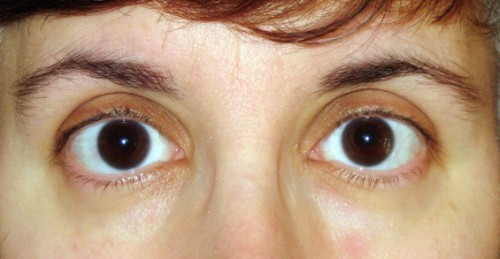 This is my “before” picture. See what I mean?? Unruly. Disheveled. Whackadoodle-ish. All over the place. Schizoid. Freaky.

I’m talking about my eyebrows, not my myopic eyes or my blotchy skin or the appalling lack of anything remotely resembling foundation, concealer or mascara.

Just in case there was any confusion.

Let’s deal with one catastrophe at a time, shall we? 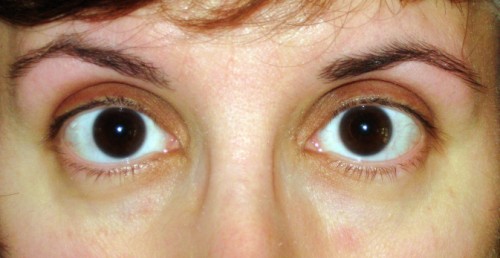 This is about twenty minutes post-op. The redness faded after about an hour. Unfortunately, the myopic eyes and blotchy skin and appalling lack of anything remotely resembling foundation, concealer or mascara still remain. Even now, eight hours later. Listen, I can only deal with change, no matter how infinitesimal, in microscopic increments, OK?

I can’t really say that it hurt. It depends on your threshold of pain. I happen to have a high threshold of pain. Then again, I’ve lived through the eighties, the breakup of Journey, Cop Rock, two c-sections and three perms, not to mention the fact that I’m currently raising two daughters, one of whom is learning fourth grade math and the other of whom is busy being a teenager. With hormones. Add my mom into the mix and I’m pretty sure you could shoot me at point blank range with a canon and I wouldn’t flinch.

That’s what I thought.

I would definitely do it again. It only took five minutes and if I’m going to pay someone to deforest the northern hemisphere of my face, I much prefer to pay for five minutes of mild discomfort with good results than five minutes of HOLY BALLS OF SATAN hell with mediocre results from having hot melted wax smeared on my eyebrows so that they, together with the first two layers of my epidermis, could be ripped off my face in two inch strips.

The eyebrow threading cost me $12 plus tip which, from what I understand, is a little pricey for this service but when you live in East Bumble and count cows as your closest confidants, you take what you can get.

Now, I should clarify … I don’t think this method of hair removal is recommended for regions south of the border. This is where Google can be your friend. Not mine. Don’t entrust the grooming of your lady garden to me and my Google skills because you could wind up with a roller rink or a chia pet down there. If my fingers are feeling particularly dyslexic, you could also find yourself installing a home theater system in your powder room, complete with a 120 foot high definition TV, a pizza oven and a beer fountain.