Weekend regurgitation: I’m going to build a maize maze out of donuts and call it a Glaze Maze. Who’s with me?

We made our annual pilgrimage to the farm market a few weeks ago where we practiced just a few of our family traditions:

When we were done eating, I commented that hey! We should buy donuts and smoosh them into the ice cream! Yay!

We paid way too much money for pumpkins.

I stated for the record that we were paying way too much money for pumpkins.

Nate and the girls headed for the corn maze.

I collapsed to the ground and pretended to have a gallbladder attack.

I leave you with the post I wrote a couple of years ago about how we typically approach corn mazes and my philosophy on them: donuts are life’s reward for sucking it up.

Next time I do a corn maze, I’m leaving my bladder at home

How many of you have experienced a corn maze?

The first time Nate and I attempted a maize maze was before we were married. Nate lived near a farm famous for its corn mazes. Having never done a corn maze before and knowing this farm was geared towards children, we assumed the maze would be small and relatively simple.

And that is how our names and faces came to be forever immortalized under the entry of “Idiot” in the Big Book of Stupid, immediately next to an example of the kind of maze we attempted: 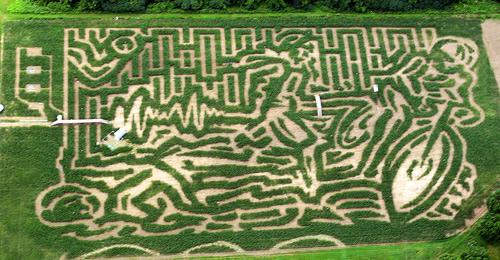 In our defense, we had no airplane, helicopter, hand glider, catapult, hot air balloon, space shuttle or really big bird to obtain an aerial view so we had no way of knowing that the corn maze we were about to enter was the second man-made creation visible from outer space, with the first being the Great Wall of China.

But it doesn’t matter because we’re still in the Big Book of Stupid.

So on a sunny, blistering hot day, we arrived at the farm wearing short sleeve shirts, shorts and no sunblock and no hats, carrying no water, no snacks and no common sense. We had nothing but big, fat bumper stickers that read CLUELESS which we immediately stapled to our foreheads at the entrance to the maze. Before entering, we were given the solution to the maze in a sealed envelope as well as a tall, brightly colored flag that we could wave in the event we found ourselves on the brink of insanity. Nate’s cajones swelled up to ten times their normal size at the mere thought of this challenge and he grabbed that envelope and the flag and I knew that he would no sooner open the former or wave the latter than sing God Bless America at the top of his lungs while standing naked on his roof in the dead of winter.

Ninety minutes and five pounds of boob sweat later, when I was delusional from dehydration and the third degree sunburn covering my body, I flung myself over the brink of insanity and did a face plant directly into the heartland of psychosis. I tackled Nate and sat on him and told him in no uncertain terms that I was <this> close to drinking my own pee for survival which was tantamount to Ick, Blech and Gross to the tenth power and if he did not unseal that envelope in the next five seconds, I would separate his cajones from the remainder of his body using only my elbows SO OPEN THE &!*%$ ENVELOPE AND GET US OUT OF HERE OR SO HELP ME GOD, THE FLAG WON’T BE THE ONLY THING WAVING IN THE BREEZE.

Helena, you walk this earth today because God saw fit to equip me with freakishly pointy elbows. Who knew they would one day save my life and ensure your conception?

Nowadays, we’re a family of four and every year, we do a corn maze but we stick to the smaller ones where there is no fear of castration or pee guzzling because we can easily navigate them in twenty minutes or less and when I say “we” I mean Nate, Zoe and Helena as I have a hard time finding my way out of my own driveway without a map. I am there strictly for moral support and chocolate donuts. I’m all about the donuts. They’re totally worth the effort of walking around and around in an endless circle for a bit.

Is an endless circle redundant? I think it is, but that’s OK because so am I and I am too. 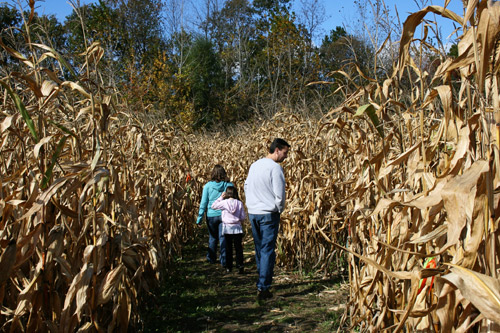 This is how we typically start out, with the girls leading the way, followed closely by Nate who studies every single corn stalk and commits them to memory in hopes of recognizing them the second or third or fourth time we walk by them.

My job is to bring up the rear. There’s a joke in there somewhere but I’m too lazy to hunt for it. 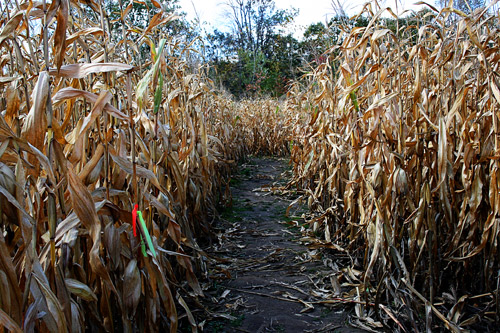 Anyway, this is what it looks like to bring up the rear. No one cares about the rear.

No one waits for the rear to check the settings on the camera or to tie her shoe or to berate herself not only because she has the bladder of a gnat but also because she forgot to go to the bathroom before leaving home.

It’s not easy being the rear. 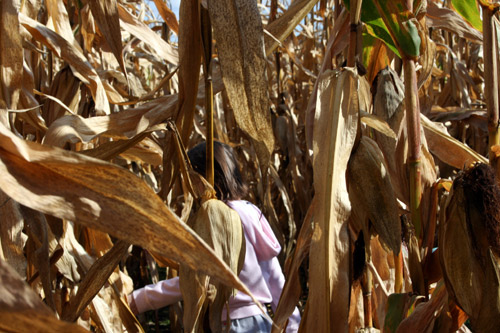 Here is my youngest offspring, so intent on solving the maze before her older sibling that she is completely oblivious to fact that the rear is one row over, trying in vain to will her urinary tract system into behaving itself until such time as indoor plumbing is available. 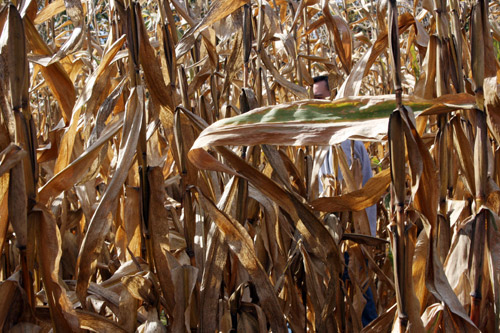 Here is my beloved paying no attention to the rear as she fights off imminent incontinence two rows over. He might have been busy having flashbacks to the last time his cajones and my elbows shared a corn field. 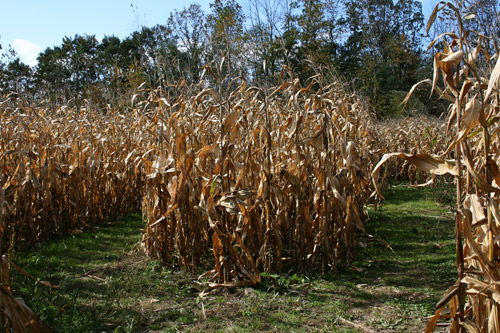 It’s lonely bringing up the rear when renal failure weighs heavy on your mind and there’s no one around to tell you to get a grip on yourself.

This is what feet look like when the legs they are attached to are too scared to move lest the bladder to their immediate north decides to seek retribution for having been made to wait for an excessive amount of time in a God forsaken corn field in the middle of nowhere.

I yanked on my theoretical big girl panties and told my bladder to SUCK IT UP, literally, and I trudged on in search of my kin and donuts. 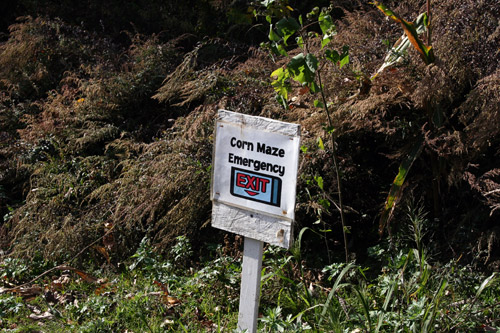 I finally met up with my kin and once again, I brought up the rear. I practically wept with joy to see this sign but no one else was too excited because apparently the word “emergency” sucks all the fun out of the adventure. I was totally OK with the word and had no problem with sucking the fun out of anything at that point but I was outnumbered and we continued on, much to my kidneys’ dismay. 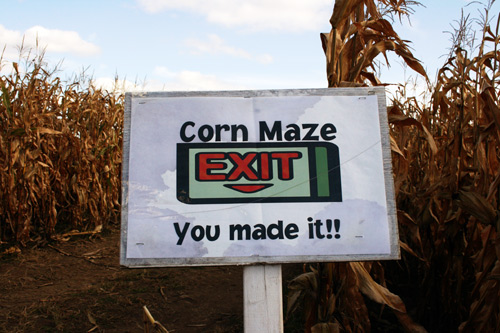 Finally, we came across the exit that would allow us to emerge from the maze with our dignity and my bladder intact and I did the happy dance all the way to the ladies room.

And then we finally experienced the fried, round, chocolate covered taste of victory and washed it down with a cold glass of apple cider.

Totally worth the inevitable bladder infection, I kid you not.

5 thoughts on “Weekend regurgitation: I’m going to build a maize maze out of donuts and call it a Glaze Maze. Who’s with me?”