Weekend regurgitation: It’s July 4th. Don’t sit too close to me or you’re liable to get my ash in your eye.

It’s going to be beastly hot out today. It’s also going to be July 4th which works out perfectly because no one will even notice as my head pops off my body and explodes into a million tiny pieces when I succumb to heat stroke. People will simply shake their glow sticks at me and yell “Oooooooh” and “Aaaaaaaah” and “Do it again, Mom! Do it again!”

My sister is coming to visit next week from San Francisco so I think it’s only fitting that I leave you with the post I wrote about her almost two years ago. Not much has changed since then … she’s still ten years older than me but looks ten years younger, she’s still a free spirit and she’s still very much inclined to do only what her mind, body and spirit tell her to do.

Here’s hoping they tell her to teach Oliver to poop outside.

Happy Fourth of July, everyone! And for everyone outside the U.S., happy Sunday!

I left my heart … and my sister … in San Francisco

My older sister is coming here for a visit this week and I’m really looking forward to it. I can’t wait to see her and catch up and hang out and my kids can’t wait to have someone new and shiny to play with, someone who is not addicted to a computer, willingly sweats, doesn’t yell WHO LEFT THEIR TOWEL ON THE BATHROOM FLOOR? and doesn’t make them clean their rooms. It’s a win-win.

This photo was taken about twenty three years ago, when we were about eighteen and twenty-eight respectively. I’m the one on the left, in case you couldn’t tell. Hah! See what I mean? You couldn’t tell, could you? 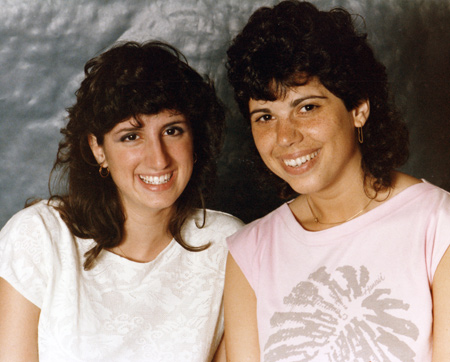 Try not to be distracted by the bulbous honker in the middle of my face. Hello? Are you listening? I understand. It’s like an accident on the highway … you can’t help but stare at the carnage. So go ahead and stare and get it out of your system.

I ask you … does she look ten years older than me? She was approaching thirty in that picture. Want to know what I looked like at thirty? Neither do I.

Here she is two years ago, with Zoe. She was nearing fifty at the time. Does she look fifty to you? Want to know what I’m going to look like when I’m nearing fifty? Neither do I. 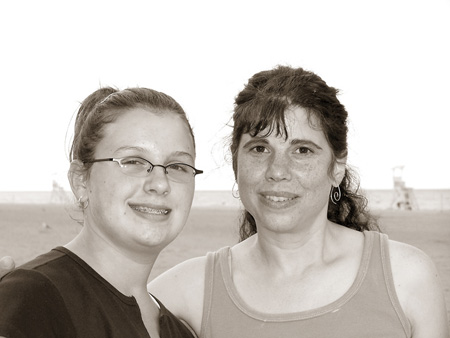 Elaine babysat Tino and me quite a bit when we were young. She did a pretty good job and I’m just going to forget about that time she hid in my closet when I went to bed and every minute or so, jiggled my closet door ever so slightly to make me nervous and unsure about the whole “monsters aren’t real” conversation and then let out a deep, bellowing BWWWWWWWAAAAAAAAAHHHHHHHHHHHH and whipped open the door and scared the living shit right out of me and I dropped dead right there on my bed, in my jammies and clutching my favorite stuffy named Chocolate. Like I said, I’m just going to forget all about that because it did not traumatize me whatsoever at all. I barely remember it.

Because we did not grow up in Leave It To Beaver Land, she moved out of the house relatively early in my life and although she came back a few times on a temporary basis, she never actually really lived there again. At some point, she had an apartment in a big old house and I can still smell the new white paint and see the yellow bathroom accessories she had purchased but more than that, I remember the ride over there. She drove something dark green that was a cross between a Pacer and a Gremlin and she was more concerned with who was on the radio than who was on the road. She used one hand to steer and the other to systematically change the station every nano second until I finally shouted STOP IT, STOP IT, STOP IT with an occasional OH MY GOD, WATCH OUT thrown in for good measure.

My entire family has done the Let’s-Abandon-Andy-And-Move-Out-Of-State bit so I’m used to it. Thankfully they’ve all chosen destinations that are nice to visit, like Las Vegas and North Carolina. But the best destination prize goes to Elaine because she chose Hawaii and San Francisco and those are two places that by law, must be visited in order to die happy. If you ask me, I’d say she chose Hawaii because in her heart she knew how much her little sister wanted to visit there. If you ask her, she’ll tell you it was the cheap rent offered by her friends. I prefer my version, don’t you?

We went to visit her in the early eighties when I was about fifteen. I remember the islands as being drenched in unspeakable beauty and I remember getting “leid” as I walked off the airplane and I remember luaus. And with striking clarity, I remember standing in Elaine’s living room with my parents and having Tom, one of her friends, walk out of his bedroom, shirtless. I was fifteen and he was smokin’ hot so I was happy. He was happy too because he had apparently been busy with the beautiful Hawaiian girl who emerged after him, bottomless. And then we all stood around in air thick with JUST KILL ME NOW until my parents dragged us out of there and we never spoke of it again.

After Elaine got tired of Hawaii, she moved to San Francisco where’s she’s been for the last 20+ years. I flew out to visit her when I was twenty-one and fell utterly, hopelessly, completely and totally in love with San Francisco and I would have brought the Golden Gate Bridge home with me if I could have fit it in my suitcase.

Elaine had to work one day so I spent the entire day by myself at Ghirardelli Square and Pier 39 and I saw so many new and wonderful sights like cable cars, quirky gift shops, totally cool jewelry and homosexuals. There was nothing like it, that I knew of, in my little podunk town back home. I was mesmerized and caught myself staring more than once and probably had “hick” written all over me in fluorescent pink paint.

That was the first time I had ever seen a street performer. He was on the sidewalk, decked out in this creepy, box-like, shiny silver outfit. I had no idea why he was just standing there, not moving a muscle. I stopped and did my “we don’t have anything like you back home” stare. And then I nearly jumped out of my skin when he moved his eyes to look at me. I smiled nervously and tightened my grip on my Ghirardelli chocolate because paranoid freak that I am, I was convinced that I was mere seconds away from being mugged by some Wizard of Oz Tin Man wannabe who had most likely just gone off his meds. But he wasn’t interested in my chocolate. He just kept dropping his eyes to this container at his feet. Over and over he would do this and I would just stand there, munching on my chocolate, nodding and smiling at him, wondering what the hell he was doing. Then he must have seen the fluorescent pink paint all over me because he proceeded to ignore me in favor of other people who had gathered around and who were throwing money into his container. Lots of money. After they threw lots of money, freaky guy did this robotic dance thing. And then I had one of those “OH” moments that I’m always so proud of.

Elaine came and got me and no sooner had we walked a couple of feet when this woman in a dingy, faded, torn police uniform stopped us dead and declared that she was sorry but she had to give us a ticket. And because I was delusional from the fumes of that pink fluorescent paint, I immediately yelled OH MY GOD, WHAT DID WE DO? WE’RE SORRY! WE’RE SORRY! and then I ran to hide behind Elaine’s back in case she was some insane lunatic intent on slashing my throat. Elaine rolled her eyes and and asked how much it would cost to get out of the ticket and the lunatic said $1.00 and Elaine gave her a couple bucks and I had another “OH” moment.

We went out to dinner to a place Elaine had never been and it was the first and last time I ever had Thai food in a gay restaurant. Half way through our meal, Elaine and I glanced around and we both had an “OH” moment when we realized that we were surrounded by same sex couples. That was interesting and I couldn’t wait to tell my podunk friends how worldly I had become in only a few short days on the west coast.

That was twenty years ago and I still count that trip as one of my all time favorite vacations.

For the past several years, Elaine has come over to the east coast to visit once a year, usually during the summer because she can’t take the winter weather. In that respect, she is like every other member of my family who moved away to far off, sunny locations and who suddenly become allergic to sleet and snow and ice and sub-zero temperatures because they have mentally blocked out the sentence they served in these here parts.

In every other respect though, she is different from all of us, especially me.

She is a free spirit. I am immediately suspicious of anything that is free because I know it’s going to cost me in the long run.

She goes with the flow. I go against the flow, I fight the tide, I swim upstream. I’m like salmon, except that I don’t swim in my own poop. And I don’t swim upstream to spawn, unless there’s a five star hotel and room service waiting for me.

She backpacked through Europe. I don’t do anything where I have to carry stuff, let alone on my back.

She is very into holistic and alternative forms of medicine. I don’t stray from our outrageously expensive health insurance plan because I am a big fat chicken.

But as different as we are, we still manage to get along quite nicely and I can’t wait for her to get here. Her flight comes in after midnight and we’ve got Helena’s birthday party with nine eight year olds later that day, as well as a family party at night. I’ve already warned Elaine that she is not allowed to indulge any jet lag symptoms as I am expecting her to help me not screw up the hydro bracelet craft I’ve organized and then entertain the kids as I get the cake ready and then supervise the girls in beating a piñata to death and then not blink the entire time they are in the pool.

Sometimes it comes in very handy to have an older sister who is healthier and more energetic than me.

8 thoughts on “Weekend regurgitation: It’s July 4th. Don’t sit too close to me or you’re liable to get my ash in your eye.”