Before life was flushed down the toilet last week, we spent an afternoon at a local farm, picking out our pumpkins. The rule is the same every year: any pumpkin is yours for the taking as long as you can carry it to the wagon without a hernia or the assistance of a forklift. Staying true to his competitive nature, Nate typically works out with weights and mainlines steroids for a whole month before Halloween.

I leave you with a post I wrote two years ago about carving our pumpkins. I fully intended to include a shot of Nate’s 2009 masterpiece when I started writing this post but I forgot that I’m 800 miles away from the photos on my hard drive at the moment. No biggie … just read the post below and you’ll see half a dozen extremely reasonable facsimiles.

It’s like the movie Groundhog Day, only more orange

I think I’ve mentioned before that I’m allergic to change. It doesn’t sit well with me. I like things that I can count on, stuff that stays the same. Familiarity. I count on it. I depend on it. It comforts my soul, much like macaroni and cheese but without as many calories or the ensuing cellulite. No one likes a cottage cheese textured soul.

So don’t go changing the thickness of my paper towels or the thread count of my sheets or the concentrated power of my laundry detergent.

Don’t change the aisles at Wegmans because chances are I don’t want to be grocery shopping in the first place and if the peanut butter is not where it’s supposed to be and I’m staring at toilet paper instead, someone is going to have to get Helena off the bus because I’m going to be busy having one whopper of a hissy fit in aisle three.

And don’t change the menu at my favorite restaurant because chances are I’m starving and if chicken french is no longer an option, worlds will collide and mine will implode all over me, as well as every other diner within a twenty yard radius of my table. Who wants my world in their food?

I also think I’ve mentioned in this blog that the only exception to my routine rule is wall paint. I love to change the colors of our walls and when I say “I” I mean that in the “have Nate do it” sense. Unfortunately, Nate experiences sleep apnea while he’s awake anytime I broach the subject. This makes for some heated discussions and intermittent CPR incidents but I won’t get into that here because I don’t like to air my dirty laundry in public, unless someone is willing to wash it for me.

So, I like to be able to depend on things. And in our household, there is one thing that is so dependable, so familiar, so routine, something I can count on more often than missing a big patch of hair on the back of my legs while shaving or having Zoe break at least one bone per calendar year or having a monsoon flood our yard on the day of my kid’s swim party, leaving me trapped in my living room with eighteen seven year olds armed with pool noodles.

That one thing is Nate’s annual jack-o-lantern. 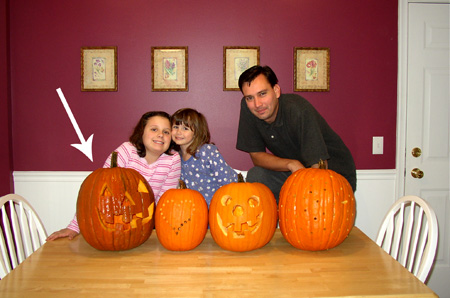 Here’s his pumpkin for 2003. It kind of looks like it’s a few peas short of a casserole, but in a sweet way, don’t you think? Zoe’s looks happy too. This particular year, I decided to be all sophisticated and snooty and channel Martha Stewart by drilling holes into mine and Helena’s pumpkins, much to the disgust of Nate who believes that a pumpkin without a face is like watching TV without holding the remote. Why bother? 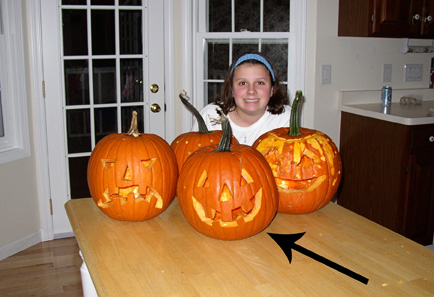 Here are our 2004 versions. Notice that Nate’s bears a striking resemblance to its 2003 counterpart.

Do you care? I didn’t think so.

No, we don’t set out to carve art into our pumpkins. We practice the Chamberlain method of pumpkin carving, which can best be described as JUST STICK A KNIFE IN IT AND SEE WHAT HAPPENS AND FOR GOD’S SAKE, DON’T SLICE YOUR FINGER OFF WHILE YOU’RE AT IT.

Zoe always does a pretty good job with her pumpkin although here, hers appears to be in need of an attitude adjustment. I’m not sure what’s going on with Helena’s but maybe we’ll think twice about giving her a machete and turning our back on her for twenty minutes. Mine’s got holes drilled in it again. I could say that Martha’s method really made an impression on me, it spoke to me and I felt it to be a timeless and classic approach to gourd ornamentation. That sounds so much better than admitting I was lazy. 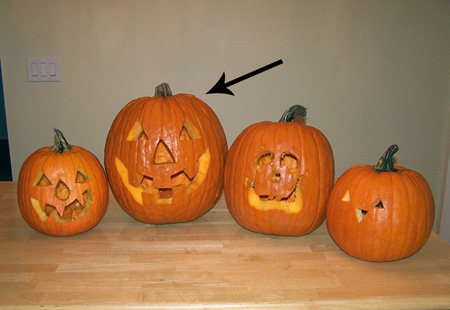 Our 2005 line. If I didn’t know better, I’d say Nate is practicing cryogenics behind my back.

I like Zoe’s pumpkin … it kind of looks like her Great Grandpa Fred, may he rest in peace. Helena had Nate carve hers into a “Mini Me” version of his own except with sharper teeth. They actually look surprisingly alike, almost like father and daughter, don’t they? The pumpkins, that is. Well, to be fair, Helena does look a lot like Nate in real life which really isn’t fair at all because with the exception of a few minutes, I did all the work.

Speaking of pumpkins, no, I wasn’t just lazy with mine. My arms just fell off unexpectedly before I could finish it. 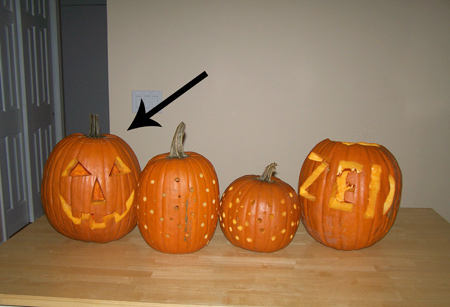 Zoe decided to carve the French pronunciation for “Z” into her pumpkin, namely “Zed.” Is she French? No. She’s half Greek. But she goes to Canada a lot with her father in the summer to watch him race motorcycles and they hang out with French speaking people who love to call her Zed. Why? I’m not sure and I’m too tired to cross the border and ask them. In any case, I’m just grateful they don’t call her mon petit chérie. She would have been up way past her bedtime.

I wish I had a story behind my pumpkin. Why didn’t anyone yell ENOUGH ALREADY and take the drill out of my hands and knock me over the head with it? And before you start saying I’m exactly like Nate and make my pumpkins look the same every year, I’ll draw your attention to year 2005 to prove that I have not drilled my pumpkin every year. And don’t even bother looking for a gutter in which to toss your mind. This is not that kind of blog.

I do think it’s adorable that Helena wanted to imitate me this year. The one and only time she’s wanted to be like me and I couldn’t work up an ounce of creativity or originality.

The story of my life. Look for it at Barnes & Noble near you this holiday season.

Damn you and your drill bits, Martha. 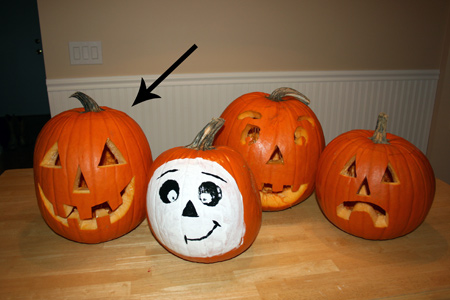 Last year’s pumpkins. IT DOESN’T CHANGE EXPRESSION. EVER. And I swear it’s following me with its empty eye sockets, like some maniacal squash incarnation of the Mona Lisa with horrid dental work.

Zoe’s looks like it’s pleading for someone to get it the hell away from the freak of nature on its right. Or maybe it’s just got the heebie jeebies from whatever the hell that white thing is sitting directly in front of it. People, if you’re going to take the drill out of my hands, for God’s sake, don’t replace it with a paint brush. And Helena’s poor little pumpkin looks like it totally agrees with me.

STOP LOOKING AT ME. 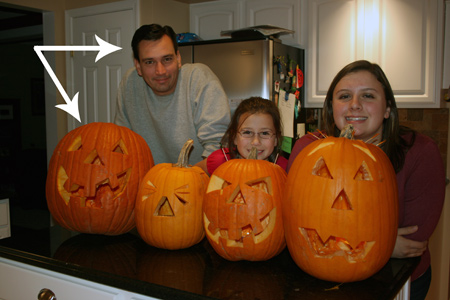 Introducing our 2008 line-up. Nate’s creation is not giving me the hairy eyeball this year. It’s too busy looking up to the Big Heavenly Pumpkin in the sky, wondering how many times it has to spoil and rot and turn to mush and get dumped in the trash, only to be reincarnated in our kitchen one year later. I wonder that very same thing. What’s up with that, Big Heavenly Pumpkin?

Zoe’s and Helena’s pumpkins look rather cute and very halloweeny. I’m not sure what happened to mine. It was two days ago and I can’t remember that far back. I think I was going for some sort of Asian geometric fusion and then changed personalities as I’m prone to doing and decided to make it look like it had been punched in the face and then switched personalities again and decided to just up and quit already.

I’m not sure if that’s better or worse than going all Martha Stewart on it.

In any case, I’ll meet you back here in a year and show you our 2009 fall line, where I’ll introduce you to Deja Vu a la Orange’s identical twin brother, Been There – Done That.