Weekend regurgitation: My survival kit, in the event terrorists aren’t in it for the long haul

Today, I am in the mood to clean a closet. I don’t know which closet it will be yet but my money is on the one in Helena’s bedroom. If closets were wombs, I’d call that one Michelle Duggar. The thing is constantly having the same stuff shoved into it and before you know it, a whole slew of different stuff is always popping out of it.

I leave you with a post I wrote a year ago about what came out of my own closet when I cleaned it. And for all you smart asses out there, no. It wasn’t Anderson Cooper.

If I’m ever in charge of the survival of humanity, we are in serious trouble

We are bringing home our canine baby in a little over one week and I am in full nesting mode, much like I was before I brought home my two human babies. This means that I am cleaning and organizing everything, including the dust bunnies on either side of my stove which are now organized from smallest to tallest so if the puppy ever wedges himself in those crevices while chasing a wayward piece of kibble, he won’t be immediately freaked out by a hairy monster twice his size.

I suppose I could have gotten rid of the dust bunnies entirely but then who would keep the puppy company as we are running all over the house yelling OLIVER! WHERE ARE YOU? OH MY GOD, DID SOMEONE STEP ON OLIVER? QUICK, CHECK YOUR SHOES.

So as I’m scrounging around our bedroom closet, I spot this blue box that’s been sitting in the corner for about two weeks shy of forever. I’d always ignored it, assuming that it was one of those things that followed me from house to house to house and contained crap I’d never need again but felt compelled to save nevertheless, not unlike the stained, ripped cardboard boxes in our basement filled with my elementary school history, including my fourth grade essay entitled Yellow Brown Trees with Yellow Green Leaves which was an exercise in both iambic pentameter and How to Be a Word Nerd 101.

But my curiosity finally got the better of me, not to mention the fact that the damn thing was taking up some desperately needed floor space so I dragged it out of the closet and down to the kitchen. 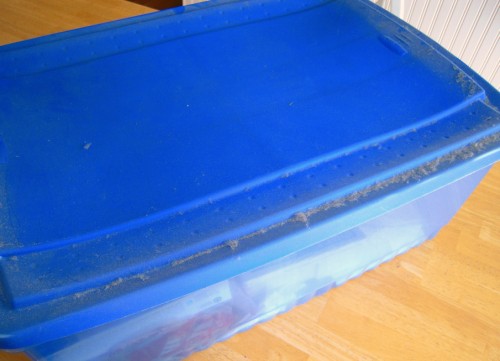 Judging by the lid, I can only assume that the dust bunnies by our stove are prolific, fertile little buggars who scamper up to our closet for quickies. I must hop online after I write this and order a brand new nose since I sneezed the current one right off my face. The track lighting we have above our kitchen table is now blinged out with about $2,000 worth of twenty year old rhinoplasty. 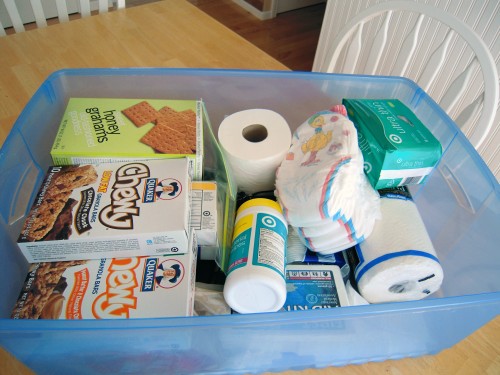 I opened the lid and instantly recognized the survival box I had assembled over eight years ago, sometime after September 11, back when I was convinced we were only two or three CNN segments away from full blown Armageddon and I wanted to be prepared in case Nate and I had to do our part to help repopulate the earth.

Two things became immediately apparent to me as I glanced at the contents of the box: (1) I’d have to work my way up to being an idiot; (2) judging from the appalling lack of toiletries such as clean undies, soap, toothpaste and deodorant, the chances of Nate and I having post-Armageddon sex was practically nil.

Make that absolutely nil. I neglected to pack a razor. 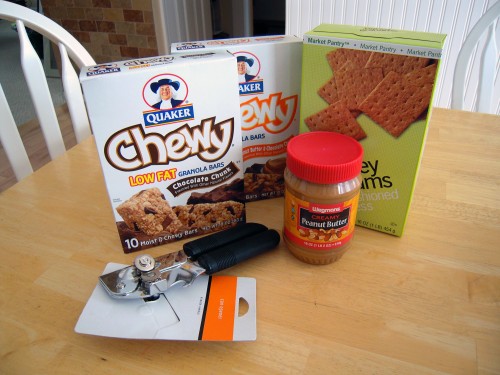 That’s it. That’s all the sustenance I managed to gather, despite being centrally located to at least three Wegmans within a six mile radius. Our family of four would have lasted … what? A week, maybe? Or 36 hours, depending on whether or not I had my period.

No non-perishables. No MRE’s. No bottled water.

No lighters or matches or propane or charcoal or firewood or anything with which to make a fire.

No utensils of any kind.

No pots or pans or Pyrex or Le Creuset or George Forman grill to be found. You know, in case I wanted to make a granola casserole or something.

Worst yet, no Milky Ways, Dove Chocolate or Toblerone bars. No decent chocolate of any kind which begs the question, would Armageddon even be worth surviving?

Oh! And no canned goods. Anywhere.

Which begs the question, what the hell is the purpose of the can opener?

I mean, other than to mock me for buying a brand new one two weeks ago. 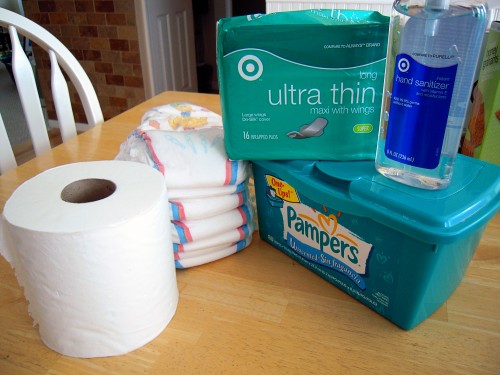 I packed one package of pads. ONE. Generic and ultra thin, no less. If my uterus had a nose, it would be snorting milk out of it as I type. We would have lasted two days tops, right up until I soaked through my one and only pair of undies and then I’d have had no choice but to go around stealing everyone else’s undies and living out the remainder of my life on the run from a resentful humanity forced against its collective will into running around commando.

And look … seven diapers. Seven. Helena was one year old at the time and the human equivalent of a soft serve ice cream machine. She had the habit of waiting no more than twenty minutes before filling up a fresh new diaper with a jumbo sized chocolate to go. With sprinkles.

We would have lasted less than a day before she soaked through that last diaper and asphyxiated all of us with the stench.

One … count it … ONE roll of toilet paper. ONE.

Forget everything I said. We would have lasted twenty minutes before the roll ran out and it would have been anarchy. 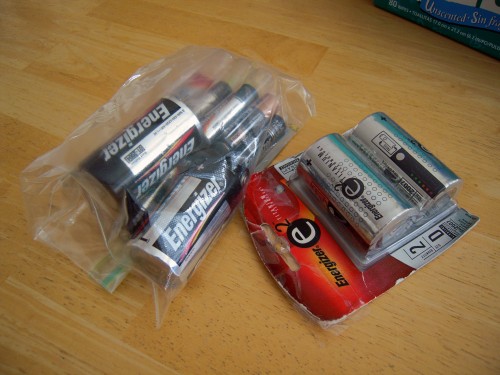 Nothing to put them in, mind you. Like, maybe a radio. Or walkie talkies. Or even a flashlight.

Numnuts, party of one? Your table is ready. 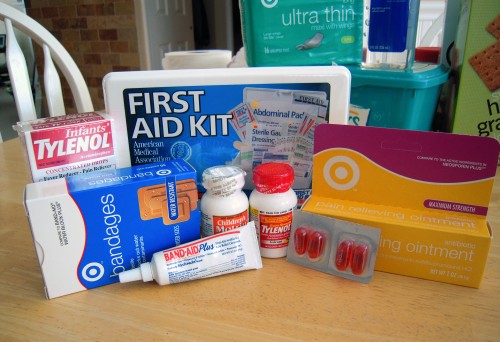 As if I could survive Armageddon on one tiny bottle of extra strength Tylenol. For God’s sake, I sprinkle more than that on my cereal when my mother comes to visit.

Where’s the needle and thread in case I need to sew a leg or finger back on? Assuming I learned to sew before the apocalypse?

Better yet, where’s the stapler?

Don’t ask me why I felt it necessary to pack 4 capsules of Dayquil.

I need a t-shirt that has an arrow pointing upwards and says “I’m with Numnuts.” 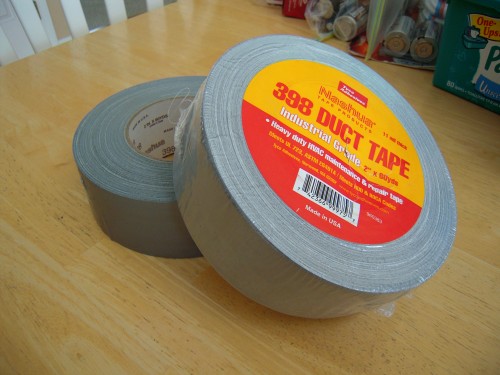 I remember totally buying into the theory that sealing up our windows and doors with duct tape would protect us in the event of a biochemical attack. Apparently, I dozed off during the whole bit about plastic sheeting and gas masks.

But at least I was fully prepared in case the girls suddenly needed their pants hemmed.

Did you freak out during that time and assemble a survival kit? Would you have made the Girl Scouts proud or would they have stripped you of all your badges and pelted you with Thin Mints?

At least you would have gotten some chocolate out of the deal.

7 thoughts on “Weekend regurgitation: My survival kit, in the event terrorists aren’t in it for the long haul”