Weekend regurgitation: Not shopping at the mall

Today, for the first time in a week, I will not be going to the mall.

I will not drive up and down a congested parking lot.

So that I can exchange something.

Or so that anyone else can exchange something.

Or spend the money or gift cards they received for Christmas.

While I stand there with no money or gift cards.

Staring at the outfit I bought two weeks ago that is now 90% off.

Nor will I utter the words No, I am not buying you a pretzel.

Or I don’t care if Auntie Annes has the best pretzels on the planet.

Nor will I holler after my daughter MAKE SURE YOU GET ME A PRETZEL SIX PACK WITH A SIDE OF CREAM CHEESE.

I leave you with a post I wrote … wow, almost three years ago now … about another Christmas season when Nate decided not to go to the mall either.

We’re all familiar with this little gem, right? I give you the Wii, in all its glory: 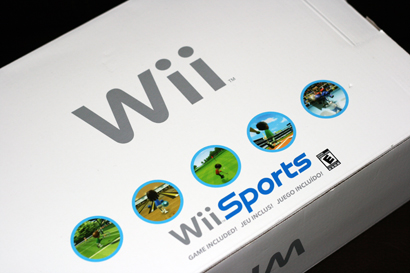 TV did you say? You mean that 42″ ultra modern, flat-screen behemoth of high-definition that dwarfs everything around it and currently resides in our living room with all of our normal sized furniture? That “bargain” of a monstrosity that was only going to cost this much but actually wound up costing that much because we couldn’t have a TV like that without having the proper stand on which to put it, the appropriate receiver with which to run it, the best speakers with which to hear it and the top-of-the-line remote with which to control it? The TV I didn’t want? That one?

We had a sit-down with the kids to discuss the Wii vs. PS3 scenario. Nate had our eldest almost convinced that PS3 was the second coming while our youngest was steadfast in her desire for a Wii but willing to negotiate in exchange for a later bedtime. I finally convinced the family that the Wii was the better choice as it retailed for about half of the PS3 and was better suited for family time. It was a struggle and there were tears and temper tantrums and hissy fits but Nate got over himself and finally conceded.

Nate thought he would just walk into Target or Best Buy and pick one up after work. I asked him if something heavy had hit him on the head and then dragged him to the aforementioned behemoth parked in our living room so that he could see the CNN sound bites showing mobs of people lining up for days to get one. It then became Nate’s personal mission in life to get us a Wii, come hell or high water, so help him God.

To his credit, Nate did try the conventional approach once. He woke up at 4:00 am, drove through the bitter cold, sleet and snow to stand in line at Kmart for a shipment of Wii Systems expected that morning (by the way, what exactly is the plural of Wii? WiiWiis?) After about an hour, a blithely unaware Kmart employee came out and announced to the 50+ cold, wet, hungry, caffeine-deprived customers that a newly arrived shipment of twenty-six Wii Systems would be available in minutes. I have no idea if that poor guy ever made it out alive. All I know is Nate came home around 6:00 a.m., empty handed and with a dazed expression, mumbling something about mob mentality, rioting and Darwin’s Law.

I told Nate about an online service that sent notifications of newly arrived Wii Systems at local Wal-Marts and wouldn’t it be a nifty idea if we signed up? No, apparently we did not have time for such nonsense and besides, Nate had a plan.

On November 21, 2007 Nate purchased a brand new, unopened, factory-sealed, receipt-attached Wii off eBay. He paid nearly double the manufacturer’s suggested retail price. Approximately 9.2 seconds after submitting his PayPal payment, he became ticked that the seller didn’t immediately respond. Through gritted teeth, I suggested that he calm the hell down and give the seller a break since it was the night before Thanksgiving. Then I left the room before I killed him.

On November 22, 2007, after Thanksgiving dinner, Nate purchased a second brand new, unopened, factory-sealed, receipt-attached Wii off eBay for a little over double the MSRP as a backup plan. I should have known something was up as he had been staring at his laptop for hours, during which time I actually touched and held the TV remote, an act that normally causes him to twitch, break out in hives and have a seizure.

Did I mention that the receipts clearly showed that both Wii Systems had been purchased from a Wal-Mart? I didn’t? Well, they did. And it was all I could do to remain vertical as I literally watched sparks fly off my body and fought the urge to dismember him right there on the spot. Then I disassociated from my earthly body and went to the Land of Denial where it’s sunshine all the time and no one bothers me and I look thin and pretty.

A couple of days later, we were the proud owners of two brand new Wii Systems. And then Nate came home from work and what do you suppose he was carrying? Flowers? Chocolate? A prescription for Xanax? No. He was carrying a third brand new, unopened, factory-sealed, receipt-attached Wii.

When he saw that I was nanoseconds from outright spontaneous combustion, he quickly explained that he had purchased this Wii for only $30 over the MSRP, no eBay/PayPal transactions were involved, and he would list the other two Wii Systems on eBay that very night and recoup our money. I questioned him as to where he got this particular Wii. Oh, funny story this one … his co-worker bought it from Wal-Mart that very day. And how did he know to go to Wal-Mart that very day for a Wii? Nate muttered something about a lucky email. Oh yeah, that extra $30? That was just to compensate his co-worker for all of his efforts in procuring a Wii for Nate. I actually don’t remember too much after this. I might have passed out.

But I’m thinking that it just may have been worth it: 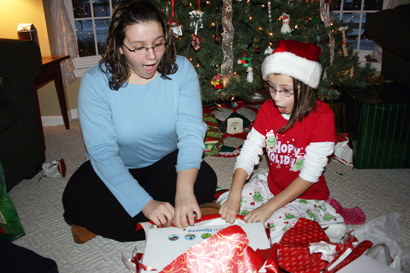 11 thoughts on “Weekend regurgitation: Not shopping at the mall”