Weekend regurgitation: Our banister has been lit for weeks! I’m thinking of calling it Lindsay Lohan. 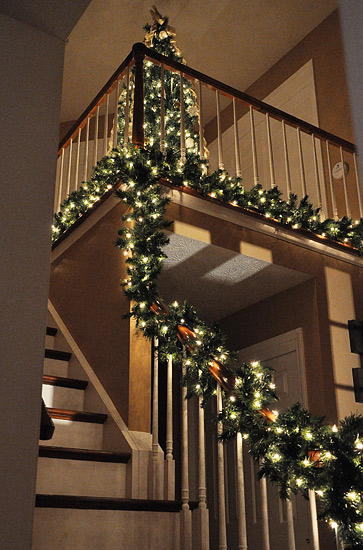 What happened last year didn’t happen this year which means (1) no one employed in the retail industry within a twenty mile radius of our house was threatened with partial disembowelment via an ice scraper; (2) Nate did not take out a home equity line of credit to pay for online shipping for one box of 100 ct. clear mini Christmas lights; and (3) our banister has been happily ensconced in lights from the get-go which, in Andy’s world, is that point in time occurring roughly the week before Thanksgiving.

Every year, there’s always one item that everyone scours the entire city for during the holidays, one item that starts off as an idea, becomes a challenge, morphs into a mission from God and ultimately evolves into I WILL EAT MY OWN YOUNG IF IT MEANS I WILL SOON POSSESS THIS THING.

This year, much to my astonishment and utter lack of enthusiasm, it’s a box of 100 count clear mini Christmas lights.

At least with Zhu Zhu pets, you can stand in line somewhere at 3:00 a.m., with 3,000 other lunatics and pitch your voices so high only dogs can hear you as you squeal AWWWW, THEY’RE SO CUTE! AND THEY DON’T EAT THEIR OWN POO. Although why you’d want to is beyond me.

Stand in line at 3:00 in the morning and squeal, that is, not eat your own poo. Although that is also so far beyond me, I can’t even see it from here.

But who wants to exert the energy to stand anywhere and squeal about 100 count clear mini Christmas lights? Before dawn, no less?

Just for the record, I’d stand in line and squeal for Anderson Cooper, no matter what time of the day it was.

I have gone to Target, Kmart, CVS, Rite Aid, Walgreens, Wegmans, Tops, Hobby Lobby, Joanns, Michaels, Kohls, BedBath&Beyond, Lowes and BJ’s in search of these lights. Not only does no one have them, no one can tell me when, or even if, they’re going to get any more. Not even when I tackle them and sit on their head, demanding an explanation.

I have a banister wrapped in garland. 75% of it looks beautiful, sprinkled with tiny white twinkling lights. The remaining 25%, which happens to be the 25% nearest you when you first enter our house, looks like a bad case of crab grass copped a squat all over it.

All we need is one more box of lights. One more box and my left eye can stop twitching and that vein can stop pulsating in my forehead and freaking my kids out.

If you follow me on Twitter, you know what I had to do to even get that garland on the banister in the first place, right? Because the banister is attached to our stairs and our stairs remain hideously ugly because they’re still undergoing massive reconstructive surgery and I am married to a man who believes that hanging anything pretty on anything ugly just serves to make the entire thing pretty ugly. There’s a joke in there somewhere but I can’t see it because my stupid eye is twitching.

I moaned and complained and persevered and offered Nate a sacrifice which could be described as just shy of ultimate, especially when you consider that it was in broad daylight when everything is still horribly visible, but I offered it up anyway during which I still moaned but for entirely different reasons and *wham bam thank you ma’am* – we had garland. And a very intentional pun. Except that the resulting garland wasn’t so much an instantaneous *wham* as it was a delayed response I like to describe as IF WE DON’T HAVE GARLAND ON THIS BANISTER SOON, ORNAMENTS AREN’T THE ONLY BALLS THAT WILL BE HANGING FROM OUR TREE.

It’s a sad day indeed when a quickie doesn’t hold its value. This economy just sucks.

It’s only December 8. If someone doesn’t cough up some 100 count clear mini Christmas tree lights pretty soon, these things are going to rise to the level of a Tickle Me Elmo, Cabbage Patch Doll, Furby, Wii or Zhu Zhu Pet as something for which people might just sell their soul. And when I say “people” I mean Nate. I never actually sold my soul for any of those things, nor was I ever inclined to because I like my soul a whole lot more than I like any of those items and, more to the point, I am a sane and rational human being, even when faced with a challenge. Nate, however? One Christmas, he sold his soul for a Wii. Three times. Oh yes he did.

Whoever is scarfing up all these lights in my area? You are quickly sucking the HO HO HO out of my Christmas. Just leave me one box. One lousy box that won’t wind up costing me more than my mortgage payment. Do you realize who I am married to? Another Christmas, Nate went online and paid $80 for a Chia Pet. Oh yes he did. If I don’t find these lights in my area soon, he is going to jump online to buy them and our charge card is going to need a defibrillator, as will I. I only hope the cardboard box we’ll be living in comes equipped with one of those suckers because otherwise, Nate will buy one of those too, in which case he might also want to add a new face into his cart to replace the one I’m going to rip off his body when all is said and done.

13 thoughts on “Weekend regurgitation: Our banister has been lit for weeks! I’m thinking of calling it Lindsay Lohan.”