Even though I did quite a bit of online shopping this past week and didn’t feel compelled to get up and leave my house at an ungodly holy shit o’clock on Black Friday, I did eventually leave it that day and did my fair share to boost the American economy in person. In fact, I boosted it all day. I liked boosting it so much, I pretty much did the same thing all day on Saturday. I’m very patriotic that way.

Surprisingly enough, I did not witness any brawls, trampling, gouging, pushing, shoving or smackdowns at the mall on Friday and the only budging I encountered was notable only for its absence. Specifically, the driver’s seat in the Durango stubbornly refused to budge forward and wouldn’t listen to me, no matter how loud I yelled at it. In fact, at one point, I was sorely tempted to swab under the Durango’s hood for a DNA sample and check to see if its gas cap resembled a belly button that might once have been connected to an umbilical cord that my womb grew when I wasn’t looking.

I wanted to take the Durango because I knew it could haul a good chunk of the economy in it but my 6’2″ husband had driven it last and the driver’s seat was pushed so far back from the steering wheel that it was almost crowning out the rear bumper and seeing as how I am 5’2″ with legs shorter than a basset hound’s, I couldn’t reach the pedals and pretty soon, I was running late to pick up my friend Heather and I was all sweaty and all frustrated and all HOW DO YOU EXPECT ME TO CELEBRATE JESUS’ BIRTHDAY IN TWENTY-EIGHT DAYS IF I CAN’T USE MY AFTERNOON DOORBUSTER COUPONS?

There are few places on this earth which make me hyperventilate and literally quiver with excitement at the mere thought of visiting:

Unless you want me to? Because I’ve got nothing to blog about this week so … maybe?

As for #4, I’m still working on it. Stupid restraining orders.

This past weekend, I visited #5. I adore Pier 1. Adore it. I’d move in there if I didn’t think my family would find me in less than thirty minutes and drag me away to make them dinner. How is it that they have an uncanny ability to hunt me down, no matter how far away I’ve run? I’m beginning to wonder if I came equipped with GPS. If and when I ever meet The Big Guy, this is definitely going to be included on my list of discussion topics called WHAT THE HELL WERE YOU THINKING, right after ultra low rise jeans, fat free cheese and Jon Gosselin. 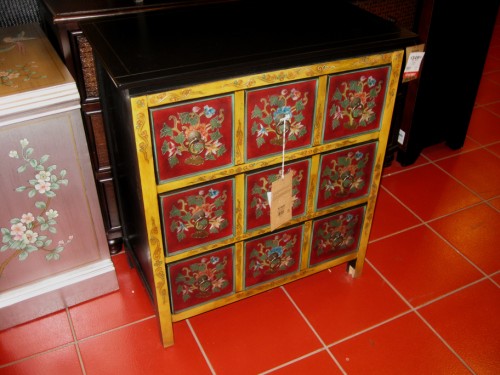 I’ve had my eye on this at Pier 1 for awhile now. I have no idea what I’d do with it. I just like it. It’s funky and colorful and different.

Come to think of it, those are the three criteria guaranteed to send Nate hurtling toward psychosis.

Not that that’s any incentive, mind you!

At least, not consciously. 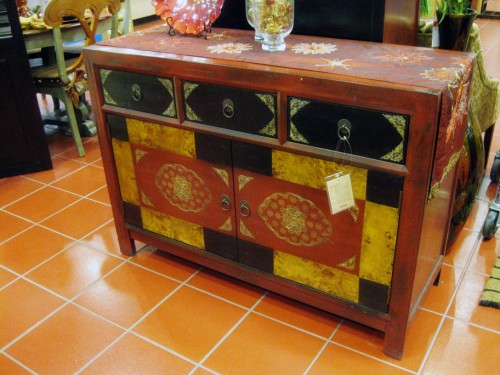 I like this one too, for pretty much the same reasons.

No one ever asks me. 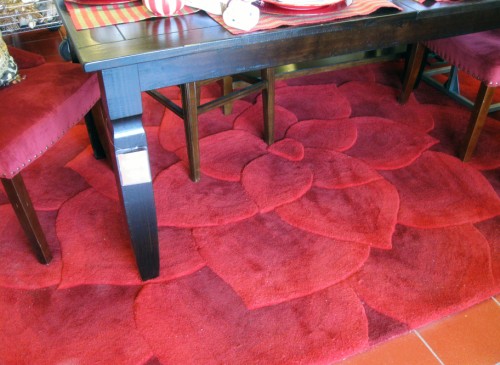 I’d like that one even better if it were sitting on this rug.  I can see both the dresser and this rug in my dining room. Quite clearly, in fact, because there’s nothing else in my dining room to obscure my view, like a table or chairs. But that’s OK because I’d be perfectly content to simply stand on this rug and admire that dresser without any additional distractions. Besides, if I had a table and chairs in there, people might sit down and actually expect me to feed them.

I’ve got enough of that nonsense going on in the kitchen. No need to let it spread to the rest of the house, like some hideous, infectious disease from which there is no recovery. 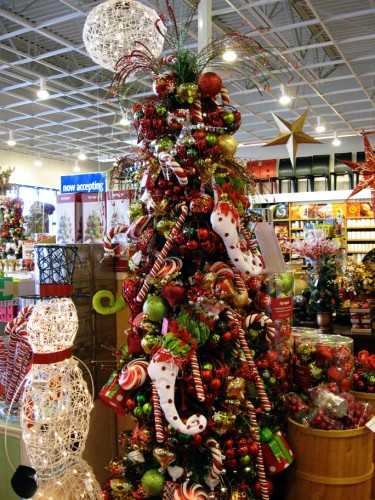 But what I LOVE LOVE LOVE the most about Pier 1 is their holiday decor!

Every year, I look forward to their Christmas trees. 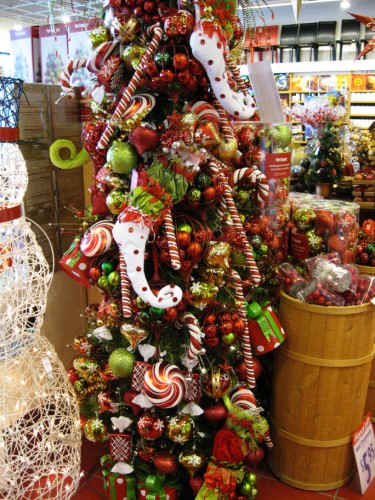 They are literally STUFFED with happy. 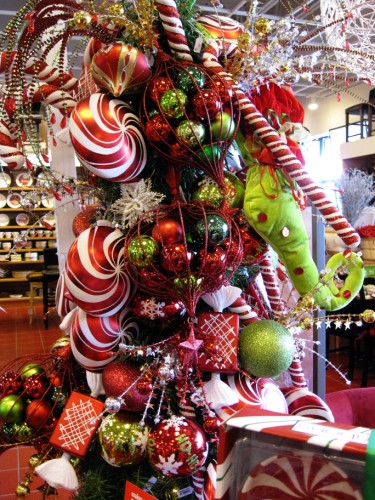 I love the man, but he’s in serious need of a Ho Ho Ho adjustment. 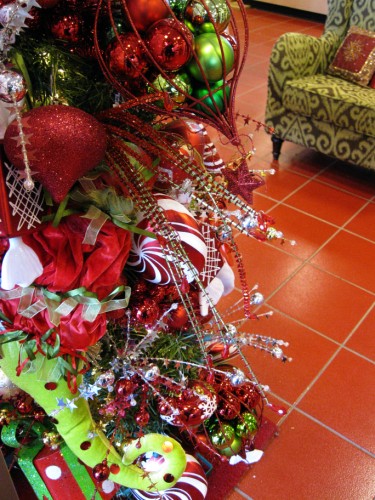 It’s the absolute excess of these trees that I love! The sheer overkill. The utter, enormous, exorbitant extravagance of them!

For the record, I’m all for unprotected sex between consenting hedonistic geographical regions.

And adjectives that start with vowels. 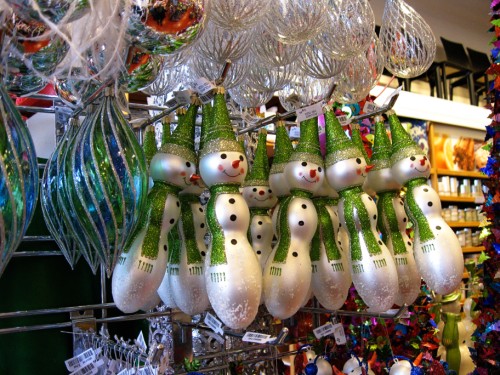 I want these ornaments. 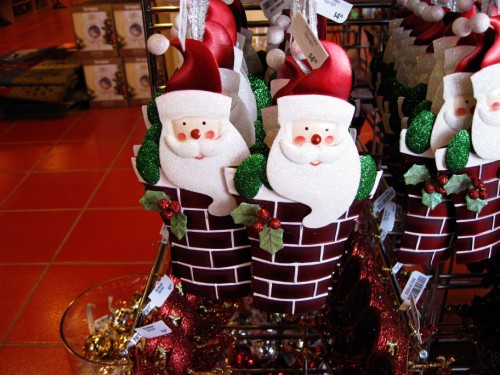 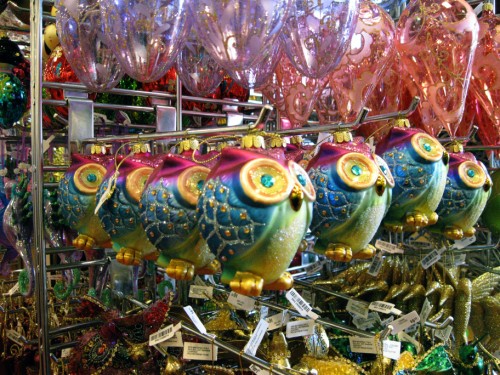 I’m on the fence with the owls, though. They don’t look very Christmas-y to me. Then again, I have a thing about owls. Did you know that my mom used to collect owls? And that I bought her this really pretty owl sculpture for her birthday one year, when I was young and had no taste? And that I caught her trying to sell it at a garage sale over fifteen years ago? And that for the past fifteen years, I’ve never let her forget that she tried to sell a symbol of my love for $1.00 or best offer?

I told this little story to the sales clerk and she looked at me funny and then backed away. Slowly.

Obviously, she has no idea what I went through. 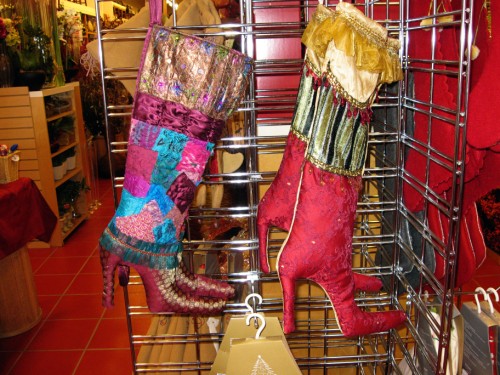 These high heeled stockings remind me of my younger, carefree days. Stick them on some shapely legs under a shorty short black leather mini skirt, take a picture and you’ve got yourself a photographic memoir of my ill spent youth.

I miss the eighties. 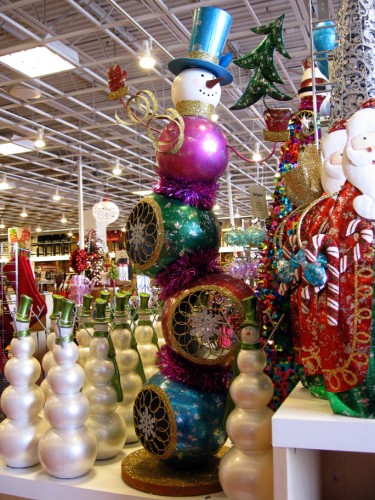 I love this guy. He reminds me of my vertebrae, only taller. And more festive.

And finally get his Ho Ho Ho adjustment after all.