Two things happened this weekend: (1) We picked out a bathroom vanity; and (2) I had a heart attack. Coincidentally, both of these occurred in the same store, almost simultaneously.

When did vanities get so damn expensive? And why don’t they come with defibrillators built in, for ignorant people like me whose existing vanities were born the same year as the sweats they’re currently wearing, circa 1982?

I leave you with a post I wrote last year about another heart attack I had albeit for an entirely different reason.

In recent weeks, we have spent several hundred dollars on our girls, getting them ready to go back to school.

There were haircuts and jeans and tops and shoes and binders and notebooks and a pink lunchbox for one and cell phone minutes for the other and blah blah OH MY GOD, SHAKE A JAR OF PENNIES AT IT AND MAKE IT STOP ALREADY blah.

When I think of how much money we’ve spent on these girls since their births, I’m rendered speechless. Except for those occasions when I’m asked for yet another $10 for a movie or $20 for a Nintendo DS game and I feel compelled to scream THIS ATM MACHINE IS OUT OF SERVICE! PLEASE CONTACT YOUR FINANCIAL INSTITUTION! HAVE A NICE DAY right before I run and hide in the dryer.

All of this to say, these girls are an investment of time and money and stretch marks. And lots of Xanax.

We went to Darien Lake last Friday which in and of itself is usually the financial equivalent of bankrolling AIG for the umpteenth time except that this past weekend, they were running a special deal where you paid a lump sum of $29.99 for as many people as you could stuff in your car. There was some fine print about it being limited to an adequate number of seat belts per car but does anyone ever read the fine print? Judging by the fifteen people exiting a cherry red Volkswagen Beetle in the parking lot, I think not.

So we’re in the park at Darien Lake and I’m going to just cut to the chase and tell you that (1) Nate is a risk taker and thinks a subscription to the New York State Lottery is an inalienable right under our Constitution; (2) I am not a risk taker, especially when it concerns investments. Hence, I wanted to cover both our hardwoods and our offspring with wall-to-wall bubble wrap for the first year after their installation; (3) Our youngest investment, Helena, is a risk taker, just like her dad, despite taking up residence in my womb for nine months; (4) Helena lived in my womb for nine months, not her dad. That would be icky; (5) Zoe, our oldest investment, has also inherited Nate’s affinity for risks, despite being born with a separate umbilical cord attached to gravity, thus explaining her other affinity for breaking her bones; and (6) Zoe is not biologically related to Nate, leading me to suspect she inherited this trait by osmosis or photosynthesis or telekinesis or geshundheit-iosis, otherwise known as standing next to him while he sneezed.

Why am I telling you this? Because not long after we entered the park, we walked by The Twister, which is a behemoth of a medieval torture device run by an employee who probably hopes to film projectile vomiting en masse and upload it to YouTube and score his own reality show.

Against my better judgment and pleas for rational thought, Nate voluntarily risked our oldest investment by accompanying her onto The Twister … 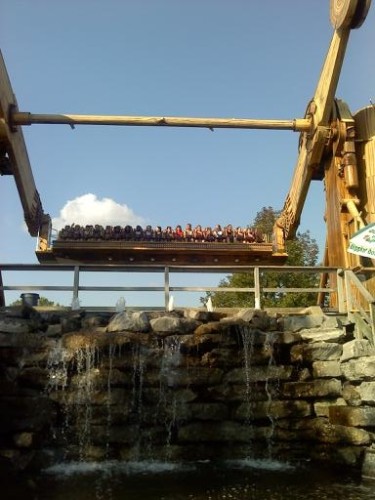 whereupon they were rocked … 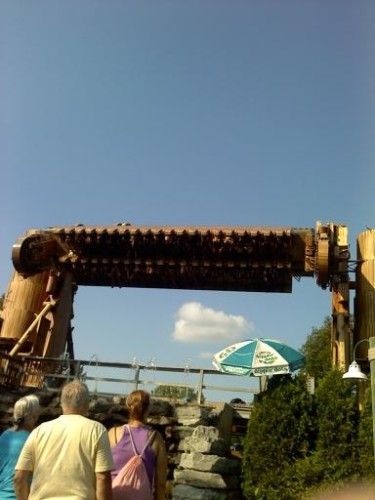 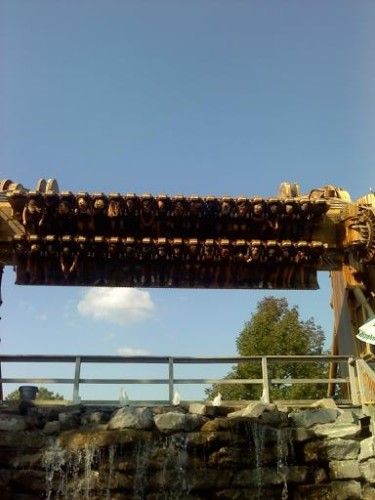 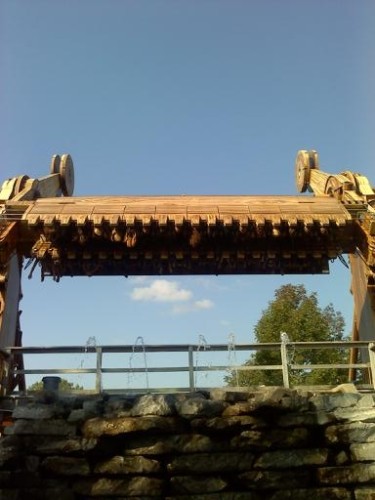 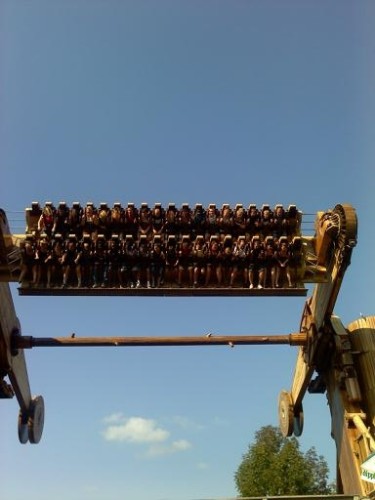 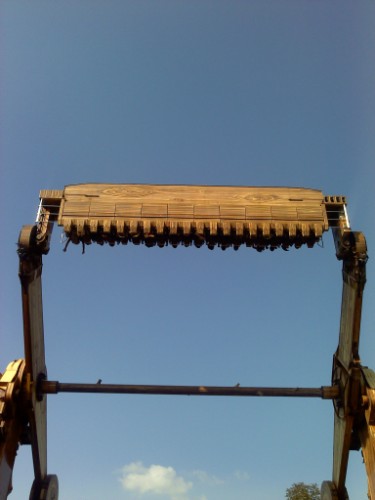 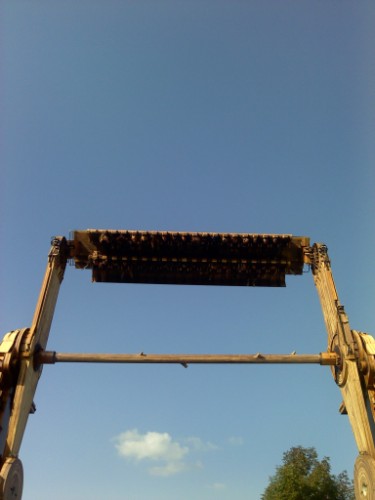 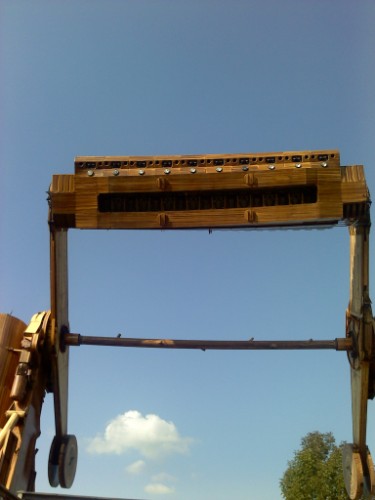 During this time, I kept myself occupied by racing around underneath them with my tote bag wide open in a desperate attempt to catch their vital organs before they splashed onto the pavement, all while my nine year old investment who was just this <> shy of the height requirement complained WHY CAN’T I RIDE IT, to which I promptly replied BECAUSE WE MIGHT NEED YOUR KIDNEYS.

Later in the day, Zoe said “Hey, I’m going to ride Superman” and before I even get to my response, I need to tell you that Superman a/k/a Ride of Steel a/k/a What Psychotic Maniacs Dream Up When They’re Off Their Meds is a three minute roller coaster ride whose biggest claim to fame is a 208 foot drop at a 70 degree angle at speeds exceeding 75 miles an hour. The G force is enough to rip the skin off your skull and transplant it onto your kid who won’t be born until 2014.

Eerily similar to our stock market a year ago.

So I was all “Hello? Have we met? You most certainly are not” and she was all “What? Why?” and I was all “Zoe, isn’t it enough that they’ve named the new emergency wing at the hospital in your honor?” and she was all “C’mon, Mom! You’re being ridiculous” and I was all “How are you going to get to college if you can’t graduate high school because you’re dead? Who’s going to take care of us when we’re old and decrepit if you’re in a coma? How will Helena afford that swanky assisted living place I’ve had my eye on all these years, all by herself? Isn’t it enough you’ve left me with one wicked c-section scar which, I might add, was earned only after sixty hours of labor? Now you’re going to leave me rotting at Hole in the Wall Nursing Home? Swankless? How can you be so selfish?”

Whereupon she proceeded to ignore me and went to stand in line for Superman, right next to Nate.

And so my forty year old sole financial provider and my fifteen year old financial investment rode Superman while I sat on a bench and mentally calculated Helena’s earning potential as well as how much money we’d have left in our savings after paying for a quadruple lung transplant.

Three minutes later, I exhaled when Zoe came running toward me with her face just beaming, shouting that she had held her arms up the entire ride.

Then I watched Nate wobble very slowly in my general direction. When he finally arrived in front of me, I asked him how he felt and he shouted I DON’T WANT TO ALARM YOU, BUT THE BRITISH ARE COMING AND WE BETTER BUY SOME SOUP. And then he asked me if his face went to live in Heaven.

Before I knew it, Zoe was running to stand in line again, with Helena running along right behind her.

And I took a running leap and pounced on my nine year old, gripping her by the ankles and yelling NO NO NO, YOU DON’T and she squirmed and cried PLEEEEEEEEEEEEEEEEEEEASE and I simply looked at the ride attendant who was standing there next to the height requirement with his thumb up his ass. I smiled and winked and blinked and raised my eyebrows and shook my head and waved my hands at him, trying to subtly communicate that he should play the bad guy and deny her admittance to the ride but apparently, my body language was lost in translation because not only did he let her through, he asked me if I was having a seizure and did I need medical assistance? And I sighed and I told him that yes, as a matter of fact, I was fully intending on having a stroke in approximately ten minutes so I would appreciate it if he would be so kind as to have a defibrillator handy and an ambulance ready and waiting and to please keep his thumbs visible at all times, thankyouverymuch.

And then, as I kept Nate company while he tried to remember his name, I watched as our two financial investments boarded Superman. 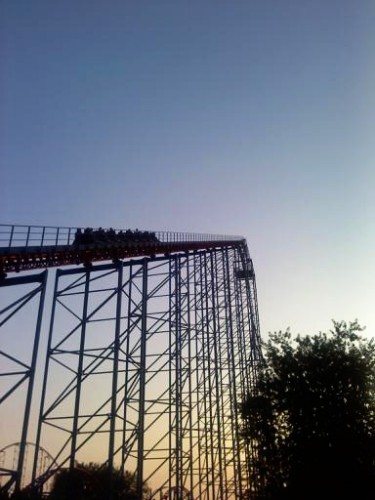 At about here, I threw up a little in my mouth. I might have peed my pants a bit, not because my dream of swanky assisted living forty years down the road was becoming pipe-ish, although that was part of it, but mostly because it was entirely possible that the fruit of my loins were about to be blended into a smoothie before my very eyes. 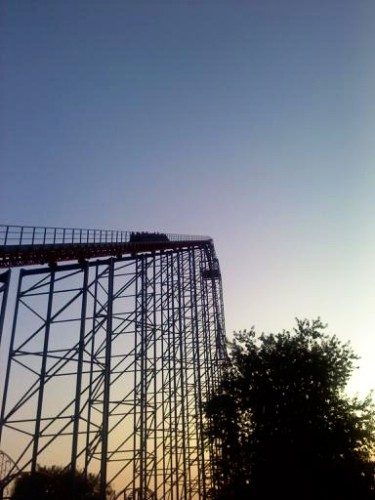 I spontaneously became eighty years old right here. Just so you know, there is nothing past that highest point. Nothing, save for the almost vertical drop at warp speed.

I don’t have photos of the rest of it because it would have meant me running clear across the park to the other side and it’s kind of hard to run when you’re an octogenarian in the middle of a myocardial infarction.

In the end, my fruit remained blissfully unscathed and are currently enjoying their first day back at school, increasing their earning potential and thereby helping me realize my dream of swankified geriatric living.

Nate stopped mumbling in gibberish and is back to work with a Hello, My Name is Nate sticker on his shirt, just in case he has a flashback.

And I am busy wallpapering my brain with bubble wrap.