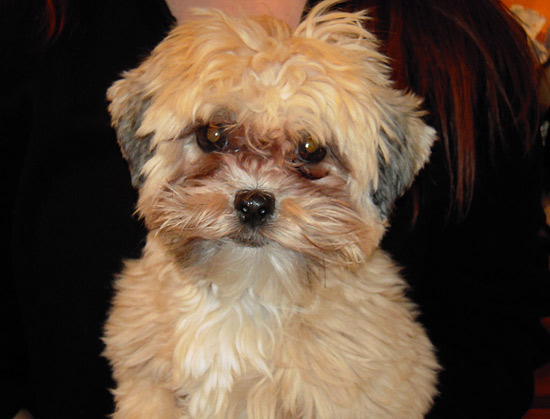 We brought Oliver home to live with us when he was eight weeks old which was almost exactly one year ago today. Our lives have never been the same. Nor have our carpets.

I did not know how much I could adore an animal until we got Ollie. I had never considered myself a dog person and even today, dog slobber still makes my skin crawl right off my body and hide under the sink. I thought I’d simply be tolerating a dog for the kids’ sake but holy flippin’ jeebers, I love this little guy. It’s just the two of us together five days out of seven and he spends his time sleeping on my lap or on my feet or following me all around the house, so much so that I have to be careful not to stop in mid-stride lest he bonk his nose on my ankle.

Unfortunately, he has developed a Pavlovian response to couches in that, when he sees one, he automatically poops behind it. Just yesterday, while on one of my routine couch checks, I was all SHIT SHIT SHIT! Somebody get me some tiger blood, Adonis DNA and the drug called Charlie Sheen. YOU’RE GOING TO KICK THIS HABIT, OLIVER, AND BE A WINNER. No ifs, ands or buts about it. Everything after “but” is dial tone anyway.

And Oliver was all Would you mind sitting down while you’re having a psychotic break? I need a lap. I’m exhausted.

I leave you with the post I wrote soon after we brought Ollie home, about my first impressions on raising a puppy.

First impressions on raising a puppy 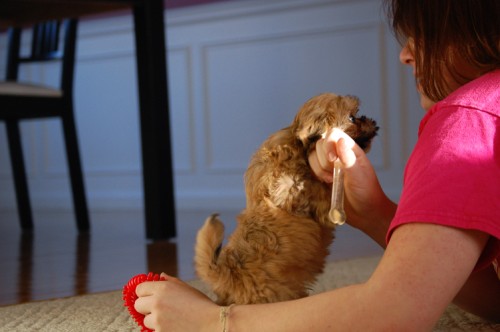 What in God’s name was I smoking when I agreed to this?

Having a puppy is almost like having a newborn baby, except that my boobs are not engorged and I can’t shoot my uterus across the room by sneezing.

A newborn baby is easier than a puppy because newborn babies come with diapers.

Puppy diapers are truly an excellent idea. Someone go invent them. Thank you.

I’m worried people are going to think I shrunk a real dog in the dryer.

You can turn a tiny, happy puppy into a furious, demented hyena simply by placing him in a crate.

If you’d prefer a screeching, rabid, pissed-off, psychotic hyena instead, one who acts as if his testicles are being french braided and then pureed in a Cuisinart, place that tiny, happy puppy in a crate and then walk out of the room.

I will never take another shower in peace and quiet.

I don’t remember what peace and quiet sounds like.

There is something to be said for unconditional love that doesn’t come equipped with an I HAVE NOTHING TO WEAR! WHEN ARE YOU GOING TO DO LAUNDRY? OH MY GOD, I CAN’T WEAR THIS! MY LIFE SUCKS gene.

I thought I’d never meet another mammal who could produce ten times its weight in pee within a 24 hour period without benefit of a raging bladder infection.

Puppies are softer than clouds.

My carpet is scared.

I now know what it feels like to have my own personal stalker.

I did not think it was possible to love any living thing like I do my own kids. 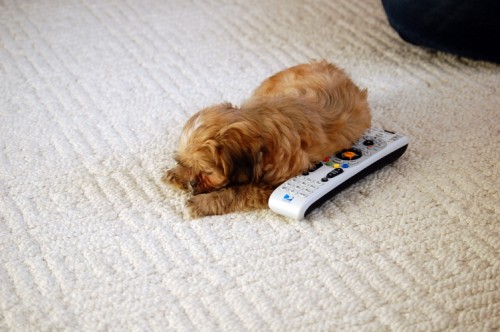