Weekend regurgitation: Why doesn’t the Nikon D90 come equipped with talent? I’d have paid extra for that.

Even though I still have no idea what 82.5% of the buttons on my camera actually do other than mock me, I am loving my class and I can’t wait for this coming week because we’re going on our first field trip which is to a local cemetery. I’m pretty excited because really, could I ask for a more non-judgemental audience? No one’s going to care that I’m overexposing or underexposing because they’re too busy being dead and trying to get into Heaven. And maybe they’ll even get there quicker by doing one last good deed, like correcting my white balance or making the earth less blurry or something.

I leave you with a post I wrote last year when I was pining away for my beloved Nikon D90. Now that I own one, I am pining away for the knowledge to use it without bleeding from gaping head wounds.

Excuse me, Aladdin? Mind if I rub your lamp?

Do you remember my Canon XTi, the DSLR camera that got its jollies by sucking my will to live on a daily basis? The one that hated my guts and proved it every single day by taking soft and blurry photos because it got its kicks out of screwing with my head? The one I affectionately called DSLRTCALOM, short for Damn Stupid Little Ratshit That Costs A Lot Of Money?

I sold it a couple of months ago on Craigslist to a very nice young man, one of the very few who didn’t email me profoundly stupid questions like Does it need a leash? and Does it come with a leather sofa? and, one of my favorites, Can I put mustard and ketchup on it?

And best of all, when he came to pick it up, he did not ask me point blank Will you ship it to me when I get back to my house? But wait five minutes because there’s rush hour traffic.

What is it about Craigslist that brings out the unfathomably stupid in people?

Anyway, I sold it and I’ve been DSLR-less since. I do have my point and shoot and it’s fine and fits in my purse or in Nate’s pocket on those occasions when I ask him to carry it for me because I don’t want to carry a purse. These would be the same occasions when he finds it necessary to roll his eyeballs at me and I find it necessary to tackle him and bellow ISN’T IT ENOUGH I CARRIED YOUR CHILD? IT’S NOT LIKE I’M ASKING YOU TO CARRY A HUMAN ON TOP OF YOUR BLADDER FOR NINE MONTHS AND THEN SHOOT IT THROUGH YOUR PENIS.

This is the Nikon D90, my dream camera. 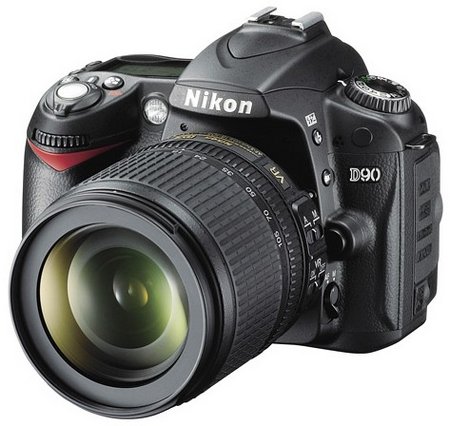 My own personal nirvana. My little slice of Heaven, smothered in Nutella and Bavarian cream and sitting on a fried donut.

And before anyone asks, NO NO DAMMIT NO. I am not a spokesperson for Nikon. Wouldn’t that be nice? But alas, I am but a pimple upon the fanny of the speck of molecular dust wiped off one of their über cool lenses.

If I was their spokesperson, I would already own one of these babies and then this entire post would be moot and then I’d have to come up with something totally different to blog about today and who’s got time for that nonsense? So I’d probably get all stressed out about it which would bring on either a cold sore or a bladder infection or both, inciting me to physical violence whereupon I would rip out my own uterus and fling it out the window, sprinkling bacterial laden neon orange pee on everything in its wake.

With my luck, I’d be cited for littering and public urination. Not to mention sued for malpractice for performing a hysterectomy without a medical license.

I’ve been trying to save my pennies to buy my baby which I’ve decided to call Mecca but as it turns out, it’s hard to buy Mecca when you’ve got to feed and clothe and educate two young human beings who sprang from your womb and sort of look like you but mostly look like their respective fathers and speaking of which, once I could understand, but twice? I do all the work, earning 40 extra pounds, a second chin and 152 glistening stretch marks and they get their fathers’ strong jaws and nice height but my astigmatism? What’s up with that?

It’s a slow go, trying to save up the money. And when I say slow, I pretty much mean at the speed of stop. So I’ve brainstormed a list of alternative methods to raise the money necessary to buy Mecca before it becomes obsolete or before I do, when I’m too old to remember what it’s for and I call it Fitz because it looks like someone I never knew and then someone steals it from my room at the Older Than the Hills Nursing Home, along with my teeth and my stash of People magazines.

Here’s what I’ve come up with so far:

Any other suggestions? Because I really really want this camera and I’m getting desperate and knocking off Nate and collecting insurance money is looking tempting, if it weren’t for the fact that I’ll never figure out how he programmed the DVR and I don’t speak thermostat. I’m getting quite frustrated so don’t be surprised if you see a short, round, busty, bespectacled middle-aged woman standing in the middle of a busy intersection wearing nothing but a five day o’clock shadow on her legs, shrieking WHO THE HELL DO I HAVE TO NOT SLEEP WITH TO GET TO MECCA?

Just cut her some slack, OK?

7 thoughts on “Weekend regurgitation: Why doesn’t the Nikon D90 come equipped with talent? I’d have paid extra for that.”