When I die, my tombstone will have ARE YOU SURE engraved on it

One of the best things about losing 45 pounds and reaching goal weight is the opportunity to run out and buy a brand new wardrobe. Or so I’ve heard. I wouldn’t actually know because I have yet to do just that which explains why I’m writing this while decked out in my trusty, pilled, faded, stretched-out, aqua-colored sweats, circa 1989. They make me feel skinny every time the crotch hangs down by my ankles and they coordinate with my purple, ripped, frayed Prince and the Revolution t-shirt perfectly.

For all of you silently breathing a huge sigh of relief that I haven’t yet learned how to vlog … you’re welcome.

I’m not sure what is preventing me from buying a new wardrobe. Other than our bank account, I mean. Maybe it’s because I am woefully indecisive. Maybe it’s some sort of subconscious flashback to when I was heavier and I’d try on clothes and leave a trail of tears across dressing rooms throughout western New York. Or maybe it’s because I suffer from a medical condition where anytime I have to spend money on myself, my hands turn into cold, dead things from which money has to be pried with a bionic crowbar. I’m not sure if there’s an official JAMA term for this affliction which compels me to spend hours deciding on whether or not to fork over the money for something only to return it to the store the next day but I’m going to go with Ying Yang: Ying being my inability to make a quick retail-related decision and Yang being my husband’s ability to drop $25 on a miniature Buffalo Bills jersey for our seven pound shihpoo without a second thought.

Marriage is all about balance, is it not?

While I have not replaced my entire wardrobe, I have managed to pick up a few things here and there. 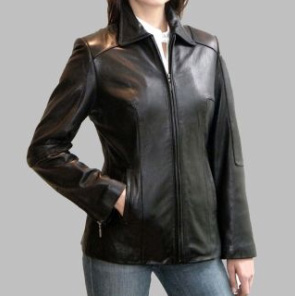 I picked up this leather jacket at Marshalls. It was on clearance and it fit perfectly. But really, it was such a steal that even if it hadn’t fit like a glove, even if the armpits served as tourniquets and caused my arms to whither from blood loss and I wound up cutting them off with my ignition key in housewares and leaving them on a shelf with some mismatched dinnerware, I’d have been crazy not to buy it.  But that didn’t stop me from hemming and hawing and analyzing and paralyzing and then texting Zoe who was shopping with me for her opinion. And by shopping with me, I mean that she was clear across the store, pretending she was not shopping with me lest she saw anyone she knew.

She texted me back from the shoe department and told me it looked great. I texted Are you sure? And she texted me Yes! and then asked why I insisted on spelling out every word and using punctuation in my texts. I then texted Stp Try N On Who Chi Shoz Cuz UR Not ByIn Thm Is Ths BetR. She texted back with ??? So I texted Stop trying on hootchie shoes because you’re not buying them. Is this better?

She didn’t text me back and I can only assume her battery died.

Then I texted Nate a photo of me wearing the jacket and asked his thoughts. I did this twenty times as I didn’t believe his first nineteen responses of YES BUY IT because it’s hard to trust the opinion of a man who recently thought it was a good idea to spend $140 on a supersonic juicer for a family who doesn’t drink juice.

I can only assume his battery died as well.

So I bought the jacket. It was exhausting.

I bought these boots at Kohls. They were on sale and I didn’t even have to ask for anyone’s opinion before buying them! I just wanted to.

I’m not sure what’s going on with me lately but I am really liking the whole black leather/biker look. Nate even asked me what was up with my quasi bondage predilection and I was all I’m kind of feeling a little Leather Tuscadero-ish and he was all Want me to grease my hair back and buy a black leather jacket and boots and motorcycle? Heeeeeeyyyyyyy and then he gave me a double thumbs up and tried to seduce me, which is actually kind of hard to do with your thumbs stuck up in the air. And then I was all HEY FONZIE, I DON’T SLEEP WITH MY SISTER’S BOYFRIEND. WHAT KIND OF SKANK DO YOU THINK I AM? And then his thumbs went flaccid. The end.

If you had asked me a year ago if I would ever buy boots with metal studs on them made by a manufacturer called Candies and pair them with some *gasp* skinny jeans and a leather jacket, I would have laughed in your face and then taken your temperature. Rectally, if I was really worried about you. Or you pissed me off. 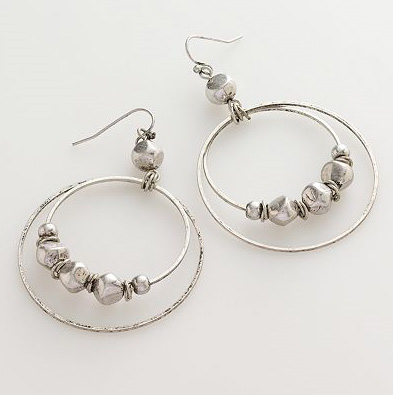 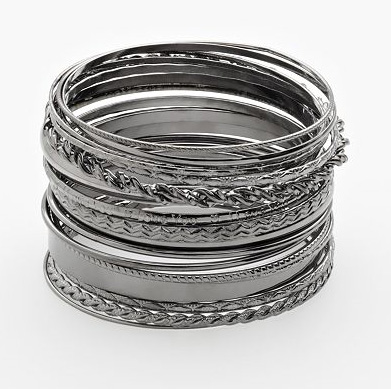 Lately, I’ve been buying a little jewelry. These earrings and bracelets also came from Kohls and this time, I really didn’t ask for anyone’s opinion! I may have demanded it, but I certainly didn’t ask for it. There’s a difference. It’s subtle, but it’s there.

Accessories are something new for me and I think it has everything to do with feeling more comfortable in my skin. Aside from the occasional Harry Mason indulgence, I had all but avoided wearing anything that might sparkle and attract attention before I lost my weight. Nowadays, I’m actually liking a little bit of bling!

Who knows? Next Halloween, I might even dress up as Las Vegas. 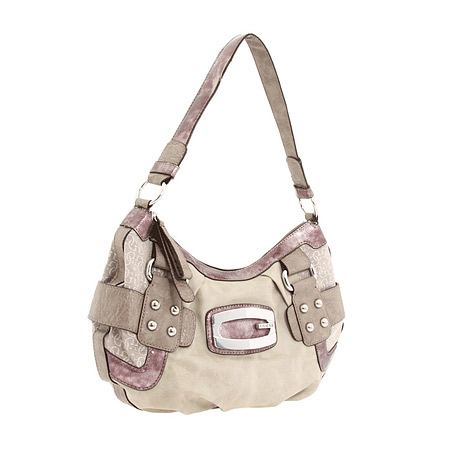 I just bought this Guess purse at Macy’s on Monday, partly because I’ve always lusted after a Guess purse and partly because every single cheapie purse I’ve bought in the last fifteen years has a tendency to break and/or fall apart at the most inopportune moments, like in the middle of the mall on Black Friday when I’m already earning a hernia from carrying ten heavy shopping bags in my hands and don’t have enough fingers, armpits or wherewithal to hold on to a purse that won’t stay on my shoulders and I’m SO OVER IT, GIVE ME A COOKIE ALREADY.

While I actually love this color combination, the purse I bought is black. Shocking, I know. It was on sale and with the coupon from that day’s paper, I got it for $60, including tax, which meant I did not have to fall into anaphylactic sticker shock or use the epi pen I had brought with me, just in case.

And bonus! It only took one saleswoman to convince me it was a good deal! OK, two. But technically, I didn’t ask for the second woman’s opinion. She just offered it of her own free will. Right after she ran over to us and used her master key to turn off the deafening alarm that the first saleswoman had inadvertently tripped when she used the wrong key to unlock the purse from its display case. But I think her loud declaration of HERE YOU GO! IT LOOKS BEAUTIFUL ON YOU! YOU SHOULD BUY IT RIGHT NOW AND TAKE IT HOME IMMEDIATELY was sincere and had nothing at all to do with the fact that her ears were bleeding and she was looking at her keys as if they had bloody, rabid fangs.

This is my very first bonafide designer bag and I feel like such a grown-up!

Now I just need a wallet. I’ll have to schedule a time to go shopping when (1) there will be an appropriate number of fellow shoppers who can reassure me a suitable number of times that the black leather Guess wallet I’m mulling over, the one that is also on sale and coordinates perfectly with my purse, is indeed an excellent choice; and (2) Zoe’s and Nate’s cell phones are fully charged.

12 thoughts on “When I die, my tombstone will have ARE YOU SURE engraved on it”