When I was young, we didn’t have cell phones! We had to tie strings onto cans …

I find it highly ironic that I live in a house in which 75% of the inhabitants actually enjoy science, and of that 75%, I willingly married 33.3% of it and gave birth to the remaining 66.6% with my own science-hating loins.

I liked math, if you couldn’t tell. At least I did until I took calculus and discovered that somebody replaced most of the numbers with letters. I hope he got into a lot of trouble, whoever he was.

I like my numbers and letters kept separate. My world makes much more sense that way.

Science was never my thing and really, the only memory I have of any science class is one from high school, when Doug Nubert got into trouble for goofing off and was hauled up to the front of the class where he was instructed to draw the external reproductive organs of a human male on the chalkboard.

So, I don’t do science. When the science fair comes around in these here parts and Helena excitedly jumps up and down and all around, Nate’s the one on call. He loves the stuff. He probably got his affinity for science from his father, who was a high school teacher of the subject for many, many years.

I don’t think my father-in-law made his students draw self-portraits of their nether regions, though. At least, I hope not. I’m not going to ask him. Some things I’m better off not knowing.

I bet I’d be excellent at all of those things too, if I knew how to do any of them.

I am excellent at giving Helena free reign as she writes out her predictions in handwriting that gradually slants to the right, all the way down to South America, while I cringe, bite my tongue until it bleeds and staple my eyelids shut. I have mastered those skills to an art form. We all have our strengths.

Zoe participated in the science fair only once with a project on dry ice. She was in fifth grade so the slanted handwriting wasn’t an issue and I didn’t cause myself any bodily harm but Nate did have to use one of his kidneys as collateral when purchasing the dry ice. Then we had to jump through 37½ hoops and pledge Nate’s other kidney to meet the requirements for bringing the ice onto school grounds.

I thought it went well. Then again, I still wear sweats from the eighties, so there you go.

Did you know that when you fill a test tube with dry ice and place a balloon over it, the balloon expands?

And did you know that while people are otherwise distracted by a hands-on exhibit of dry ice and water and swirling smoke, they couldn’t care less about a balloon on a test tube?

And did you know that the balloon doesn’t care if anyone is paying it any attention?

And sooner or later, it explodes with a *BOOM* that echoes through a gymnasium like a bomb?

Isn’t it amazing what you learn at a science fair?

Poor Nate. He really did like his kidneys. Dialysis? Not so much.

But at least we can say we were trend setters, albeit for a brief period.

Helena has participated in the science fair for three years now and this year, she partnered with her friend Gianna and presented the Tin Can Telephone Project. Helena ate Italian wedding meatball soup every day for almost a week in order to get three pairs of cans for her project.

One set was connected by twine, one by string and one by fishing line.

Turns out, the cans connected by string worked the best, so long as the string was pulled tight. Don’t ask me why. It has something to do with sound waves and vibrating can bottoms.

The last sentence is why I’m not in charge of science fair projects.

Plus, I didn’t feel like pulling out flowcharts and subtitles and my Dictionary of Nate Speak. 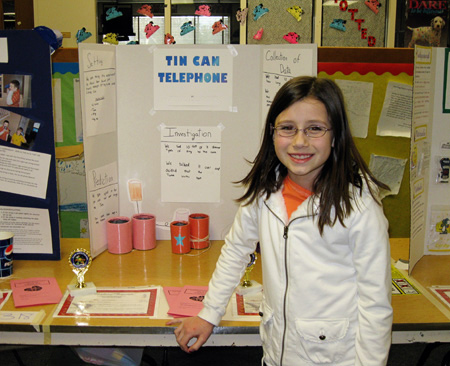 Here’s Helena in front of their display. I’d show you a picture of Gianna but I didn’t get her mom’s permission because I didn’t know I was going to write this post until ten minutes ago.

Isn’t she cute? Helena, I mean. Giana is adorable too and if I was better at time management, you wouldn’t just have to take my word for it.

Even when she’s 82 and shuffling along in her walker, she’ll always be my little peanut.

Helena, I mean. Not Gianna.

You can’t see it in this picture, but immediately to her right is a display on … get this … tin can telephones. By boys.

Two projects on tin can telephones right next to each other.

Now, if Doug Nubert’s self-portrait had sparked anything other than disbelief and a slight case of HOLY CRAP, WHAT THE HELL IS THAT in me, I might have been intrigued by the very concept of science. Or pornography. Or really gross anatomy. But we don’t have time for a random tangent on either of those subjects so I’ll just stick to science, OK?

Maybe I’d have grown to actually like science, enough to volunteer to head up a science fair committee at my kids’ school twenty five years later. Then there would have been no possibility of having identical projects in such close proximity to each other because that scenario would have set off all of my anal-retentive, quasi semi-compulsive alarms and made my skeleton jump out of my skin and run shrieking out the front door. You can’t have a science fair if the committee chairperson is but a pile of dermis in the school foyer. See Board of Education By Laws, §102-A.

No science fair means no identical projects in the same vicinity. Problem solved.

But Doug’s multi-colored chalk rendering of Ode to All Things Genitalia did not spark anything in me other than a decidedly strong aversion to Doug. Therefore, I did not volunteer to head up any science fair committee twenty-five years later and thus, Helena’s and Gianna’s tin can telephones came to share the same third grade hallway real estate as those of Colin and Jason.

But Helena and Gianna didn’t let it bother them. For a couple of minutes, it became a friendly competition between the girls and boys as to who could get the most spectators to try out their phones. Then they realized that they were actually speaking to each other and there were witnesses. So they immediately proceeded to ignore each other, stopping every so often to talk smack about the others’ cans.

Not really. I just wanted to say “talk smack.” I like that phrase. Makes me feel … not 42.

So anyway, the girls just rolled with it and didn’t let the fact that the cooties immediately to their right were stealing a bit of their thunder and I think that’s because:

I have to admit that while science makes my eyeballs roll up into my brain, I’m grateful that my kids enjoy it. I’d love to see them grow up and use what they’ve learned to better the world somehow.

In the meantime, I’m fedexing 1/2 of a tin can telephone unit to my mother. Hopefully I’ll never again have to hear I CALLED YOU ON YOUR CELL PHONE. WHY ARE YOU ANSWERING ON YOUR LANDLINE?

22 thoughts on “When I was young, we didn’t have cell phones! We had to tie strings onto cans …”