If we’re going to kill germs for Christmas, let’s at least do it in an attractive manner, shall we? 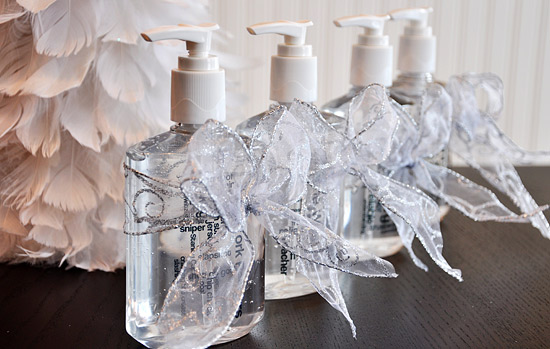 I woke up crafty the other day and I’m here to tell you that waking up crafty is like a gift from God, kind of like waking up with the ability to do fifth grade math without a calculator. You just feel smart. And sort of skinny. It’s just a nicer way to start the day than waking up, say, feeling bloated and stupid.

I immediately decided to work on Christmas presents for Helena’s teachers because that is what I do every time I wake up crafty during the second week of December. This involves me agonizing, fretting, worrying and biting my cuticles until they bleed. That’s what I do with gifts from God – I go all Twilight on them and suck out all of their fun and joy, leaving their withered, rotting carcasses in my wake.

What do you do with gifts from God?

I followed this tutorial from The Idea Room and can I just say how much I love that site?

I love that site!

Don’t you hate it when people ask if they they can do something and by asking, they’ve already done the very something they’re asking to do?

I think I’ve posed that question before. But that’s OK. I probably didn’t listen to your answers. 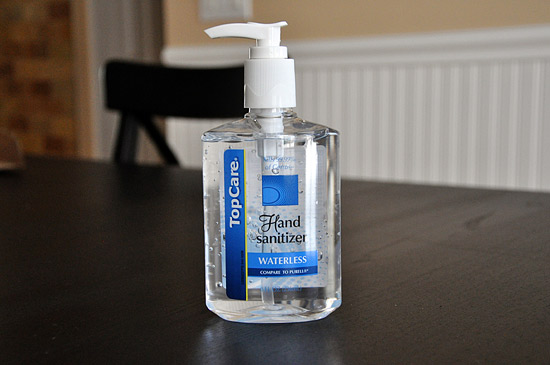 This is what I started with. I bought four of these at Wegmans for $1.25 each. I did this three different times.

By the way, Wegmans is now selling these for $0.88 a piece. OF COURSE THEY ARE. I should hire myself out to do Christmas shopping for people. Just think about it. If I do all the shopping for you, I can pretty much guarantee that you will get the best price in the history of ever because everything I buy on sale will go on an even bigger sale two days later. All you have to do is grab your receipts, get your price adjustments and *bam* you’ve saved yourself a boatload of time, a wad of cash and a possible herniated spine from body slamming little old people to the floor so you could score the last Snuggie in the tri-state area.

On second thought, maybe I should just hire myself out to think up more awesome ways to get rich.

The front label came off easily but the back label was apparently affixed with supersonic cement. Amy’s tutorial mentioned Goo Gone so I ran right out to Lowes and bought some and it worked like a charm. Oh, and Lowes? Why must you put this stuff up high on the shelf? Hello? Are only tall people allowed to wrestle with sticky residue? I think not. So I don’t want to hear any flak about the clean up in aisle two because if you had placed this stuff at a reasonable height, I wouldn’t have had to stack tubs of joint compound on top of each other to reach it. Just an FYI.

I took the front label from this bottle, stuck it onto a blank sheet of paper, trimmed around it with some scissors and got myself a template to use for my new label.

Rather than using a monogram design on my bottles like the tutorial, I opted to use some word collages that I created at wordle.net and can I say how much I love that site?

I love that site!

On the wordle.net homepage, click on “Create” and enter all the text you want to use in your wordle and then click “go.” Use the “~” symbol between any words that you want to keep together. You can control the size of specific words by how many times you use them. The more often you use a certain word, the bigger that word will appear in relation to the other words in your wordle. Oh, and here’s a helpful hint. Save your list of words in a separate word document. That way, if you’re not happy with your wordle, you can edit your words as you please and then simply copy/paste them back into the wordle.net site. Beats having to re-type all your words from scratch. Over and over and over. And over. This will save you so much time, not to mention your larynx which can be severely strained by screaming SHIT SHIT SHIT ON A STICK too many times in a ten minute period.

I obviously have too much time on my hands. Maybe I should spritz a little Goo Gone on them. 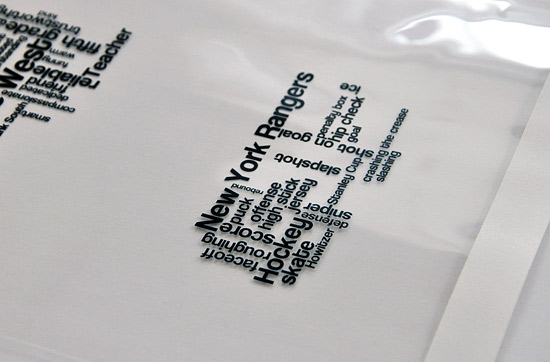 Here’s one of the wordles I created. See how “New York Rangers ” is bigger than “hockey” which is bigger than “slapshot?” That’s because I entered “New~York~Rangers” into my wordle six times,” hockey” five times and “slapshot” four. I chose a white background with a black font and four hours later, when I was finally happy with the configuration, I clicked “print” and saved it as a pdf file which I then brought into Photoshop and scaled down to fit my template. After I did this with all of my wordles , I copied and pasted all four of them into one blank 8.5 x 11 document, saved it as a jpg, burned it to a CD and then took it into my local Staples for printing onto a transparency with a laser printer.

Gosh, I’m out of breath from typing all of that. But trust me, it sounds a lot harder than it actually was. And I don’t say that lightly. I’m all about exaggerating how hard I work around here. It’s one of the ways I make myself sound important.

For the record, I am not a hockey aficionado or a fan of the New York Rangers. However, one of Helena’s teachers is. I’ve only seen one hockey game in my life and that was back in college and I watched it only because I was trying to impress a guy. I tried impressing until my fanny turned into an ice sculpture and then I focused my efforts into rubbing my bottom with my hands to get the blood flow circulating. I actually wound up impressing the guy but for all the wrong reasons.

I used scissors to cut around my wordle and then I rolled it up backwards so that the text was still facing frontwards (does that make sense?) and then gently pushed it into the bottle of sanitizer. It was a little tricky trying to maneuver the label against the front of the bottle without getting weird air bubbles and I’d be lying if I said that those air bubbles did not wreak havoc with Harry and his crew. But Zoe helped me smoosh them out (the air bubbles, not Harry and the gang) using her fingers and the meat thermometer that I had grabbed to stab myself in the eye and then she gave me a plastic bag to breathe into, shoved some Xanax down my throat, rubbed my back and told me I was pretty.

Thank God I have responsible kids. 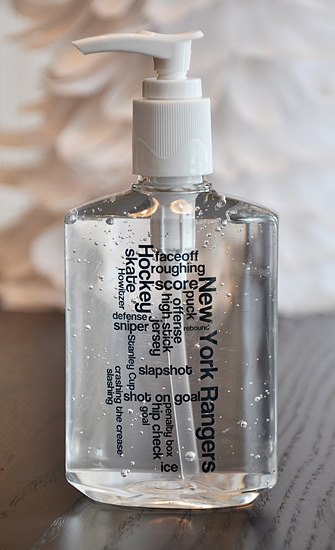 Here’s the finished bottle! The other three I made have wordles with Helena’s teachers’ names on them so I thought it best not to post them in the interest of privacy. I may air our dirty laundry in public but I do have some boundaries. Sometimes they’re far away and you have to squint to see them but they’re there.

Do I even have to get into how tedious it was to tie these bows so that they were all perky and uniform?

I didn’t think so. Suffice it to say that glitter and tears were flying and Oliver ate sparkly wet dog food that night.

I love the way these turned out. I think they make great teacher gifts and now I wish I homeschooled my kids so that I could give one to myself.

Go check out the tutorial from The Idea Room and if you’ve got any questions about my take on it, let me know and I’ll try to answer them as best I can!

21 thoughts on “If we’re going to kill germs for Christmas, let’s at least do it in an attractive manner, shall we?”