STUFF I LOVE: My Brighton watch. It’s pretty and it covers up the spot where aliens branded me

Remember when I was going to go all blogstar on you and show some initiative by writing an ongoing series called Stuff I Love? Where I was going to periodically post about things I adore, things that I neither gave birth to nor married? And I was going to compile the posts into one ginormous collection that could be searched and cross referenced at will? And it was going to be the very definition of AWESOME?

I wrote one post about aliens and another about epiphanies and then suddenly the laundry piled up, Oliver pooped everywhere, the kids fought incessantly, I had to find Helena a pioneer costume and teach Zoe how to drive, I had to find something other than cornstarch to serve for dinner, my aunt fell and then yelled at me because I tattled on her to my parents and then finally, Lost chewed up my cerebral cortex and hocked a loogie with it onto my ambition and before I knew it, three months went by and the whole concept of Stuff I Love fell by the wayside, lonely and neglected. It would occasionally wake me up at 2:00 a.m., and try to get frisky with my brain but my brain was all OH MY GOD, SERIOUSLY? RIGHT NOW? YOU WANT TO DO IT RIGHT NOW? I’M EXHAUSTED. FINE. KEEP IT SIMPLE, NOTHING FANCY. AND HURRY UP.

So moving forward, I’m going to try to pay a little more attention to Stuff I Love in hopes that it will stop waking me up in the middle of the night for some nookie and let me get a decent night’s sleep.

This is my new watch: 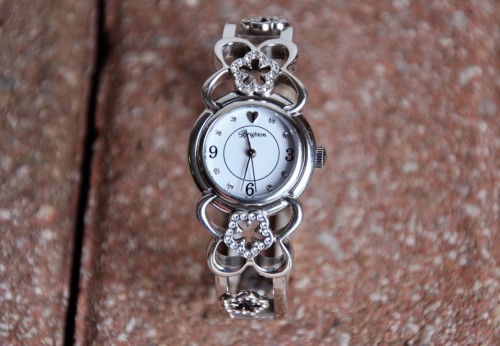 It’s a bangle watch by Brighton and before I say anything more, let me just clarify that I am not a spokesperson for Brighton, no one compensated me for this post because no one pays me to say anything nice about anything and this is probably why I don’t say many nice things. SEE, NATE? IT’S NOT MY FAULT. 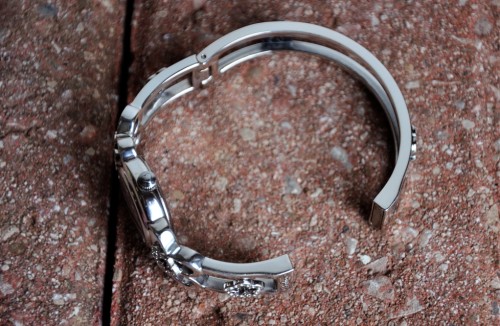 This watch is heavy and chunky with a seamless magnetic clasp, giving it the illusion of a traditional bangle. I adore this watch. Sometimes I appreciate it even more than I do Nate because it will tell me the time whenever I ask it to without prefacing its response with a distracted “Wha? Hang on a sec … OK, now … wait … hold on … d’you need something?” and some frantic scrolling on a crackberry.

This watch was my Christmas gift from Nate although, to be honest, it didn’t look like this when I opened it Christmas morning. On Christmas morning, it looked more like a delicate gold-tone bracelet watch with a traditional jewelry clap and mother-of-pearl face peppered with little diamonds, and it came in a box emblazoned with the name “Citizens.” That particular watch was a very glamorous, lovely watch for a very glamorous, lovely woman somewhere but it didn’t exactly suit the lifestyle of the more practical woman to whom it was gifted, the woman who spent her days banging out useless blog dribble on a computer and waging wars against hard water stains and underarm razor stubble and morons who were genetically incapable of parking between the yellow lines. And, more importantly, it wasn’t a bangle watch.

So I returned Nate’s beautiful watch and went in search of what turned out to be this one, all with Nate’s blessing which was cloaked in an exasperated NO ONE MAKES REAL BANGLE WATCHES ANYMORE! IF YOU WANT ONE, YOU’RE GOING TO HAVE TO DRIVE TO THE END OF THE STREET AND TAKE A LEFT AT THE NINETIES. BRING ME BACK SOME PARACHUTE PANTS. 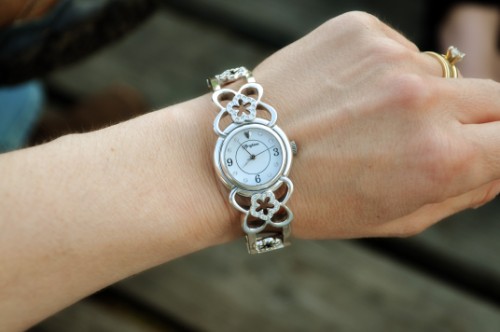 Admittedly, it’s substantial size and weight dwarfs my freakishly scrawny and bony wrist but it’s a small price to pay for a stylish, sturdy watch that has no annoying chain that will snag on my sweaters and bungee jump to the pavement. And chances are also unlikely that it will stow away on a sleeve and enjoy a ride through the permanent press cycle anytime soon. And I honestly think I could bonk a would-be attacker on the head with it and stun him long enough to kick his balls into neighboring Pennsylvania. 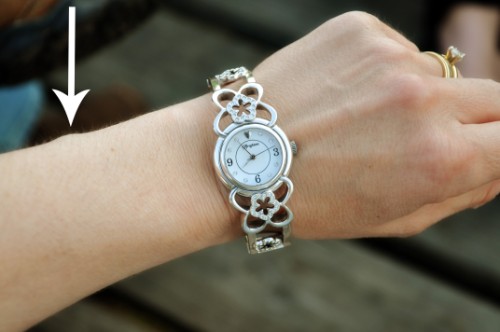 And bonus! When I push it up my arm, it can completely obscure the weird lumpy bump that has copped a squat on my forearm for almost twenty years. I just keep repeating IT’S NOT A TUMOR over and over to myself and it makes me feel better, but only if I do it a là Arnold Schwarzenegger in Kindergarten Cop so it comes out sounding more like IT’S NOT A TOOMAH! Otherwise, it doesn’t work and I wind up freaking out about the whole lumpy bump thing, envisioning all sorts of scenarios including, but not limited to, aliens inserting a monitoring device under my skin to observe how the female member of the species manages to get any rest while sleeping next to her mate who is single- handedly responsible for keeping the alien pods up at night with his snoring.

You can find Brighton accessories here. I love most of their stuff and when it comes to decorating my body, they’re my go-to place for lumpy bump cover-ups. If they ever come out with an industrial strength bra, I’ll be golden.

13 thoughts on “STUFF I LOVE: My Brighton watch. It’s pretty and it covers up the spot where aliens branded me”